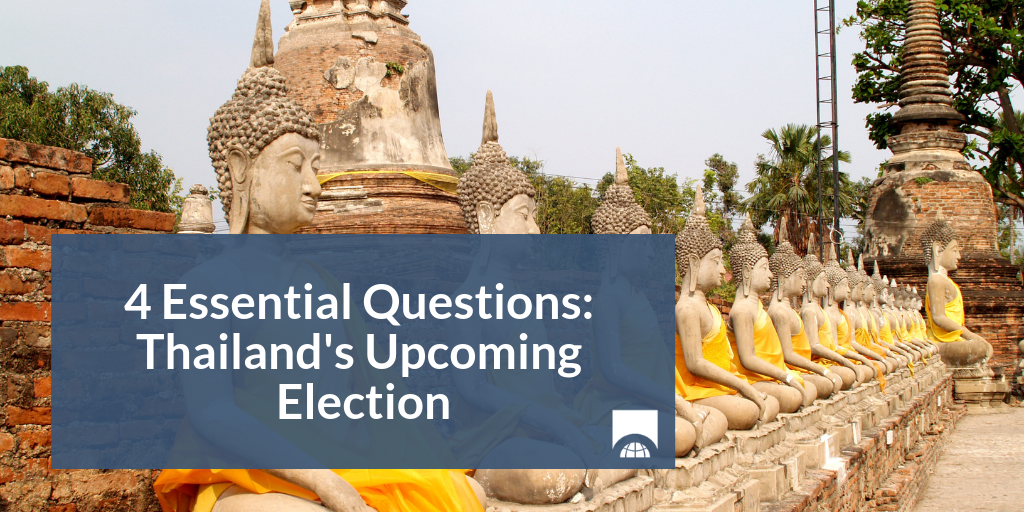 1. Who will be the next prime minister?

Given the number of new voters and parties and the high likelihood that a coalition government will likely be necessary, it is difficult to predict who will be prime minister. However, the military has put considerable safeguards in place to remain in power.

ASG assesses that the most likely outcome is that Palang Pracharat, a conservative pro-military party, will be able to cobble together the 126 seats they need to select the next prime minister with the support of the 250 NCPO appointed senators. Palang Pracharat has nominated current prime minister and NCPO coup leader General Prayuth Chan-O-Cha, but it will need coalition partners to govern. The most likely choice, the Democrat Party, has already stated opposition to Prayuth remaining as prime minister, but if they accommodate Prayuth, they will be in position to potentially extract significant concessions.

If Palang Pracharat polls especially poorly, other candidates to lead a coalition that would be acceptable to pro-military elites could include former prime minister and Democrat Party leader, Abhisit Vejjajiva, or Bhumjaithai leader and long-time political fixture, Anutin Charnivirakul. The reaction of the NCPO to such an electoral defeat, and the response from the Thai populace if they choose to try to overturn the result, will be key to watch.

Whoever is prime minister is likely to face a divided parliament, making governance difficult, and an early election as soon as 2020 to try to break any deadlock is a strong possibility.

2. Where does Thaksin stand in the new era?

Former Prime Minister Thaksin Shinawatra’s party, Pheu Thai, has won every contested election since 2001, despite his exile. Purging Thaksin’s influence from the political scene was a prime motivation for the royalists and military leaders who led coups in 2006 and 2014. For a brief period in February 2019, it looked like a grand bargain had been struck between the exiled former prime minister and the royalist elites who pushed him out of the country, when Princess Ubolratana Rajakanya announced her candidacy for prime minister for the Thai Raksa Chart Party, an ally of Pheu Thai. But within 24 hours of her announcement, her brother King Maha Vajiralongkorn squelched that idea, saying it was inappropriate for her to participate in politics as a member of the royal family, and Thai Raksa Chart was subsequently banned from politics. Pheu Thai now faces long odds to win outright control of government under the new system, although it is likely to be the largest party in the new parliament. As such, Pheu Thai will likely have a powerful voice on national spending priorities.

In the past, Thaksin has backed massive street protests to force a change to the status quo, but Article 44 of the 2017 constitution entitles the military to intervene as they see fit to stop “any act detrimental to national order or security, royal throne, national economy, or public administration.” With this legal intervention on the table and Thaksin’s supporters divided between Pheu Thai and newly formed parties, it is more difficult to organize mass demonstrations and Thaksin’s ability to influence events is limited.

3. How will this election affect the future of Thai politics?

While populism and patronage have long been the prime movers of Thai politics, with most parties competing to lay out what kind of economic largesse they will distribute to different key constituencies, there are signs that future Thai elections are likely to feature an increasing focus on more developed party platforms.

The new Future Forward Party, led by 40-year-old billionaire Thanathorn Juangroongruangkit, has emerged as a potential significant force among young, progressive Thais. If the party wins the 8-10 percent of seats that polls are projecting, it will become a powerful force in parliament. Thanathorn has laid out a platform based on returning Thailand to a full civilian democracy, decentralizing governance, and stepping up anti-corruption measures, and his popularity is a symptom of a growing desire, especially among younger Thais, for political representation that moves beyond patronage. However, the NCPO will remain wary of any change to the status quo, and Future Forward’s leaders face charges under the Computer Crime Act for “uploading false information” to Facebook that could see them jailed and banned from politics. The case will be decided after the elections, and Thanathorn could be more vulnerable if Future Forward is especially successful, but taking action against him could lead to civil unrest.

4. How will the election impact Thailand’s business environment?

Foreign investors have had success in Thailand, the second-largest economy in Southeast Asia, despite years of coups and protests. Political stability has long been seen as key to Thailand’s evolution into a high-income country, and the constitution now entitles the military to take early action to preserve that stability. King Vajiralongkorn’s coronation will take place in early May, and the period between the coronation and the formation of the new government, likely in June, will be key to watch for signs of unrest.

While many of the policies and projects promulgated by the NCPO are likely to continue, such as the investment into the Eastern Economic Corridor and the focus on Thailand 4.0, businesses should be aware that many of the technocrats currently in place in Thailand’s cabinet are likely to be replaced with political appointees, from a diverse range of parties, and Thailand’s already slow economic decision-making process is likely to slow further. If there is significant unrest following the election, or if Pheu Thai pulls off an unlikely victory, it is entirely possible the military will intervene again, this time backed legally by the constitution, and the cycle of instability will start again.