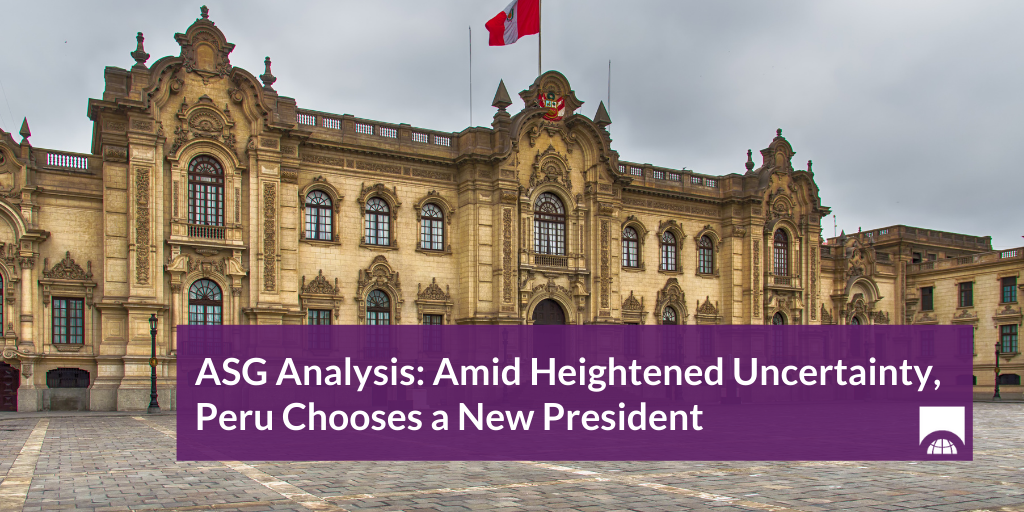 Leftist candidate Pedro Castillo appears increasingly likely to be Peru’s next president. At the time of this writing, with over 99 percent of ballots counted in the runoff election, Castillo holds a lead that hovers around a half a percentage point. His opponent, Keiko Fujimori, has launched a campaign to call the results into question.

Castillo is a political newcomer. A former teacher and union leader, he campaigned on a self-proclaimed Marxist-Leninist platform that has alarmed investors. He has pledged to pursue a constitutional rewrite through a constituent assembly, upend the country’s economic model, and nationalize portions of strategic sectors, like mining.

This is Fujimori’s third presidential bid. The daughter of jailed former President Alberto Fujimori, she is ostensibly a more business-friendly candidate than Castillo but is a polarizing political figure. She also faces pending corruption charges.

The election results reflect widespread disillusionment with politics and dissatisfaction with the candidates. More than 1.2 million voters cast null or blank ballots (over 6 percent of the total). In the first round of the election on April 11, the number of blank or null ballots exceeded the number of votes cast for any single candidate.

The results also reflect regional and urban-rural divides. Fujimori won nearly 65 percent of the vote in the capital city of Lima and 60 percent of the vote in the wealthier, northern coastal areas of the country. Castillo won heavily in states located in the surrounding rural highland areas. These social and political fissures are likely to play an increasingly dominant role in shaping Peru’s operating environment.

Despite the presence of international observers and no independent reports of irregularities, Fujimori’s effort to question the results reduces the chances of a smooth transition of power. ASG expects Fujimori to undermine the legitimacy of the new Castillo government, as she has done after past elections.

The president’s ability to govern will remain a long-term challenge with potential for short-term volatility coming out of the election. He or she will be Peru’s fifth head of state in a five-year period marked by corruption scandals and impeachments, and will enter with a weak mandate. Congress is highly fragmented, requiring the president to negotiate across various parties to implement his or her initiatives. While these dynamics may temper the most radical pieces of the president’s agenda, they will also contribute to the ongoing political instability that has defined Peru’s business climate in recent years.

The incoming president will inherit extremely challenging circumstances. Peru registered the highest Covid-19 death toll per capita in the world and its economy shrank by 11.1 percent in 2020. The pandemic exacerbated longstanding issues of inequality, insufficient investment in and delivery of social services, and corruption. Should Castillo win, he will likely seek to expand the role of the state to address these challenges.

The new Congress will begin its legislative session on July 27 and the president will be inaugurated the following day. While Castillo’s early priorities remain unclear, his rhetoric during the campaign – which frequently attacked key industries such as extractives and agriculture – was a source of initial concern for foreign investors and the local private sector. In recent days, Castillo has struck a more conciliatory tone, promising to maintain dialogue with the business community, preserve central bank independence, and continue paying Peru’s national debt. ASG will be watching to see who Castillo appoints to key positions, including in Office of the President, Ministry of Economy, and Ministry of Mines and Energy.