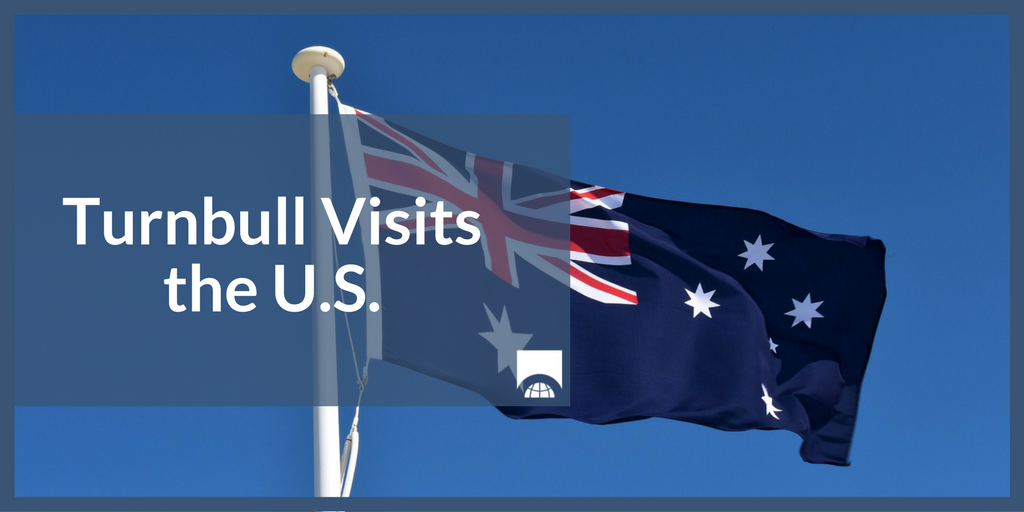 Australian Prime Minister Malcolm Turnbull will visit Washington D.C. on February 23-24. On February 23, he will visit U.S. President Donald Trump at the White House and serve as the keynote speaker at the Annual Winter Meeting of the National Governors Association. The visit has been billed as a celebration of 100 years of “mateship”, from U.S. and Australian troops fighting together in World War I and more recently in Afghanistan. According to the White House, Trump and Turnbull will discuss a “range of shared bilateral, regional, and global priorities, including fighting terrorism, promoting economic growth, and expanding security and defense cooperation in the Indo-Pacific region.”

This is Turnbull’s first visit to the U.S. during Trump’s presidency, although the two leaders met face-to-face at the Asia-Pacific Economic Cooperation (APEC) meetings in Vietnam and the East Asia Summit (EAS) in Manila in November 2017.

Their relationship got off to a rocky start, when a January 2017 call erupted into an argument over an agreement made under the Obama administration for the U.S. to accept 1,200-2,000 refugees from Australia. A leaked transcript of the call raised concerns about the future of the relationship. Another early thorn in the relationship was then-High Commissioner to the UK Alexander Downer’s role in spurring the investigation into the Trump campaign’s ties to Russia by alerting his U.S. counterpart that Trump campaign official George Papadopoulos had told him over drinks that Russia had stolen Hillary Clinton’s emails.

The U.S.-Australia relationship seems to have weathered these irritants reasonably well, however, and the two leaders will undoubtedly laud the strength of the alliance. The U.S. remains a critical security partner for Australia, where many in the public and government have become increasingly concerned over the country’s strong economic reliance on China. Turnbull stated in January, “the relationship is in excellent shape and the connections between Australia and the United States are so diverse, numerous, so strong, and indeed, our relationship through the State Department is excellent as well.”

President Trump recently nominated Harry Harris, who is a well-regarded admiral in charge of the U.S. Pacific Command (PACOM), as the next ambassador to Australia, filling an important gap in U.S. diplomatic representation. Harris made news during his tenure as PACOM commander by publicly clashing with the Obama administration in advocating a more forceful response to Chinese militarization projects in the South China Sea. In his remarks to the House Armed Services Committee on February 14, 2018, Harris stated that he fears China “will now work to undermine the rules-based international order” and praised Australia for its work to “anchor peace and stability in the region.”

Australia’s role in the Indo-Pacific

After Trump withdrew from the TPP early in his tenure and seemingly rejected the Obama administration’s “rebalance” to Asia, analysts questioned whether the U.S. would retreat from the Asia-Pacific region or whether the Trump administration would develop its own strategy for deepening engagement. During his five-country Asia swing in November 2017, Trump offered a partial answer by repeatedly referencing the concept of the “Indo-Pacific” to counterbalance China’s expanding influence. The Trump administration has provided few details, but the concept seems to mirror the Quadrilateral Initiative (Quad) that Shinzo Abe first advocated for in 2007. The concept centers on building an alliance between the “like-minded democracies” of the U.S., India, Japan, and Australia to ensure a united and strong response to Chinese provocations in the region, including in the South China Sea.

While the Australian government has stressed that it does not need to definitively choose between China and the U.S., the government’s 2016 defense white paper and 2017 foreign policy white paper underscore Australia’s interest in the U.S. remaining the strongest Asia-Pacific power.

The original Quad fell apart after then Australian Prime Minister Kevin Rudd withdrew in 2008, concerned that it would affect Australia’s economic relationship with China. However, the political environment for Turnbull may be better, especially since public concern over Chinese influence in Australia has risen. Chinese companies have invested in many infrastructure assets in Australia, including in critical ones such as the Port of Darwin, prompting the Australian government to strengthen its review process for foreign investments in key infrastructure assets. In addition, Chinese businessmen have contributed significantly to Australian political campaigns, leading the current government to draft a bill to address the issue of foreign influence in Australian politics. Also, nearly one in ten students in Australian universities are Chinese and there have been high-profile cases of Chinese students objecting to certain classroom content involving Taiwan, sometimes with the tacit or explicit backing of the Chinese government. Universities must deftly handle these controversies since Chinese students pay higher tuition fees than Australians and contribute significantly to the country’s GDP.

The Turnbull government may view the Quad as the best way to support a rules-based order in the Asia-Pacific while pushing back against Chinese influence at home. The Quad could also serve Australia’s interest in enhancing ties with India. Australia is expected to resume the Malabar naval exercises in the Indian Ocean with the other three members of the Quad soon, and when Turnbull visited India in April 2017, he offered support for Indian investment in coal mining in Australia. Increasing India’s consumption of Australian commodities will take on added importance if the Turnbull government strongly backs strategic initiatives that could generate Chinese ire.

Economic Priorities for the Visit

Prime Minister Turnbull will seek to court U.S. businesses on this visit, both to boost Australia’s economy and to diversify economic dependence away from China. The U.S. is Australia’s third largest trading partner after China and Japan. The U.S.-Australia FTA took effect in 2005.

Turnbull will travel with a delegation of Australian CEOs who are interested in the U.S. market, particularly in the energy and infrastructure space. Many bilateral deals will likely be announced, but Turnbull may face less pressure to announce large U.S. goods purchases than some other Asia-Pacific leaders since the U.S has a trade surplus with Australia of nearly $30 billion.

To further boost bilateral ties and U.S. engagement in the region, Turnbull may encourage Trump to join the CPTPP and consider joining RCEP. Along with Japan, Australia has been a key driver in pushing forward the CPTPP, which is expected to be signed in March. While Turnbull has previously stated that he “isn’t counting on a U.S. return to TPP,” recent indications are that Trump’s stance towards the agreement is softening.

The trip serves a number of domestic purposes for Turnbull. On the economic front, he has proposed a significant corporate and personal income tax cut, similar to what was recently passed in the U.S., to be legislated before Australia’s next election in 2019. While the cuts are less drastic than those in the U.S. and rely on a commitment to return Australia’s budget to a surplus by 2021, the Australian press and public have heavily criticized the proposed corporate tax reforms. ASG anticipates that the prime minister will use the visit to laud the effects of the U.S. tax cut and argue that a similar cut is necessary for Australia to remain competitive. He will be supported by a strong business delegation, led by the Business Council of Australia, which is campaigning for the tax cuts.

Turnbull’s White House visit also comes at a time when his coalition government is in turmoil. The Daily Telegraph revealed that Deputy Prime Minister and Leader of the Nationals Joyce’s former media advisor, Vikky Campion, is pregnant with the married Joyce’s child. This has been followed by revelations that Joyce approved Campion’s move from his office into higher-paying staffer roles within the government, arguably in breach of ministerial standards. Further, the pair are reportedly living rent-free in housing provided by a wealthy businessman.

Prime Minister Turnbull has publicly criticized Joyce’s behavior and announced on February 14 that Joyce would not serve as acting prime minister while he traveled to the U.S. Instead, Joyce was placed on a week’s leave and directed to “reflect.” This was widely interpreted as an indication that Turnbull expects Joyce to resign.

Turnbull’s Liberal Party (a broad church of conservatives and moderates) has a long-standing arrangement with its coalition partner, the National Party, that dictates that the leader of the Nationals serves as deputy prime minister. The Nationals are reportedly still debating whether to remove Joyce as their leader. The center-left Labor Party, which has led the government coalition in opinion polls for some time, has used the scandal to criticize both parties.

Prime Minister Turnbull will likely feel extra pressure to make positive news during his trip to the U.S., in hopes that he can change the media narrative and regain momentum on his policy agenda.