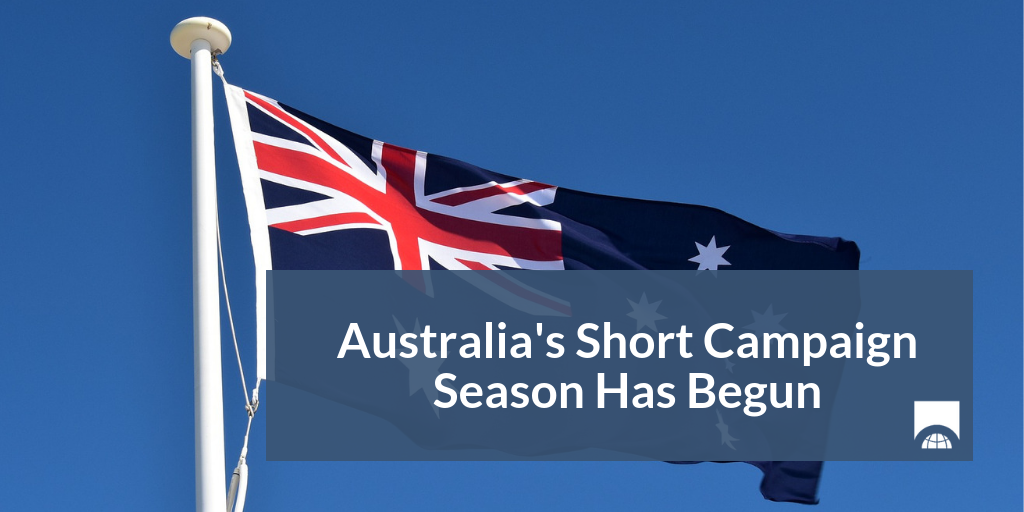 On April 10, Prime Minister Scott Morrison called a federal election for May 18, pledging that the Coalition of the Liberal and National parties will fight Labor on the economy and provide individuals with a “fair go”, pushing its support of small and medium-sized businesses.

Given the presidential style of modern-day Australian politics, Morrison has pitched the next five weeks as a personal battle against opposition leader Bill Shorten. While Shorten goes in to this election with a far lower personal approval rating, his Party is a strong favorite to win. In a country which loves a punt, online bookmaker Sportsbet has Labor at $1.16 compared to the Coalition at $4.85. Public opinion polls over the past three years have consistently placed the Labor Opposition ahead of the Coalition. Shorten counters the case around personal popularity by reminding people that Labor is a “team” in contrast to the government, which dumped former Prime Minister Malcolm Turnbull last August. Labor has built a theme around “fairness,” promising to increase taxes on the wealthy, introduce policies aimed at removing concessions for share ownership among retirees, and ending incentives for owners of investment properties.

However, this election is not just a story of two men and two parties. Independent Members of Parliament and Senators will have a massive influence on the next parliament. Independent candidates are running across the country and in some very notable cases, such as in the seat of Warringah, held by another former Liberal Prime Minister, Tony Abbott, upsets are predicted. In the Senate, the Greens will have a strong presence, currently polling around 10 percent, and there will be a handful of unpredictable independents who will make the passage of legislation difficult for a new administration.

Australia’s political system is described as “Washminster,” reflecting a Senate that mirrors the Washington, D.C. model and a House of Representatives more consistent with Westminster’s House of Commons. With the Australian Electoral Commission adding a new seat, there are now 151 seats in the House of Representatives and, with a half-Senate election, forty Senators’ spots up for grabs on May 18 across Australia’s six States and two Territories. Voting is compulsory in Australia and a large number of first-time voters will be at the ballot box in May.

With campaigning now underway, caretaker conventions begin and will be in place until the result is clear, or when a change of government is completed. The conventions aim to avoid government actions that would bind successor administrations and prevent the government from making major policy decisions, announcing significant appointments, and entering into major contracts or undertakings. Any “big decisions” require effective consultation with the opposition, but definitions are loose, and the Department of the Prime Minister and Cabinet has stated that the conventions are neither legally binding nor hard and fast rules: "Their application in individual cases requires judgment and common sense."

All politics is local, and Australia’s 2019 election will continue that trend. The big issues for the election are cost of living, which morphs into the issues of low wages growth, congestion and worsening infrastructure in the cities and access to affordable healthcare and education. Scott Morrison maintains these services can only be provided based on a strong economy while Bill Shorten has emphasized his view that the economy is currently favoring the “haves” rather than the “have nots”. Bill Shorten’s rhetoric positions younger voters as “have nots,” arguing in his April 2019 budget reply speech that “the intergenerational bias that the tax system has against young people must be called out.”

Labor policies pitching to these voters include winding back negative gearing tax concessions in an effort to support new home buyers over investors. Labor will also add a standard minimum thirty percent tax rate on distributions from discretionary trusts and end cash refunds for dividend imputation credits. This will negatively impact retirees and pensioners, who the Government argue have worked hard and saved for retirement. The millennial versus baby boomer debate is not new in Australian politics and will play out across many policy areas during the campaign.

Managing the rise of China, Brexit, the fall-out of President Trump’s trade wars and crises in places like Yemen, Myanmar, and Venezuela are all matters of international importance but will not sway votes materially in the campaign. Climate change policy and migration are perhaps two global issues which will have some impact, but their implications will be based more around fear rather than environmental or humanitarian good. For example, Labor Party’s efforts to speed up the acceptance of electric cars is being targeted by the Coalition as anti-farmer and a threat to Australian’s love of utility vehicles or “utes.” On immigration, the Coalition recently announced reduced migration numbers and new measures to ease congestion in the big cities of Sydney and Melbourne while also returning to its traditional refrain of being “strong on border control.”

Polling released the week of April 15 has the primary vote equal between the Coalition and Labor Party at 39 percent apiece. The extremist One Nation Party vote has collapsed in recent days following alarming media revelations it sought large donations from the U.S. based National Rifle Association, but its voters are likely to largely choose other Coalition parties. However, the Greens vote at 9 percent, and as they are expected to join with Labor, which would produce a comfortable 52 to 48 percent two party preferred outcome in Labor’s favor. While reiterating a uniform swing is unlikely, this latest analysis continues to support widely-held predictions of a Labor victory. Because of compulsory voting in Australia, polling is more reliable and smaller leads are more significant than in other democratic nations.

The election will be won or lost along the eastern seaboard in Queensland, New South Wales and Victoria. Victoria looks likely to turn strongly against the Coalition Government and the Government is most worried about losing seats there. Health Minister Greg Hunt is under very serious threat of losing in his previously safe coastal constituency. New South Wales has just elected a Coalition State Government and could bring slightly better news for Morrison. Queensland could be a story of north and south with the more radical elements at the Top End going for conservative forces while the small “l” liberal forces around Brisbane are wanting a change.

South Australia and Tasmania only have a handful of seats and matter little for a significant swing, while Western Australia is predicted to favour the Labor Party. The Australian Capital Territory and Northern Territory, like the small states, will have little impact but nevertheless are likely to maintain status quo.

Anything can happen in a campaign and globally we have seen opinion polls wrong on Trump and Brexit. But even with all of this in mind, Australia looks to be set for a change of government in May.

If Labor wins and Shorten forms the government there will be significant changes to the operation of the public service in Canberra, even if much of the personnel remains the same. Business will see an increased role of the public sector in key policy areas such as health and education and the Party’s tendency to introduce further levels of regulation, rather than less, will create new frameworks. The departments of Prime Minister, Treasury and Finance will lead much of this overhaul in conjunction with advice from regulators, particularly in the wake of Royal Commission into Misconduct in the Banking, Superannuation and Financial Services Industry. It will be some weeks after the election before there is a realigned bureaucracy, inevitably featuring new heads of departments as well as other changes at senior levels, so it is premature to foreshadow the real implications. Most of the Opposition’s shadow ministry is predicted to remain in place, although Shorten will have to find a frontbench spot for at least former NSW Premier Kristina Keneally, who already has a high profile during the early days of the election campaign.

In the less likely event of a Coalition victory, Morrison will be unassailable and able to construct the Government in any way he wishes after the dumping of Turnbull. The Right of the Party is considered to be more of his natural home and to have more influence over him, given his conservative position on many social policies.

If the Coalition does lose, deeply divisive fights between the moderate and conservative elements of the Liberal Party are likely, as well as a potential break-up of the Coalition relationship activated by the National Party partners. In short, the reverberations within a Liberal and National Opposition will be felt for some time.