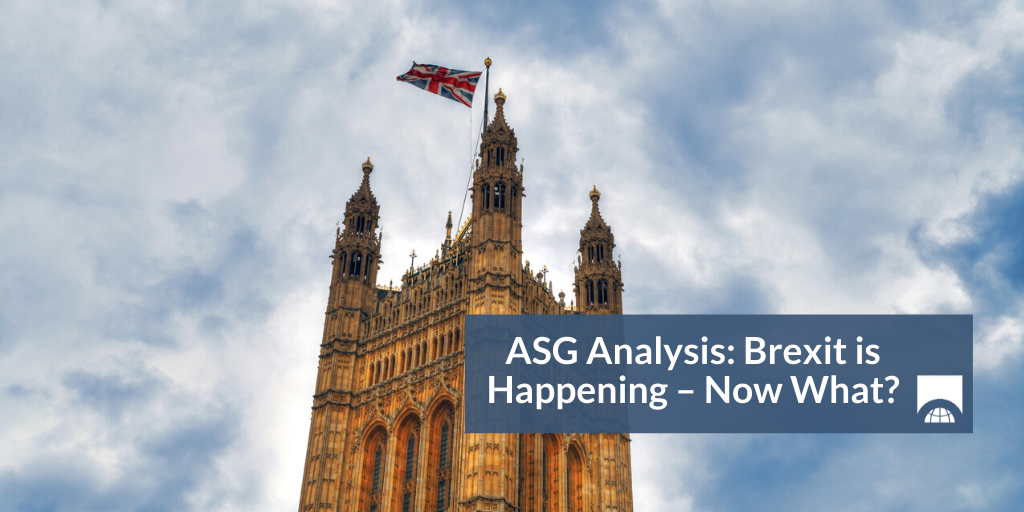 Three key questions must be answered for post-Brexit Britain to come into focus:

Is his goal Singapore-on-the-Thames (low tax, low regulation, creation of state champions), at the price of restricted access to the Common Market? Or something more like Norway (fully integrated), at the cost of accepting EU regulations? Given the size of his parliamentary majority, Johnson has room to maneuver. Businesses hoping to work in the UK might use the transition period to express their preferences in Whitehall.

The prospect of another suitor is supposed to provide leverage. The EU seems unconcerned that a Trump administration will offer enough to lure the UK away from the majority of its current trade, which is with the EU. The UK faces tough choices between the two regulatory regimes.

Johnson wants a deal by the end of the transition period – December 31, 2020 – so he can begin focusing on domestic priorities. Unless the UK acquiesces to EU demands, it is virtually impossible for a comprehensive deal to be negotiated and ratified in this timeframe. Johnson has ruled out an extension, which he must request by July 1. They could reach a limited agreement focused on goods, with remaining issues to be addressed later. If the sides fail to reach any agreement, the UK will crash out with no deal and return to WTO trading terms.

At 11:00 pm GMT today, three-and-a-half years after Britons voted for Brexit, the UK leaves the European Union. Boris Johnson’s December 12 reelection with an 80-seat majority, coupled with his renegotiation of the unpopular “backstop” for Northern Ireland, finally broke the months-long deadlock over the Withdrawal Agreement Bill, which received final parliamentary approval on January 22. The legislation implements the Brexit deal as British domestic law and covers divorce payments to the EU, citizens’ rights, customs arrangements for Northern Ireland, and the transition period. The European Parliament voted to approve the UK’s withdrawal on January 29, removing the final hurdle to the UK’s exit, to jubilation from pro-Brexit British Members of the European Parliament, including Nigel Farage, and a serenade of Auld Lang Syne by their sad colleagues.

Beginning February 1, the UK will no longer participate in the EU’s political institutions, including the European Parliament and Council of Ministers. However, there will be an 11-month transition period to enable businesses and citizens to adjust to the new realities (e.g., allowing goods to reach their destinations, concluding legal proceedings).

Little will visibly change during this time: the UK will remain in the EU’s customs union and the single market, and citizens can continue to work and travel freely between the UK and EU. The UK will have no say in making EU rules, but it will be bound by them during this period; it will also continue to enjoy the benefits of membership. Most importantly, the transition period will give the UK and the EU time to determine the scope of their future relationship.

Negotiations are expected to begin in early March. The Withdrawal Agreement Bill gives Johnson 30 days to publish his negotiating objectives. EU member states are expected to agree on their mandate February 25, the core of which will be to safeguard the common market and the rights of EU citizens.

The main task will be reaching agreement on a trade deal addressing goods and services, as well as regulations on health, fishing, farming, banking, science, education, aviation, transportation, and data exchange. The British government wants a loose deal focused on tariff- and quota-free trade, frequently pointing to the recently concluded EU-Canada free trade agreement as a model. Chancellor Sajid Javid confirmed the government’s election commitment to diverge from EU rules.

The EU has set “zero dumping” conditions as the prerequisite for “zero tariffs and zero quotas”; it will also insist on a level playing field, including social and environmental standards, state aid, and tax. This will be a major area of disagreement in negotiations, as the UK desire to diverge from EU regulatory standards and the EU commitment to protect the sanctity of the common market put the two sides’ positions in direct conflict.

The 11-month transition period allows limited time for the sides to reach a comprehensive agreement. (By comparison, the EU-Canada agreement took seven years.) The British government could ask the EU to extend the transition period for one or two years, but it must do so before July 1. The EU has made clear that there will be no extension granted after that date. Johnson has pledged not to seek an extension and included a provision in the Withdrawal Agreement Bill that prevents the government from making such a request, though it could be amended later.

This timeframe could affect the scope of any agreement; EU Trade Commissioner Phil Hogan has said a comprehensive trade deal will be impossible to negotiate by the December 31 deadline. If the UK and EU reach a “mixed agreement” — containing matters handled by the EU as well as issues governed by “shared competence” between the EU and member states — then it must be ratified by all 27 member states according to their constitutional provisions, which in some cases includes regional parliaments. Alternatively, the sides may be required to focus on a limited deal (or set of mini-deals) that are within the competence of the European Commission to approve. If the sides fail to reach agreement by December 31, the consequences would be like the “no-deal Brexit” feared last year, as the UK would default to trading with the EU on World Trade Organization (WTO) terms.

In addition to trade, the sides must agree how to proceed on security, law enforcement, and judicial cooperation (e.g., the UK will leave Europol and the European Arrest Warrant). On the domestic side, the British government must pass legislation to implement Brexit in four key areas that are currently regulated by the EU: new immigration laws to replace freedom of movement and new legislation for agriculture, environment, and trade. The government has also pledged bills on fisheries, financial services, and private international law.

From February 1, London will be able to begin negotiating trade agreements with third countries. The government has indicated its intention to seek a trade deal with the U.S. alongside its discussions with the EU, which raises questions about bandwidth. (The UK will ideally clarify its future economic relations with the EU before finalizing such deals, as it cannot be aligned in regulatory terms with multiple systems.) Secretary of State Mike Pompeo met Johnson in London on January 30, while Johnson is reportedly traveling to Washington to meet with Trump in February. The UK will confront tough demands on issues such as pharmaceutical pricing, food standards, and environmental issues. Despite the Trump administration’s support for Brexit and the Prime Minister personally, Johnson is likely to discover that the “special relationship” does not count for as much as he would wish in negotiations.

More from ASG on Brexit: