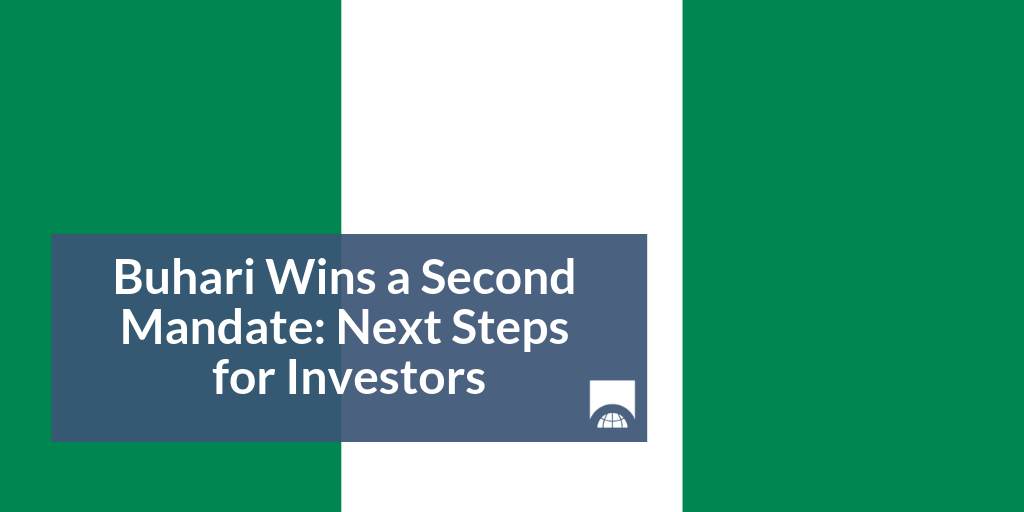 In the early hours of Wednesday, February 27, Nigeria’s Independent National Electoral Commission (INEC) declared President Muhammadu Buhari of the All Progressives Congress (APC) the winner of the February 23 presidential election.

Buhari’s success was driven by high turnout in his strongholds in the north and increased support for the APC in the south-south and south-east geopolitical zones, which historically have been the base of the PDP’s political support.

INEC failed to deliver on expectations that the electoral commission would build on the strong gains made in 2015 to further improve the country’s electoral procedures and integrity. Voter turnout was 35.6 percent, a historic low, and varied significantly across regions. The northwest, the epicenter of the Buhari’s political support, saw 52.33 percent voter turnout, while only 20.42 percent of registered voters participated in the southeast, a PDP stronghold.  INEC’s decision to postpone the election just hours before polls were set to open may help explain the poor turnout, especially in the south.

Despite the one-week delay, which INEC argued was necessary to address logistical challenges, the 2019 presidential and National Assembly elections were fraught with familiar irregularities, such as inadequate voting materials, malfunctioning technology, voter intimidation, and violence. Some voters and poll watchers have also alleged electoral fraud, comparing the 2019 elections to the 2007 polls, which most analysts agree were the worst elections in the history of Nigeria’s Fourth Republic. Nonetheless, the official outcome of the presidential vote falls within the margin of error established by civil society-driven parallel vote tabulation processes. The United States, the United Kingdom, and other countries have congratulated President Buhari and assured Nigerians that they can “have confidence” in the results.

Shortly after INEC declared President Buhari the winner, PDP candidate Atiku Abubakar put out a statement in which he called the election a “sham” and rejected the results announced by the Commission. Atiku also refrained from calling President Buhari to congratulate him, as is customary. In his statement, Atiku said that it was clear that the results had been manipulated in many states. He also argued that voting was disrupted, and that voters were intimidated in PDP strongholds. In addition, Atiku questioned the tallies in northern states facing security challenges, where records showed higher voter turnout than in peaceful states in the south.

The PDP is now expected to challenge the outcome of the elections through judicial channels, a decision the party had foreshadowed during the campaign. This could lead to a constitutional crisis. President Buhari unilaterally suspended Chief Justice Walter Onnoghen on January 25 for alleged corruption and failure to declare his assets. Only one day after his suspension, Acting Chief Justice Mohammed Tanko set up election tribunals, which will hear Atiku’s case against the President. Many PDP supporters already see these tribunals as illegitimate and could argue that the tribunal’s rulings hold no merit, especially if they strike out Atiku’s case.

Major shifts in the National Assembly

The elections will result in major shifts and a changing of the guard in Nigeria’s legislative body. Although results are still being collated, the APC is on track to hold at least 65 of the 109 available seats in the Senate and maintain its majority in the House of Representatives. As a result, President Buhari will be able to fully pursue his legislative agenda, to the degree that one exists. As the new National Assembly resumes in May, the APC will seek to ensure that President Buhari has an ally as Senate President. Current Senate President Bukola Saraki lost his re-election bid for Kwara Central Senatorial Zone and will not be returning to the Senate. There is already talk over who will assume leadership, and the APC is expected to keep its zoning formula, which allocates the position to a senator from the north for the next four years.

The Nigerian National Assembly has emerged as a major check on executive power, especially since the Senate thwarted President Olusegun Obasanjo’s attempts to seek a third term in 2007. Over the past four years, the tension between the National Assembly and the Presidency peaked, especially after Saraki won the Senate Presidency against APC establishment wishes. Often defying Buhari, Saraki pursued an aggressive business-friendly legislative agenda as he sought to secure his own legacy and use the office as a springboard for the Presidency.

This time around, if Buhari is successful in securing an ally as Senate President, policy will likely be driven by the President’s inner circle—and the legislature will revert to a role rubber-stamping the President’s policy agenda. The President could also continue his use of executive orders (EOs), which were put to good use during the “cold war” with the Saraki-led National Assembly. Some of these EOs had positive benefits for the business community, especially EO1, which continues to be implemented and is focused on improving the business climate.

The odds-on-favorite as Senate President will be Senator Ahmed Lawan of Yobe State, who is the current Senate Majority Leader and the longest-serving and highest-ranking member in government from the defunct All Nigeria People’s Party (ANPP), a key part of the APC coalition. Another name making the rounds is Senator Abdullahi Adamu, a strong ally of the President and former governor of Nasarawa State. Senator Ali Ndume from Borno State is also another strong candidate. Beyond the Senate Presidency, there will also changes in key committees relevant to the private sector, where Saraki had placed key allies. Most of these actors have either failed to return to the Senate or could be sidelined under new leadership, including:

Speaker of the House of Representatives Yakubu Dogara managed to win re-election on the platform of the PDP but may not be able to build a broad enough coalition to retain his leadership position. Femi Gbajabiamila, the House Majority Leader from Lagos State who was the party establishment’s pick to serve as Speaker in 2015, is likely to succeed him.

Investors should watch for symbolic gestures

The Nigerian Stock Exchange’s market capitalization fell N85 billion ($278.7 million) when trading opened on Tuesday, January 26, as it became clear that President Buhari would return for a second term. This occurred as investors, who had anticipated an opposition victory, pulled their money from the stock market. It also reflects the business community’s negative perception of the current government.

The Buhari administration will need to radically alter its macroeconomic approach, liberalize the economy, and maintain an aggressively business friendly environment to incentivize investors to take advantage of Nigeria's economic potential. Investors should watch for certain developments that offer insights into the government’s prioritization of economic reform, including:

On March 9, Nigeria will hold gubernatorial and State House of Assembly elections to conclude the 2019 general elections. There are several tight matchups in several states across the country including Akwa Ibom, Benue, Imo, Kwara, Plateau, and Ogun states. Investors should pay specific interest to the “turf wars” in economic centers including:

Lagos is the economic engine of the Nigerian economy – if it were a country, Lagos would be the fifth largest economy in Africa. Since 1999, it has been controlled by APC National Leader and former state Governor Bola Ahmed Tinubu and his loyalists. Last year, Tinubu had a much-publicized falling out with incumbent Governor Akinwunmi Ambode. This led Tinubu, Lagos’s political godfather, to throw his approval behind Lagos State Development and Property Corporation CEO Babajide Sanwoolu, who soundly defeated Ambode in the party primaries in October. Sanwoolu, now known as the “Governor-in-waiting” will face Jimi Agbaje, who is running for the second time as the PDP candidate, on March 9.

In the presidential contest, the PDP had hoped to deal a massive blow to Tinubu by winning Lagos State. In 2015, then President Goodluck Jonathan lost to President Buhari by only 100,000 votes in Lagos, and party strategists believed that growing disapproval with the APC government could boost turnout among Lagos’ non-Yoruba population, who tend to favor the opposition. However, the APC won the presidential election in Lagos with similar margins again this week, and Senator Oluremi Tinubu, wife of Bola Tinubu, was re-elected for a third term in the Senate. There were reports of voter suppression and intimidation in last week’s elections, which allegedly targeted PDP strongholds. The gubernatorial election is the PDP’s last chance to boost turnout and hit back at the Tinubu dynasty, especially as Bola Tinubu’s name begins to be thrown around as a major contender for the APC’s presidential nomination in 2023.

Kano is the economic center of northern Nigeria. Incumbent APC Governor Abdullahi Ganduje and former Governor and incumbent Senator Musa Rabiu Kwankwaso had a major falling out and are now in a battle for influence in the state. Kwankwaso defected from the APC to the PDP in July 2018 and launched an unsuccessful attempt to become the PDP’s presidential nominee.

Now, badly bruised by the PDP’s humiliating defeat in the 2019 presidential elections in Kano, he will be looking to reassert the PDP’s influence by electing his son-in-law and the PDP nominee, Abba Kabir Yusuf. Ganduje, meanwhile, benefits from support from President Buhari. He is an important ally of President Buhari, who has stuck by Ganduje, despite the governor’s waning popularity amid corruption allegations against him late last year.

Incumbent Kaduna Governor Nasir El Rufai has articulated a grand vision to revive Kaduna’s moribund industries. In pursuit of this goal, El Rufai - a Harvard-educated technocrat - has adopted global governance best practices in his leadership of Kaduna State and managed to attract significant international investment to the state in his first term. Under his leadership, Kaduna has pursued deep reforms in education and leads the way in government investments in human capital development.

However, El Rufai is perceived by some to have a religious bias against Christians. As a member of President Buhari’s inner circle, he has gone to extreme lengths to defend the President who also struggles with that perception. In November 2018, further aggravating existing tensions in a state deeply divided across religious and cultural lines, Governor El Rufai chose Hadiza Balarabe, the Executive Secretary of the Kaduna State Primary Healthcare Development Agency (NPHCDA), to replace outgoing Deputy Governor Bala Bantex as his running mate. His decision created a Muslim-Muslim ticket, and while El Rufai has stressed that he made his choice on merit, key stakeholders including influential religious and traditional leaders have said that his choice was “tone deaf” given Kaduna State’s deep historical and ongoing socio-religious tensions. These tensions have boosted the PDP’s Isa Ashiru’s chances of being a spoiler, especially if the PDP can drive turnout and leverage deep anti-El Rufai sentiment in southern Kaduna.

Rivers State is the hub of the oil-producing Niger Delta region of Nigeria. Incumbent PDP Governor Nyesom Wike and former Governor and current Minister of Transportation Rotimi Amaechi have a very tense relationship, which led to violence in the 2015 polls. Since then, Wike has gained even more relevance within the PDP, especially as a major financier of the party. A court order restricts the APC from running any candidates in the state, so Wike should win his re-election easily, though tension with the APC government can be expected to continue in Wike’s second term.