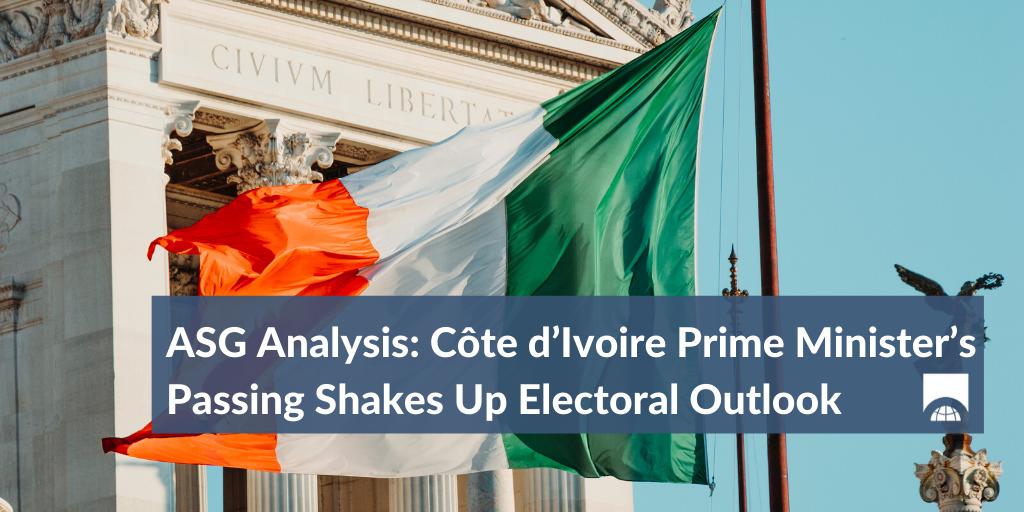 Despite Covid-19, Cote d’Ivoire has remained steadfast in moving forward with plans to hold presidential elections in October 2020. Early in the electoral process, speculation over whether President Alassane Ouattara would attempt to stand for an unconstitutional third term was rampant. Last December, Ouattara declared his intention to participate in the elections should former Ivorian presidents and opposition members Laurent Gbagbo and Henri Bédié opt to run. International and local political pundits let out a collective sigh in relief this March when Ouattara announced that he would not seek reelection, helping to avoid a major constitutional crisis. But the sudden death of Prime Minister Amadou Gon Coulibaly on July 8 has reignited uncertainty over Ouattara’s candidacy and the election in general.

Prime Minister Gon Coulibaly was widely expected to stand as the presidential candidate for Ouattara’s party, the Rally of Houphouëtists for Democracy and Peace (Rassemblement des houphouëtistes pour la démocratie et la paix—RHDP) but certain factors such as Gon Coulibaly’s untested political acumen and health concerns complicated the RHDP’s choice. Gon Coulibaly’s death from a heart attack during a cabinet meeting came two days after his return to Côte d’Ivoire following two months of treatment for an unspecified heart condition in France. His death throws the RHDP’s candidate nomination process into turmoil. Notably, analysts question whether President Ouattara will walk back his promise not to stand for a third term and instead seek the RHDP nomination. A small group of senior RHDP leaders are pressing the president to do so. Ouattara’s reemergence as a candidate could send Côte d’Ivoire into a crisis since there is a debate over whether the current constitution, approved by referendum in 2016, allows for a third mandate. Should he opt to run, Ouattara’s candidacy could increase the potential for electoral violence as campaigning intensifies.

There are murmurings, however, that Ouattara may be disinclined to run. Instead, he may opt to designate a new successor in Gon Coulibaly’s place to contest the RHDP ticket, such as Minister of Defense Hamed Bakayoko, a highly regarded politician who is well-respected within the Ivorian military apparatus. Bakayoko had assumed the role of acting prime minister during Gon Coulibaly’s absence in France and has become increasingly influential over the past five years. There are also rumblings that Vice President Daniel Kablan Duncan, a classic technocrat in Gon Coulibaly’s style, could emerge as frontrunner, as could presidential Chief of Staff Patrick Achi. The sudden death of Gon Coulibaly opens the possibility that any number of senior RHDP figures will jockey to win the position of party standard-bearer, complicating what was previously expected to be a straightforward nomination. The RHDP previously announced plans to formally designate its flagbearer at an investiture ceremony in early August, leaving time for Ouattara to reenter the fray or designate a new successor.

Will the fragmented opposition align behind Bédié?

Arguably the biggest competitor to the RHDP’s eventual candidate will be former Ivorian President Henri Bédié, who announced his candidacy in June. The octogenarian politician, sometimes referred to as the “Sphinx of Daoukro” in reference to his age, is the standard-bearer for the opposition Democratic Party of Côte d’Ivoire—African Democratic Rally (Party Démocratique de la Côte d’Ivoire—Rassemblement Démocratique Africain – PDCI), the party of Ivorian founding father Félix Houphouët-Boigny. Bédié’s lengthy political career and close association with former President Houphouët-Boigny gives him substantial name recognition and a vast network to support his presidential bid. Opponents, however, call for the transition of power to a younger generation—a need that Ouattara himself noted as a reason for not pursuing a third term in office. Bédié’s 2020 electoral prospects will largely rest on his ability to manage and unite an increasingly fragmented opposition.

Several other Ivorian political heavyweights will also have significant influence over the electoral process. The most controversial of these figures is undeniably former President Laurent Gbagbo. The ongoing legal fight over Gbagbo’s acquittal for crimes against humanity by the International Criminal Court (ICC) makes it unlikely that he will run in 2020. As a result, he will likely guide his party, the Ivorian Popular Front (Front Populaire Ivoirien—FPI), to designate a local candidate to represent the party. Incidentally, the equally polarizing wife of Gbagbo, Simone Gbagbo, currently serves as vice president of the FPI. Speculation is growing that she or another party stalwart will make a late entrance into the race. Additionally, former President of the National Assembly Guillaume Soro has declared his intention to compete in the October elections. Soro, a former rebel leader and one-time political ally of President Ouattara, was tried and sentenced in absentia to 20 years in prison in April for embezzlement and money laundering. Now living in exile in Europe, Soro has stated his intention to compete in the 2020 elections. However, since Soro remains subject to arrest should he return to Côte d’Ivoire, it is unlikely he can contest the election. For now, analysts predict that in the run up to the election Soro could aim to forge a political alliance with Bédié’s PDCI to try and defeat the incumbent RHDP.

In a country that has never seen a peaceful transition of power since independence in 1960, Cote d’Ivoire’s fluid political jockeying is setting the stage for a potentially fraught electoral process. The integrity of the Independent Electoral Commission (Commission Électorale Indépendante - CEI) and the Constitutional Court will be paramount. In January 2019, President Ouattara charged former Prime Minister Gon Coulibaly with reforming the CEI’s central committee—a process civil society advocates alleged was aimed at increasing government’s control over the committee’s composition. Any reforms to the CEI must be managed carefully. Côte d’Ivoire’s 2010 post-electoral crisis was partially triggered when the CEI announced provisional results later declared invalid by the Constitutional Court. Accordingly, the composition and perceived independence of the CEI will be critical to ensuring the presidential election’s legitimacy.

As October elections approach, the RHDP is without a clear candidate, providing the opposition with an opportunity to gain momentum. To do so, the anti-Ouattara coalition will need to coalesce around a single candidate, likely Bédié. Otherwise, the opposition risks falling victim to internal political jockeying and hampering their electoral prospects in the process. In the immediate term, analysts will largely remain focused on Ouattara, as his decision whether to re-enter the electoral fray will have cascading effects across the Ivorian political landscape.