Key Themes and Components of the Congress

The Party Congress of the Communist Party of Cuba (Partido Comunista de Cuba or PCC) meets every five years to discuss the future political and economic priorities and vote on policies and new leadership. The Cuban government did not disclose what was on the Party’s formal agenda, but Congress unanimously approved five resolutions: (1) the Central Committee’s Report; (2) the draft concept of Cuba’s socialist economic and development model; (3) the proposed vision for the 2030 National Economic Development Plan; (4) an update on the 2011 Guidelines for Economic and Social Policies; and (5) the working objectives of the PCC, such as promoting greater participation, strengthening the country’s institutions, and maintaining the central control of the Party.

Below, ASG highlights some of the key themes discussed during the conference:

1. Progress to date: The PCC reviewed the economic reform process and the degree of implementation of the reforms introduced in 2011 under the Guidelines for the Economic and Social Policies of the Party and the Revolution (“2011 Guidelines” or “Lineamentos”). The 2011 Guidelines is an extensive document that outlines 313 reforms that the Party wanted to achieve within five years. President Castro stated that only 21 percent of these reforms were completed, but the majority of them are underway. Since President Raúl Castro assumed formal power in 2008, Cuba has been undergoing an economic and social reform process. The PCC has sought to incorporate some of the successful reforms Vietnam implemented in the 1980s and 1990s into its own Cuban economic model: gradually opening its socialist economy to market mechanisms, an emerging local private sector, and foreign investment, without abdicating political control. Despite efforts to open the economy through gradual, market-oriented reforms, Cuba continues to operate largely outside of the global system. The Cuban government has admitted that previous years of economic policies failed to generate necessary sustained growth.

2. 2030 National Economic Development Plans and new Guidelines for 2016-2021: The Party discussed and approved a concept of its vision for economic and social development by 2030. While the formal 2030 National Economic Development plan will not be announced this year (Party leadership is expecting to complete it by 2017), the vision will likely fall in line with the country’s overall direction of enabling some limited market-oriented reforms, attracting more foreign direct investment, and reforming state-owned enterprises. The government will also attempt to address major macroeconomic challenges, such as currency and exchange rate reforms and adjusting its balance of payments.

Because many of the objectives outlined in the 2011 Guidelines have not yet been accomplished, the Congress approved a resolution to update the Guidelines for 2016-2021, paving the way for its long-term economic and social vision. The new document, which will need to be approved by the National Assembly, is expected to include 286 guidelines, 44 of which are new and 193 of which are modified versions of previous reforms.

These new plans and vision statements will likely try to satisfy the different views of the orthodox and reform camps within the Communist Party, which could lead to the inclusion of seemingly contradictory statements. ASG anticipates that there will be nods in the direction of market-oriented reforms as well as assertions of the sanctity of the socialist model. For example, a few days before the Congress, the government announced policies that will allow cooperative businesses to purchase from government wholesale suppliers. Similarly, several resolutions approved during the Congress contain language promoting the principle of “collectivism” in business, suggesting a continued preference for cooperative business models over private enterprise. Nevertheless, the Guidelines are expected to demonstrate some evolution in the PCC leadership’s appreciation of the need to open and modernize the economy and attract higher levels of foreign investment.

3. Leadership transition: On April 18-19, delegates at the Party Congress elected a new Central Committee of the Communist Party and membership in the Politburo, the highest authority in the country. While some analysts had expected the major outcome of the Party Congress to be the beginning of major changes within the Cuban leadership, ultimately the makeup of Politburo did not change significantly. Raúl Castro and José Ramón Machado Ventura were reelected for new five-year terms as First and Second Party Secretaries, respectively. Twelve of the 14 members of the previous Politburo were reelected and five new members joined, raising the Politburo’s current membership to 17.  Minister of Transport Adel Yzquierdo Rodriguez was the only member not reelected.

Notably, President Castro announced his intention to create age limits for party leadership, though the change that will only go into effect in the next Congress. Specifically, new membership in the party leadership will be limited to those 60 and under, while those 70 and older will be expected to retire. The change underscores that Cuban leadership want to empower a younger generation to lead Cuba in the coming years. All five new members of the Politburo are civilians and well under the average age of the Politburo’s current membership, indicating that the transition to a younger generation of leaders who are not a part of the military is beginning (see graph in the following page for a list of the new faces of the Politburo).

However, many Cuba observers expected Machado Ventura, who is 85 years old and considered a hard-liner, to retire from his position as Second Secretary. His reelection, in combination with Fidel Castro’s surprise appearance and the general theme of continuity among Politburo members, underscore that the old guard of Cuba’s leaders are not yet comfortable relinquishing power, and signal that the nascent leadership transition will continue to occur very slowly.

Raúl Castro has said since 2013 that he plans to step down as President of the Councils of State and Ministers by 2018, allowing for a new successor to assume this position. However, his reelection as First Secretary through 2021 indicates that he will continue to wield significant power, even if he relinquishes his head of state position in 2018.

Most observers believe Miguel Díaz-Canel, one of the youngest members of the Politburo and current First Vice President of the Councils of State and Ministers, will succeed President Castro as head of state. Lacking the inherent authority of the Castros, Díaz-Canel and the new generation of leaders who were not heroes of the Revolution will face the formidable challenge of earning their own political legitimacy in the coming years. Companies engaging in Cuba should continue to monitor the political transition and be sensitive to upcoming changes in the medium term. 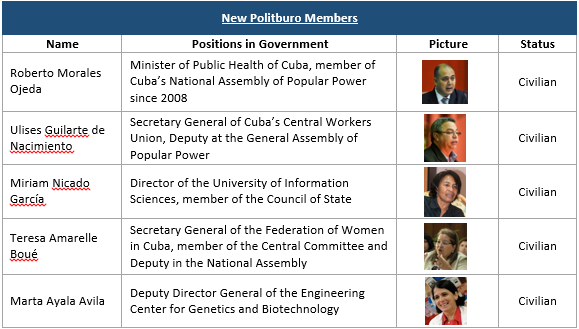 4. Criticism of the U.S.: While President Obama’s recent visit to Havana was celebrated in the United States, the Party Congress revealed a degree of backlash from conservative elements within the PCC against his repeated calls for democratic principles. Several leaders, including Foreign Minister Bruno Rodriguez, used the opportunity to criticize the visit as an “attack” on Cuba, stating that it was an attempt to “dazzle” the nascent private sector by making it an influential stakeholder in domestic affairs and an attempt to influence Cubans to abandon socialist ideals. These statements reveal ongoing concerns within Cuba’s leadership over the decision to seek rapprochement with the U.S. and the lingering tensions and mistrust in the bilateral relationship. However, it is ASG’s view that these statements were largely rhetorical, and do not portend a diversion from the ongoing process of rebuilding the bilateral relationship. Cuba’s leaders do not want to appear as being pressured by the U.S. to reform its economy or society. Any changes made during this Congress had to be seen as Cuba’s own doing.