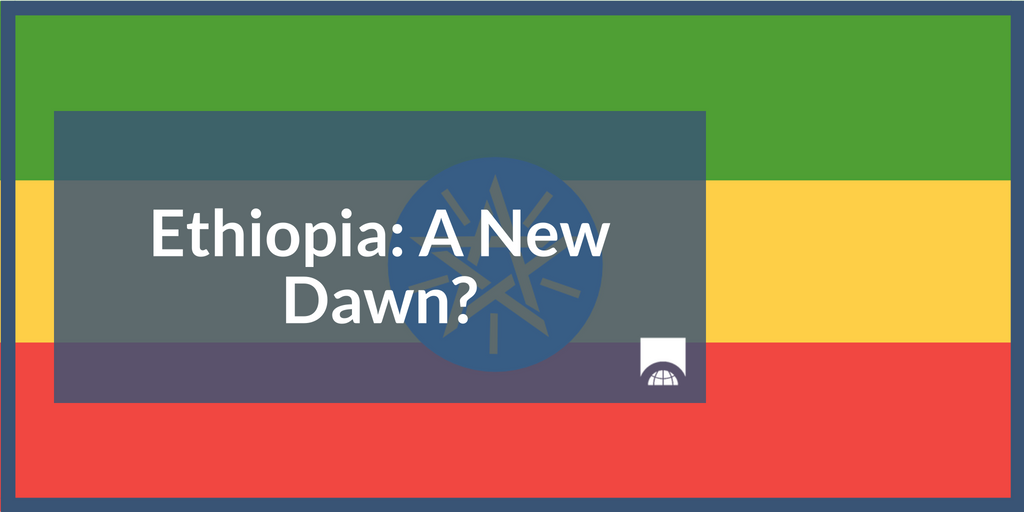 Situated in the Horn of Africa, Ethiopia is Africa’s second most populous country and home to more than 80 ethnic groups, each with its own distinct language, customs, and traditions. Ethiopia is an important player in Africa, exerting considerable political and economic influence, regionally and continent-wide. It is also in the middle of a political and economic transition with a new prime minister, Abiy Ahmed, who has been pursuing reforms at an unprecedented pace and scope for Ethiopia. His success will depend in large measure on his ability to build national consensus for reforms to open Ethiopia’s political and economic space.

A member of both the Intergovernmental Authority on Development (IGAD) and the African Union (AU), Ethiopia contributes significantly to Africa’s peacekeeping and peace building efforts. Ethiopia currently serves as a non-permanent member of the UN Security Council and has been commended for its economic performance and its poverty reduction efforts. An average GDP growth rate of about 10 percent over the last decade has reduced poverty rates in Ethiopia from about 40 percent in 2000 to 23.5 percent in 2016 and promoted the development of a middle class. Economic growth rates are expected to remain high, likely averaging about eight percent of GDP in future years, keeping Ethiopia among the ranks of the world’s fastest growing economies.

Since 1991, Ethiopia has been governed by the Ethiopian People’s Revolutionary Front (EPDRF), a ruling political coalition consisting of four ethnically and regionally based political parties: the Oromo Peoples’ Democratic Organization, the Amhara National Democratic Movement, the Southern Ethiopian People’s Movement, and the Tigrayan People’s Liberation Front. Since the 2012 death of Prime Minister Meles Zenawi, who governed Ethiopia for 17 years, two prime ministers have been in office: Hailemariam Desalegn (2012-2018) and Abiy Ahmed, who was sworn into office on April 2, 2018.

Meles was credited with transforming the economy and giving impetus to Ethiopia’s economic growth program by implementing the government’s first Economic and Transformation Plan (GTP I). Hailemariam continued with this program and developed the follow-on program, GTP II, which completed large infrastructure projects including industrial parks, dams, roads, and railways.

Despite taking steps towards opening the political space, Hailemariam was not able to curb the mounting protest movement that began in 2015. He resigned suddenly in February 2018, ostensibly to give space for a new leader to set about implementing additional political and economic reforms. The EPDRF’s April 2, 2018 announcement that Abiy Ahmed would be the successor was welcomed because for the first time, the party had chosen a member of the country’s largest ethnic group, the Oromo, to serve as the country’s head of state.

Despite Ethiopia’s impressive economic success, the government’s restrictive and centralized approach to governance, along with its poor human rights record and high youth unemployment levels led to large protests over the course of the past two years. In 2015, the Oromo and Amhara ethnic communities began taking to the streets to demand land reform, full political participation, and an end to human rights abuses in a country where the ruling coalition has historically been dominated by the Tigrayan ethnic group, which represents only six percent of the population.

The demonstrations, which were a major factor in Hailemariam’s eventual resignation, initially focused on the Oromia region. Protesters objected to the government’s urban expansion plan, formally known as the “Addis Ababa Integrated Master Plan,” which sought to expand the boundaries of the sprawling capital city into neighboring towns and villages located in Oromia, home to the country’s largest ethnic group. However, the instability soon spread to the Amhara region, home to Ethiopia’s second largest ethnic community.

As momentum grew, the protests became more generalized and represented a broader demand for inclusivity in the economic and political life of the country. The government’s forceful reaction – which included the imposition of a state of emergency, along with abuses committed by the security forces, and internet blackouts – was met with widespread criticism domestically and internationally. On April 10, the U.S. House of Representatives passed a resolution calling on the Ethiopian government to end the state of emergency and to demonstrate greater respect for human rights and inclusive governance. Remarkably, since Abiy’s inauguration, these protests have died down, and on June 5, the government lifted the latest state of emergency two months ahead of schedule.

Viewed as reform-minded, Abiy held various leadership roles prior to his appointment as prime minister. He previously served as a lieutenant colonel in the Ethiopian military, vice president of the Oromia region, and, most recently, as Minister of Science and Technology.

Despite inheriting an extremely fragile country, Ethiopia’s third prime minister is off to a promising start. Abiy’s April 2 inaugural address promoted messages of national reconciliation, justice, and accountability, including a commitment to crack down on corruption. His listening tours across the country to meet with Ethiopia’s various ethnic groups, youth, and opposition parties have been well received, as has his commitment to the private sector to address obstacles that frustrate business development and to open up Ethiopia’s economy.

Abiy appears to emphasize performance and accountability over party loyalty in his cabinet; recent dismissals of five high-level government officials and his emphasis on fighting corruption by going after government officials’ foreign bank accounts indicate that he is serious about change.

Abiy has also reached out to neighboring countries to promote partnership and regional cooperation. Early on he travelled to Djibouti, Sudan, and Kenya to encourage collaboration on infrastructure projects in the rail, road, water, power, and telecommunications sectors. His meetings in Sudan and Egypt resulted in agreement on measures to reduce regional tensions caused by the construction of the Grand Ethiopian Renaissance Dam on the Nile River. More recently Abiy’s government announced that it will accept the peace agreement with Eritrea, a historic move to calm a long-standing conflict.

The Ethiopian Approach to Growth

As he pursues Ethiopia’s continued economic transformation, the new prime minister will be guided by the second five-year Growth and Transformation Plan (GTP II) (2016-2020). This plan aims to transform Ethiopia’s subsistence agriculture-based economy to a manufacturing-led economy through the development of infrastructure and industrial parks. The goal is to grow the nation’s industrial sector by 20 percent, creating much needed jobs and helping Ethiopia achieve its goal of achieving middle-income status by 2025.

The industrial parks, which are sector-focused in areas such as textiles, pharmaceuticals, and agro-processing, are equipped with the full range of infrastructure services that new industries need to flourish. Broader infrastructure requirements are also being addressed. Ethiopia’s infrastructure spending, as a percentage of GDP, ranks as the highest in Africa. Buildings are springing up across Addis, but there is also a concerted effort underway to expand domestic and cross-border roads and rail lines. A series of hydropower projects promises to triple Ethiopia’s power generation capacity and cheapen energy costs. The government is betting that low land, labor, and energy costs will help Ethiopia become the continent’s favored investment and manufacturing destination.

Challenges Remain, But There is Impetus for Change

Abiy will need to address Ethiopia’s wanting business climate to achieve his goals. According to the 2017 World Bank’s Ease of Doing Business Report, Ethiopia ranked 159th out of 189 countries, a drop of 11 rankings from the previous year. The identified challenges include: issues with customs, cumbersome administrative procedures, the high cost of logistics, and difficulties in accessing credit and foreign exchange. These obstacles are especially difficult for Ethiopia’s small and medium-sized enterprises to overcome.

Past commitments to economic reform and liberalization produced little change as the state continued to exercise full control on the service sector, with state monopolies controlling the telecommunications and the financial markets. The state-owned Ethiopian Telecommunication Corporation (Ethio Telecom), the sole provider of communication services, including internet, mobile, and fixed line telephone service, is slow and unreliable. The inordinately high level of state interference in the economy along with challenges related to land acquisition, strict foreign exchange controls, high transaction costs, and weak institutions have been additional barriers to entry.

However, this month, Ethiopia’s new government delivered on Abiy’s commitment to improve the country’s business climate by announcing that it will begin implementing measures to privatize state-owned enterprises and to open up the telecommunications and airline sectors to private investment. This represents a dramatic shift from past practice in this highly centralized economy. While some interpret the unprecedented move towards privatization of these previously tightly controlled sectors as a necessary tactic to address the country’s severe foreign exchange shortage, it also represents the seriousness of Abiy’s reform efforts. Success in attracting new investment will depend on how well the privatization process unfolds, but also on the government’s ability to resolve its foreign exchange difficulties. International investors need to be able to repatriate funds.

Despite the economic challenges, foreign investment is evident in Ethiopia. Investors representing China, India, Turkey, Sudan, and the United States top the list of current FDI in Ethiopia. China leads the investor landscape both in terms of the number of projects and the financial capital it has been able to deliver. Since 2012, Chinese companies have invested over $572 million in 379 projects. Turkish investors are also showing interest with over three billion in capital committed in various sectors, as are African investors. The Dangote Group announced plans to double their investment levels which currently stands at about $500 million. The U.S private sector is present with Coca-Cola, Pepsi, GE, Oracle, IBM, SGI, Pizza Hut, and KFC. In addition, U.S. firms are also operating in the industrial parks with PVH Corp (Calvin Klein and Tommy Hilfiger), VF, and JC Penny being the most notable.

There is a good deal of optimism among Ethiopians as the new prime minister undertakes the difficult challenge to build a more open and democratic country. Abiy’s success will depend on his ability to unify the country around his vision and the speed with which he delivers well-executed results, including economic reforms that increase investment in Ethiopia.