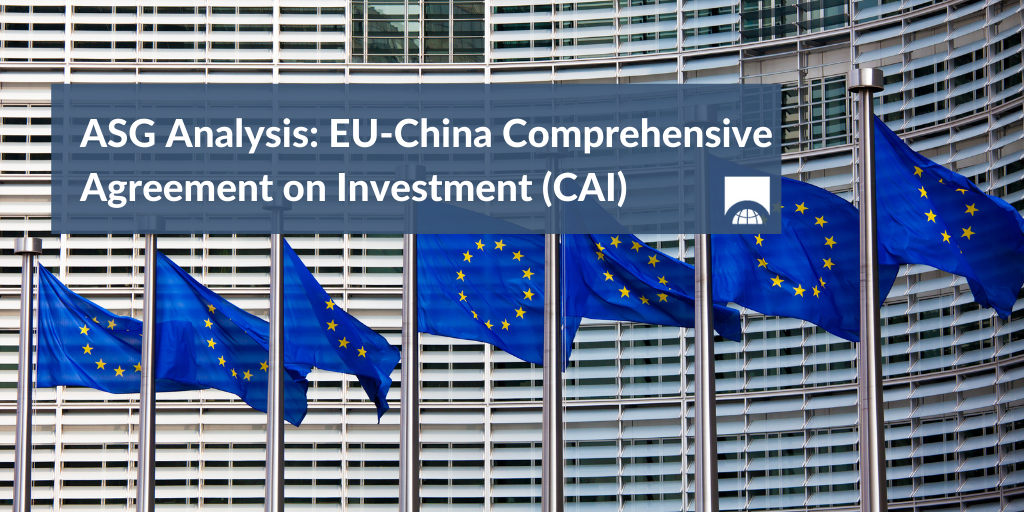 Timeline of the Agreement

The seven-year-long CAI negotiation process reached a controversial conclusion when an agreement was quickly finalized on December 30 after minimal discussion among EU member states and during a time when many were preoccupied with the coronavirus, Brexit, and the holidays. Germany – a major proponent of the agreement – was set to lose its presidency of the Council of the EU on January 1, likely explaining the rushed process. The agreement comes weeks before a significant political transition in the U.S. and as the incoming Biden administration continues to signal its plans to rebuild a transatlantic relationship focused on coordination to counter competition and threats emanating from China.

Despite the rushed negotiations, the CAI is unlikely to be ratified before 2022. The ratification process will be a telling sign of the current state of EU-China relations, in contrast to the closed-door negotiations which took place over the past month; Germany is already under fire from Belgium, Italy, Poland, and Spain for not legally binding China to higher human rights standards. The CAI ratification process will also be a harbinger of EU-US relations during the Biden administration.

The European Union is poised to make significant economic gains under the CAI; if ratified, the agreement would provide European investors greater market access to 1.4 billion Chinese consumers and a more level playing field in China. China has committed to opening to foreign investment in automotive, financial, health, cloud, computer, maritime transport, air transport, business, environmental, and construction services under the agreement.

The CAI seeks to make investment fairer by disciplining the behavior of Chinese state-owned enterprises (SOEs) and imposing transparency obligations on subsidies in the services sectors, filling an important gap in the World Trade Organization (WTO) rulebook. The agreement also clearly outlines rules against the forced transfer of technology and for equal access to standard setting.

Reciprocally, the EU would allow China greater access to its renewable energy sector, an area in which China already has a large footprint. The EU did not, however, approve a greater Chinese presence in its critical nuclear energy infrastructure, strategic shipping, security technology, and military industries.

China, in a potentially significant concession, agreed to bolster its labor and environmental standards. The CAI includes China’s commitment to implement the International Labor Organization’s eight fundamental Conventions, including on forced labor, and the Paris Agreement, with the goal of reaching net zero carbon emissions in Europe by 2050 and in China by 2060.

Despite these promises, critics of the CAI note China’s lackluster track record on labor protections and the absence of legally binding concessions to hold China accountable for its commitments; China will only be required to attempt to implement changes. For context, the Chinese government agreed to join the WTO’s Government Procurement Agreement “as soon as possible” when it joined the WTO in 2001 and is still not a signatory.

Parliament members hesitant about the CAI fall into two camps:

Given these concerns, the controversy over the agreement is not likely to dissipate quickly. Poland and the Netherlands have criticized the negotiation process while some member states are reportedly considering vetoes.

Impact on the Transatlantic Relationship

On December 21, Jake Sullivan, the National Security Advisor-designate for U.S. President-elect Joseph R. Biden, tweeted that “the Biden-Harris administration would welcome early consultations with our European partners on our common concerns about China’s economic practices.” While this request seems to have been sidelined by the German-led EU Council in its decision to push forward with the CAI, Sullivan has signaled that the Biden administration’s plans to rebuild trust and a working relationship with its European allies remain largely unchanged.

Sullivan also has suggested that the EU’s rush to finalize the CAI is because the Trump administration has damaged ties and alienated U.S. allies in its unilateral approach to China. In contrast, Sullivan has signaled that the incoming Biden administration will seek to build a new transatlantic alliance and approach towards China centered around deep shared concerns on trade, technology, human rights, and military aggression.

Unfortunately for the incoming administration, President Trump’s unilateral approach to foreign policy and the U.S. government’s difficulties dealing with the Covid-19 pandemic have severely undermined confidence in the U.S. as a partner on the global stage. While talk about the need for democratic countries to wage a “values battle” with China abounds, the signing of the CAI is a clear sign that European leaders in Germany and France do not have sufficient confidence that the U.S. will quickly emerge from its “America First” policy stance. Instead, according to European diplomats, the EU wanted “strategic autonomy” to make its own trade deal with China, akin to the Trump administration’s Phase One trade agreement, before starting to work with the new Biden administration on common concerns over China.

Despite the inopportune timing of the EU-China Comprehensive Agreement on Investment, ASG expects the EU and U.S to collaborate on their approach to China under the incoming Biden administration.