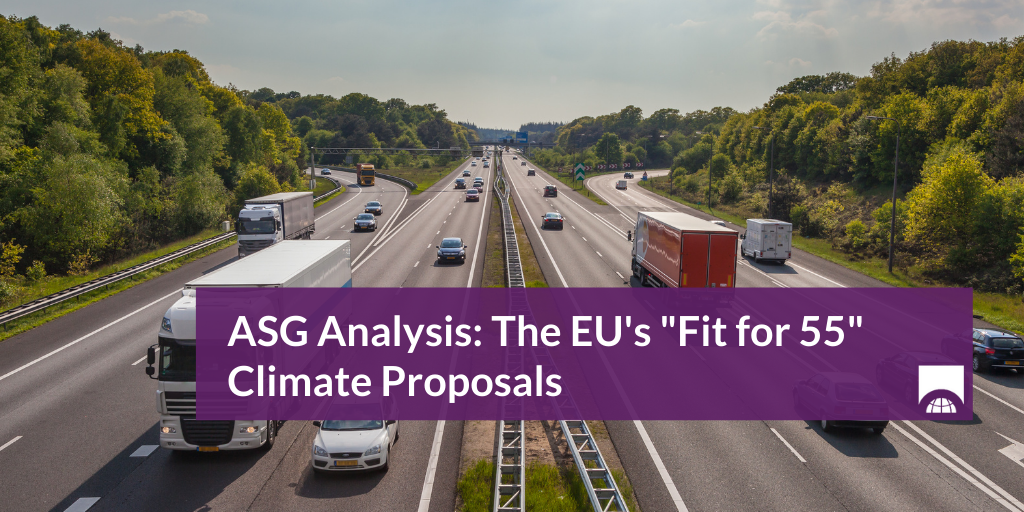 The European Commission announced its “Fit for 55” package of legislative proposals on July 14, setting off an expected two years of debate and negotiation between the 27 member states over final legal rules for achieving the bloc’s climate goals set out in the EU Green Deal, including its commitment to slash carbon emissions by 55 percent by 2035 and achieve carbon neutrality by 2050. The 12 proposals, among other things, aim to reduce the EU’s reliance on fossil fuels, expand the bloc’s renewable energy industry, accelerate the development of the electric vehicle market, and mandate new taxes for some of the heaviest polluting industries like aviation and shipping. The proposals all generally follow a core principle of making high pollution activities more expensive and climate-friendly options more attractive to both businesses and consumers with the hope that other countries will follow suit with similar legislation.

Approximately 25 percent of the EU’s total carbon emissions come from the transport industry, making it a key target of the Commission. The package lays out new carbon emission limits for combustion engine vehicles, requiring the average emissions of new vehicles to reduce 55 percent by 2030 and 100 percent by 2035, effectively setting an end date for the sale of new non-electric vehicles across member states. Some stakeholders, like France, believe this is too aggressive despite a parallel proposal to expand the bloc’s electric vehicle charging infrastructure. However, the EU is not acting on its own; numerous automakers around the world have already set their own combustion engine end dates (most between 2035 and 2040) based on quickly changing consumer demand.

One of the Commission’s most contentious proposals is the carbon border-adjustment mechanism (CBAM), which will target goods produced outside the EU with new tariffs to ensure that European companies are not disadvantaged by cheaper imports from countries with less stringent carbon rules. The CBAM initially affects only five carbon-intensive industries – aluminum, steel, cement, electricity, and fertilizer – and thus will have the greatest impact on least developed countries and countries like China and Brazil. However, numerous countries, including the United States, have shared their displeasure with the proposal, and the World Trade Organization has said it could be challenged through their processes if passed. Lobbying from both industry and environmental groups is expected to be strong, while support from member states, which have varying mixes of energy sources, will be hard won.

We also expect ongoing discussions between the EU and U.S., as well as other important trading partners, to be lively over the next two years; it is by no means a threat to the security of the transatlantic relationship, but the U.S. may retaliate should the tax become an outsized burden on a particular industry. Reaction so far has been relatively muted, but unpredictable variables in the U.S., such as the midterm elections in 2022, could swing the pendulum and see a more aggressive response to any trade impediments of the CBAM.

Concerns are similarly expected to arise from the general population if it becomes clear that the CBAM will lead to an increase in the cost of daily living. While environmental protection proposals are generally popular at a high level among the citizenry, they quickly lose support (and even spark protests, à la the Yellow Vest protests in France) if they begin to impact personal variables, such as the cost of necessary goods, petrol, or the monthly heating bill. The EU will have to balance its ambitious, and necessary, climate aspirations with its duty to satisfy the needs of member states and stave off any increasing Euro-skepticism.

Some remain concerned that the EU’s aggressive targets could have outsized impact on the region’s lowest-income member states, particularly those in Central Europe which have historically been more reliant on fossil fuels than other nations. We also expect debate within the European Council to be contentious at times as the Frugal Four are likely to balk at the price tag of the package and other member states worry about targeted impact on some of their most economically important sectors. The Commission is hoping to address these concerns, in part, by building in support for a gradual but sustained transition for industry, as well as by earmarking free carbon credits for 10 years and millions of euros in financial assistance. This is also reflected in the proposed Social Climate Fund, which will access approximately €72 billion from the expanded carbon emissions market between 2025-2032 to offset the cost of modernizing citizens’ homes, including more efficient heating and cooling systems, sustainable mobility, and investment in clean energy. Still, we expect continued debate about how much effort is being asked of citizens versus private companies and an ongoing commitment to create a fair economic transition.