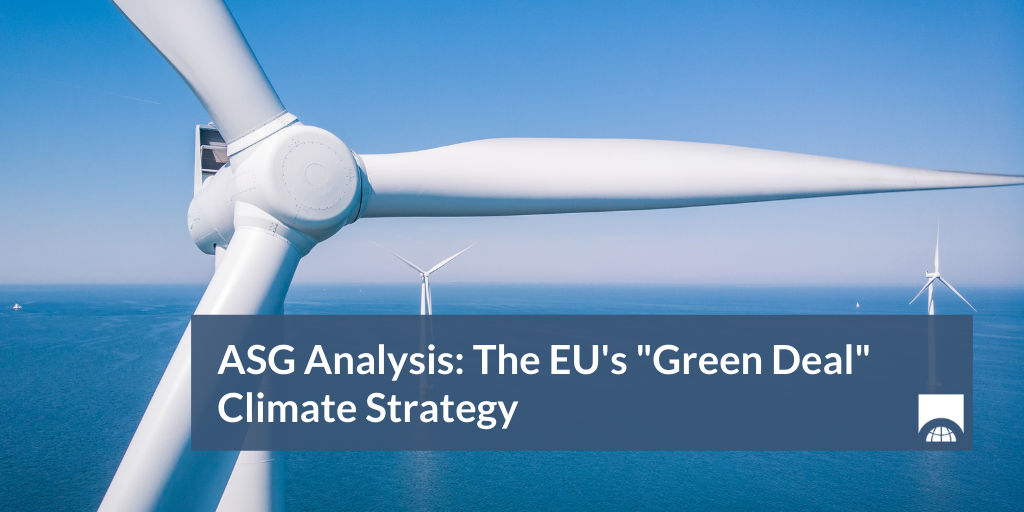 The European Green Deal is a landmark €1 trillion plan that will serve as the overarching framework for climate and sustainability policy in the European Union until at least 2024, when the current European Commission’s term ends. The plan is wide-ranging and includes goals and funding mechanisms for clean energy, sustainable industry, building and renovation, agriculture, pollution, sustainable mobility, and biodiversity. The EU’s overall goal is to reach net-zero carbon emissions by 2050, with a 55 percent reduction by 2030. About one-half of the long-term funding for the Green Deal will be a direct component of the EU’s budget, including programs that already contribute to green projects, such as Horizon Europe – the scientific and technological investment and research program – as well as the Regional Development Fund, the Cohesion Fund, and the Life program.

The plan includes a complete end to subsidies for fossil-fuel companies (which currently stand at approximately €47.7 billion per year), extends emissions trading to the maritime sector, and reduces free emissions trading allowances for airlines. The Commission wants at least one million electric vehicle charging stations installed across the EU by 2025 to complement the at least 30 million electric vehicles it plans to put on the road.

A key piece of Europe’s renewable energy strategy, both at the EU and member state levels, is the use of hydrogen as a gap measure to reach aggressive carbon reduction goals. At the core of that plan, however, is a dilemma: most hydrogen manufacturing in the EU currently uses electricity generated by fossil fuels, including coal and natural gas. The EU aims to to increase the overall share of renewably generated hydrogen, and then to boost hydrogen’s share in the final EU energy mix to 14 percent by 2050, from less than 2 percent today. Cumulative investments in renewable hydrogen could range from €180 billion to €470 billion by 2050, and in the range of €3 billion to €18 billion for low-carbon fossil-fuel-based hydrogen. The importance of hydrogen to reaching emissions targets is similarly reflected in member state plans, such as Germany’s National Hydrogen Strategy.

Discussions are ongoing regarding a Carbon Border Adjustment Mechanism (CBAM), which is a carbon tariff on imports from countries with weaker emissions standards. The EU is not likely to implement a CBAM this year due to numerous technical, political, and diplomatic barriers. But the European Commission remains committed to the idea as a way of assuring European producers that the Green Deal will not destroy their ability to compete in their home market.

Along with EU and member state budget commitments, the Green Deal will receive funding from InvestEU, a major economic financing initiative from the European Investment Bank and the European Commission that aims to mobilize private funds for strategic initiatives with an EU budget guarantee. The scheme will leverage approximately €279 billion through 2030. Over the next ten years, another €143 billion will come from the Just Transition Mechanism, an EU initiative to ensure the climate transition is equitable. Finally, the EU Emissions Trading System, which has been in place since 2005, will provide approximately €25 billion to help meet the goals of the Green Deal.

The European Parliament and member state negotiators reached a legislative agreement on the standard-setting and regulatory aspects of the Green Deal in April 2021, titled the European Climate Law. The legislation is still pending formal approval from parliament and national governments, but is likely to be implemented in the second half of the year.

The EU aims to kickstart short-term pandemic recovery with a stimulus package – called Next Generation EU – tied in to a recently agreed-to seven-year budget that makes €1.8 trillion available to rebuild Europe’s economy. Like many governments around the world, the EU views fallout from the pandemic as an opportunity to move forward projects and policies once considered too dramatic for mainstream approval; both Next Generation EU and the budget include significant investments in green infrastructure construction, preparedness and resilience programs, digital transition initiatives, and research and development of clean energy sources. The programs will be funded by EU grants and loans as well as through individual member state programs.

Approximately 30 percent of the recovery package will be financed by green bonds, which are increasingly seen as a key to accelerating green energy and infrastructure projects. The EU has announced its intention to create an EU-wide green bond standard that would ensure access to information and secure financing, allowing investors to more easily identify sustainable investments and verify their credibility. The core components of the standard are expected to be a formalized definition of green projects, a framework that standardizes the legal definition of green bonds, mandatory verification and reporting by an external auditor, and mandatory reporting on allocation and impact of the finances. Green bond investors are expected to align on the new taxonomy by January 2022, while bond issuers are expected align by January 2023. ASG expects this concerted effort to boost the green bond industry globally, potentially opening up new avenues for sustainable investing and green infrastructure projects in both developed and developing countries.

The EU’s ongoing push for aggressive climate standards reflects its technical policy expertise coupled with its desire to set global standards that others will emulate. The EU hopes that just as countries have adopted privacy standards based on the EU’s General Data Protection Regulation (GDPR), they will use the EU’s climate standards as a framework for their own. The global visibility of GDPR, with websites requiring consent for cookie usage, for example, meant that other countries didn’t necessarily need their own legislation in order for local companies to implement data protection measures. Through a carbon border tax and other mechanisms, the Green Deal seeks to replicate this effect and set standards for greenhouse gas reductions and clean energy that will apply well beyond the EU.

However, EU officials will need to seek cooperation from both the European Parliament and the Council of the EU. Tensions between the three institutions will influence the shape and scope of European climate policy; the European Parliament is much more ambitious on climate but often lacks the power to push back against the Commission and Council, while the Council of the EU, comprised of member state ministers, tends to be more hesitant and needs to consider the positions of all member states, often reaching messy compromises to ensure consensus. The Commission will seek to find a middle ground between the two.