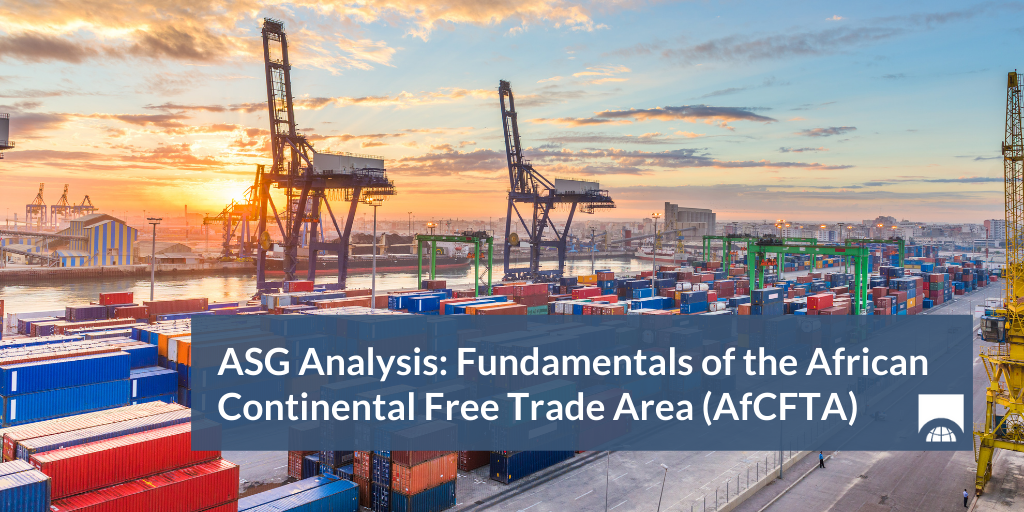 This ASG Analysis begins a three-part series on the African Continental Free Trade Area (AfCFTA). It focuses on the agreement’s status, purpose, and early implications for investors, while later installments will delve deeper into the specifics of a single market, foreign direct investment, and opportunities in a post-Covid Africa with a functioning AfCFTA. The second piece focuses on the ways in which the success of the AfCFTA may be complicated or challenged. The third piece focuses on the agreement's future and potential. The series is part of a broader lineup of ASG Analyses examining “game-changing” developments across Africa that will shape the continent’s political and economic future.

The AfCFTA at a glance

The African Continental Free Trade Area (AfCFTA) is a major part of the African Union’s (AU) Agenda 2063, which is a 50-year plan to attain inclusive and sustainable development by 2063. The AfCFTA agreement aims to boost intra-African trade and promote industrial development by creating a single market that allows for the free movement of goods, services, and people. While the AfCFTA was established in 2017, the paperwork creating the free trade area was signed in 2018. It eventually entered into force on May 30, 2019, 30 days after the required minimum of 22 states had deposited their articles of ratification with the AU Chairperson. As of May 7, 2021, 36 out of the 54 countries that have signed on to the AfCFTA have deposited their instruments of ratification; these 36 are currently trading under the agreement. 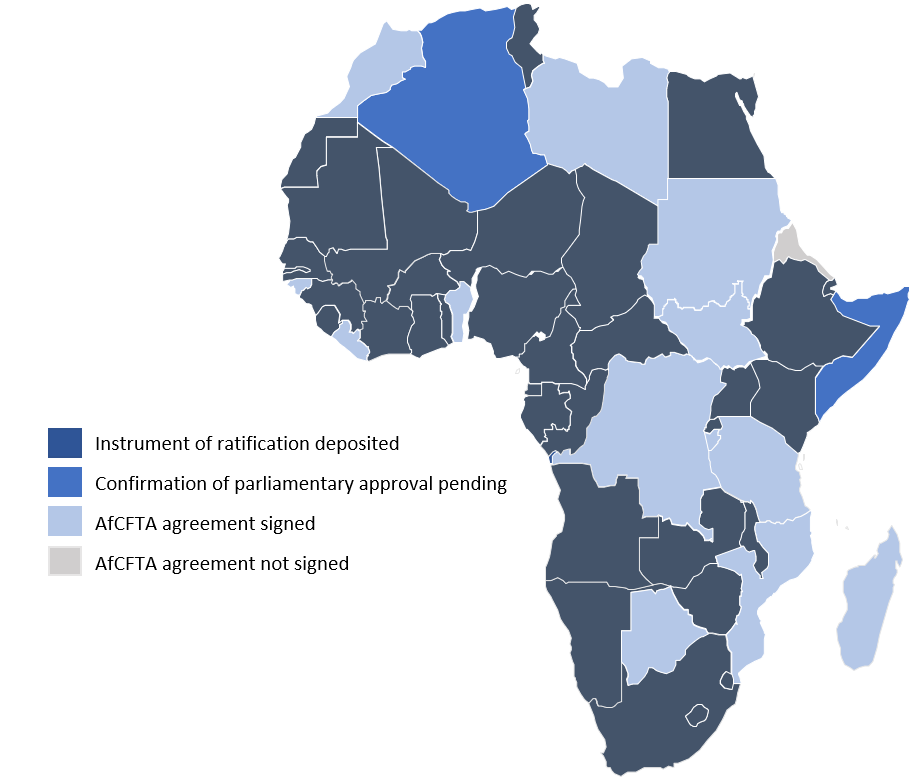 The AfCFTA covers a vast geography, making it the largest free trade area in the world and the second-largest trading agreement in terms of population after the Asia-Pacific’s Regional Comprehensive Economic Partnership (RCEP). It connects nations with a combined GDP of $3.4 trillion and a population of over 1.3 billion people. Often seen as a region with unfulfilled economic potential, the African continent seeks to use the agreement to transform itself into a global powerhouse. Compared to other regions of the world, Africa has the lowest level of intra-regional exports at 16.6 percent as of 2017. Eliminating trade barriers could increase intra-African trade by 52.3 percent according to the United Nations Economic Commission for Africa (UNECA).

Following a number of delays due to the Covid-19 pandemic, actual trading under the AfCFTA began on January 1, 2021. The catastrophic economic effects of the pandemic across Africa have served as a catalyst for previously unwilling nations to ratify the agreement. Some countries initially hesitated because they feared influxes of migrants, intensified competition for domestic products, and higher crime rates, but since the start of the pandemic eight countries (including Africa’s largest economy, Nigeria) have deposited their articles of ratification with the AU Chairperson and two more are pending.

Nuts and bolts of the AfCFTA

As part of the agreement, African countries have agreed to eliminate 90 percent of all tariff barriers. To level the playing field, countries that have been designated as Least Developed Countries (LDCs) by the UN are expected to liberalize tariffs over 10 years while others are expected to do so over five years. An additional 7 percent of tariffs on sensitive products will be eliminated over 13 years for LDCs and 10 years for other countries. All countries will be allowed to maintain 3 percent of tariff lines that account for up to 10 percent of intra-African trade. Non-tariff barriers such as import bans, export subsidies, and restrictive licenses will be reduced by 50 percent on a most favored nation basis (i.e. countries will provide their trading partners with the most favorable terms possible).

The AfCFTA will be negotiated and implemented in three phases: Phase 1 covers the trading of goods and services, Phase 2 addresses investment, competition policy, and intellectual property rights, and Phase 3 negotiations will focus on e-commerce after a year of capacity-building. Even though trading kicked off in January 2021 under Phase 1, negotiations are not yet complete and countries are trading under an interim arrangement. Remaining Phase 1 agenda items include tariff and rules of origin negotiations. So far 41 countries have submitted their schedules of tariff concessions and have agreed on approximately 81 percent of tariff lines. The AU projects that Phase 1 negotiations will end in June 2021 and Phase 2 and 3 will be finalized by December 2021. However, analysts expect more conservative timelines as countries’ attention is diverted by additional waves of Covid-19 cases, low vaccination rates, and domestic security issues.

Even as the agreement has reached key milestones – trading has started and Phase 1 is being finalized – analysts point to Phase 2 as critical, especially for foreign direct investment (FDI). The decisions made during these negotiations will be crucial to ensure the effectiveness of the AfCFTA and boost investors’ interest and confidence in African markets. Protections for intellectual property (IP) rights and an enforcement mechanism for IP violations would enhance collaboration and allow investors to confidently share IP and best practices with African countries. This type of knowledge-sharing is critical to the development of industries like manufacturing, enabling African markets to align with international standards and become more competitive on the global stage. We also expect Phase 2 to facilitate the continent's ability to integrate further into global supply chains, especially as companies look to diversify their supply chains in the wake of the pandemic.

While the AfCFTA is touted as an important step towards cross-continental cooperation, analysts point to negotiations regarding competition policy as important barometers of African countries’ commitment to an open, single market. Should the outcome of talks reaffirm a free-market approach, investors will benefit from the erosion of protectionist policies that have pervaded many African markets. A key indicator to watch is the possible establishment of a competition commission, which is likely to be discussed during Phase 2 negotiations. This commission would act as an enforcer and provide an effective dispute resolution platform for trading countries on competition-related issues, which the current Dispute Settlement Body does not cover. It would provide a strong incentive for trading countries to engage in fair practices and contribute to an even playing field for foreign investors.

The implementation of the AfCFTA presents an opportunity for evolution in Africa’s relationships with its major external partners, and the AfCFTA leadership has committed that the agreement will serve as a catalyst to boost relationships with outside stakeholders. By overcoming market fragmentation, the agreement will provide opportunities for larger trade deals to emerge with other regions. There are also encouraging signs that major AfCFTA policies will take a broad range of viewpoints into consideration, even as the agreement remains very much an Africa-driven initiative. Since the agreement’s launch, AfCFTA Secretary General Wamkele Mene has ramped up high-level meetings with external stakeholders like the UN and EU Commission. On March 29, he signed a Memorandum of Understanding with the UN Development Program for support in strengthening the capacities of domestic customs authorities, boosting digitization of intra-African trade, and preparing Small and Medium size Enterprises (SMEs) for trade. He has also expanded working sessions with the continent’s trading partners such as the U.S., EU, and China, opening the door for consultation and input as the AfCFTA takes shape. Opportunities exist for foreign investors and partners to offer their input as well.