ASG Analysis: Geopolitical Trends to Watch in MENA in 2020 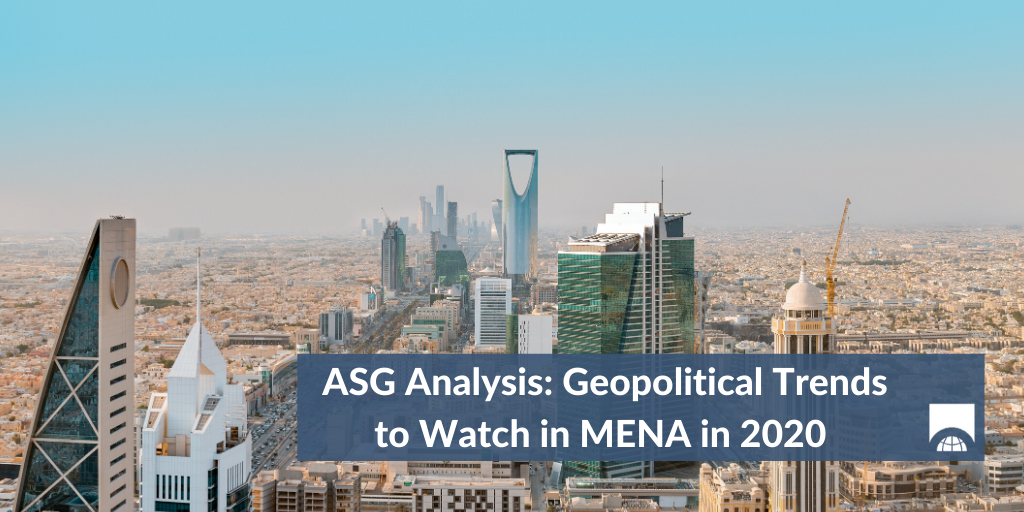 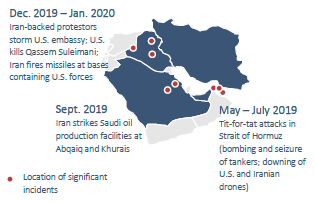 Last year witnessed the significant escalation of regional tensions with Iran. Tit-for-tat attacks over the summer (including the bombing of ships in the Strait of Hormuz and the downing of U.S. and Iranian drones) culminated in Iran’s September strike on Saudi oil production facilities at Abqaiq and Khurais, which raised fears of armed conflict in the wider Gulf region. Tensions dissipated somewhat at the end of 2019 in the absence of major new attacks but reignited in the new year following the January 3 killing of Qassim Suleimani, commander of Iran’s IRGC Quds force. This brought the United States and Iran closer to a direct military conflict than they had been in 40 years.

The Iranian response, which involved launching more than 20 short-range ballistic missiles at two bases in Iraq where U.S. forces were stationed, appeared to be designed to minimize casualties and give President Trump a way to avoid escalation. Trump responded by calling for additional sanctions, but he did not propose a military response against Iran, instead suggesting that the U.S. was open to making a deal. Tehran’s later admission that it accidentally shot down a Ukrainian passenger airliner and the government’s attempted cover-up triggered days of protests in Iran and demands for the resignation of senior government officials.

The months ahead will likely see continued tensions and the potential for further attacks, with the risk of a significant escalation looming in the background. Iran has already taken several steps away from compliance with the nuclear deal, and senior officials have even threatened withdrawl from the Non-Proliferation Treaty (NPT). On Februray 21, Iran holds parliamentary elections, in which hardliners are expected to do well, especially in light of the disqualification of many moderate and reformist candidates. For these reasons, negotiations toward a "new Iran deal" appear unlikely, though the possibility should not be discounted entirely.

We see three possible scenarios for the year ahead:

Although both Iran and the United States have a clear interest in avoiding war, major impediments make a new comprehensive deal unlikely in the short term. 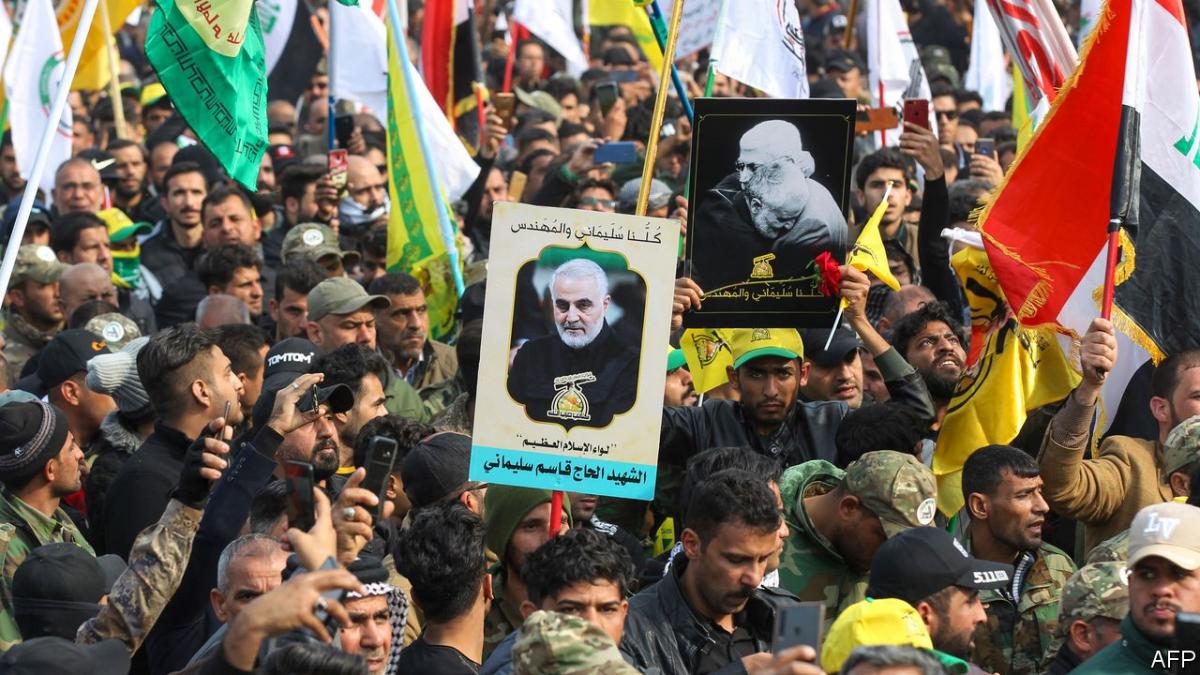 Last year saw the outbreak of mass anti-government protests in several countries in the region. In February 2019, longtime Algerian President Abdulaziz Bouteflika announced that he would seek a fifth term in office. This triggered mass protests across Algeria, which resulted in Bouteflika’s resignation in April. His departure came soon after news that the military would no longer support his leadership and was throwing its weight behind the protestors’ demands for a change in government. In Sudan, months of street protests culminated in a military-led coup d'état in April that deposed President Omar Al-Bashir after thirty years in power marked by oppression, economic mismanagement, and human rights abuses.

In the fall, mass protest movements gathered momentum in Lebanon and Iraq, fueled by long-brewing anger over corruption and unemployment and frustration with the political and economic status quo. In Lebanon, the protests were sparked by the announcement of several new taxes, including one on WhatsApp use, but quickly took the shape of a broader rebuke of the country’s political elites and its confessional political system, in which political power is divided among the different religious groups. In Iraq, protesters expressed similar anger with the economic situation and political elites, but also notably expressed anti-Iranian sentiments. In late October, Lebanese Prime Minister Saad Hariri and Iraqi Prime Minister Adel Abdul-Mahdi both resigned, though Abdul-Mahdi stayed on in a caretaker role until the Iraqi president appointed a consensus candidate to replace him last week.

[I]t will be important to see … whether the unrest remains limited to these countries, or, as was the case with the Arab Spring, fuels wider instability across the region, especially in the Arab Gulf states.

Unrest continues in all four countries. The military remains in control in Algeria, but its arrests of Bouteflika’s brother and other members of his inner circle have failed to pacify protestors, who demand more radical democratic change and free elections. The transitional power-sharing arrangement between the military and civilian leadership in Sudan remains fragile, and the country continues to see sporadic violence. A new government led by Prime Minister Hassan Diab has come to power in Lebanon, but it is already broadly unpopular and faces an uncertain future, despite surviving a parliamentary no-confidence vote this week. In Iraq, mass anti-U.S. protests sparked by the killing of General Suleimani have tapered off since Shia cleric Moqtada Al Sadr called on his followers to clear the streets in a show of support for the new prime minister, Mohammed Allawi. However, Allawi has little political leverage in parliament and faces opposition from anti-government protestors who believe he represents the political establishment.

The size of the protests over the past year, their stated democratic ambitions, and their initial success in toppling unpopular leaders bear striking similarity to the 2011-12 Arab Spring. In the year ahead, we will be watching how Sudan, Algeria, Lebanon, and Iraq navigate this period of political tension, and whether the unrest remains limited to these countries, or, as was the case with the Arab Spring, fuels wider instability across the region including in the Arab Gulf states.

Below are four scenarios that could unfold this year:

Gulf economies had a difficult year in 2019. With the exception of Bahrain and Qatar, which saw modestly improved growth, the GCC economies all slowed relative to 2018. Overall GDP growth dropped from 2.0% to 0.8%, the second-weakest aggregate growth since the global financial crisis. While the UAE economy slowed only negligibly from 1.7% to 1.6% growth, Kuwait saw its economic growth fall by half from 1.2% to 0.6%, and Saudi Arabia experienced an even steeper slowdown from 2.4% to 0.2% growth. The Omani economy ground to a halt, registering no growth in 2019 after growing 1.8% the year before. The slowdown tracked low oil prices, which cut into economic growth and government spending across the region, and a slowing global economy.

Despite all setting ambitious long-term strategies for economic diversification, the GCC countries remain highly dependent on oil. The mixed track record of Saudi Vision 2030 is emblematic of the challenges Gulf countries face as they seek to transition away from oil. The Saudi government has poured tens of billions of dollars into health, education, infrastructure, and tourism, unveiled flagship megaprojects designed to attract foreign visitors and investors, streamlined regulations to make the country more competitive, and imposed a quota-based system to encourage hiring of Saudi nationals. The Kingdom has largely succeeded in improving its investment climate, recording a 54% year-on-year increase last year in the number of new foreign investment licenses. In Q3 2019, Saudi Arabia also had its strongest non-oil sector growth since 2014. However, broader efforts to reduce dependence on oil exports for government revenue and on government hiring for employment have fallen short of targets. The Kingdom still depends on oil for more than 85% of government revenue, and although the official unemployment rate among Saudi nationals dropped from 12.9% in mid-2019 to 12.0% in Q3 2019, absolute private sector employment of Saudi nationals actually dropped.

We will continue to monitor whether Saudi Arabia and other Gulf countries press ahead with economic diversification efforts and fiscal tightening, or take advantage of stabilizing oil prices to relax fiscal and economic policy.

The IMF expects Gulf economies to recover this year on the back of expected stabilization in oil prices and global economic growth. Over the coming year, we will be watching whether the geopolitical risks that have roiled international markets in recent years—especially trade tensions with China—level off as expected. A flare-up in trade tensions, increase in uncertainty over Brexit, or re-escalation of hostilities with Iran could all increase volatility in global oil and financial markets. Regionally, we will continue to monitor whether Saudi Arabia and other Gulf countries press ahead with economic diversification efforts and fiscal tightening, or take advantage of stabilizing oil prices to relax fiscal and economic policy. Looser fiscal policy could stimulate short-term growth but at the risk of the longer-term fiscal health of GCC countries.

We see three scenarios for the year ahead: