ASG Analysis: Implications of COVID-19 for Iran and Region

Iran is struggling to cope with an escalating COVID-19 outbreak. The number of new infections continues to rise. As of publication, Iran had nearly 1,500 deaths from almost 20,000 confirmed cases, the third-highest figures after China and Italy. However, official numbers are unreliable and likely significantly undercount the scale of the outbreak. According to the World Health Organization (WHO), the real number of cases could be at least five times higher than the official toll. The current mortality rate of COVID-19 in Iran (around 6%) is more than double the global average and nearly ten times higher than the rate in South Korea, suggesting that only the most serious cases are being tested in Iran.

There are indications that COVID-19 has already spread widely in rural areas where people have more limited access to testing and medical care. Last week, health authorities in the relatively remote northeastern province of Golestan declared that hospitals were full. The outbreak has also struck senior levels of government. The vice president and two cabinet members—as well as several senior members of the military and clerical establishments and at least 24 members (roughly 10%) of parliament—have tested positive for the virus. On March 16, a member of the Assembly of Experts, which is responsible for selecting the next supreme leader, became the latest senior official to die of the virus. Other officials who have died in recent weeks include a senior advisor to Supreme Leader Khamenei and two MPs.

[S]ome recent reports suggest that officials have been reluctant to take steps that would further weaken the economy or cause panic. Iran has also suffered from a lack of clear leadership in recent weeks.

After it was criticized for downplaying the extent of the outbreak and not responding aggressively enough when the first cases were reported, the Iranian government has taken important steps to control the spread of the virus. It has established checkpoints to limit travel between major cities, cancelled public gatherings, closed schools and religious sites, quarantined heavily affected areas, mobilized tens of thousands of teams to conduct door-to-door screenings, and even deployed drones to disinfect the streets.

Nonetheless, some recent reports suggest that officials have been reluctant to take steps that would further weaken the economy or cause panic. Iran has also suffered from a lack of clear leadership in recent weeks. On March 12, Khamenei issued an order tasking the commander-in-chief of the Joint Armed Forces with overseeing outbreak response. This triggered infighting between Iran’s civilian and military leadership about what steps should be taken to contain the virus and whether the country could cope with the resulting economic and bureaucratic pressures. The fight spilled into the public as President Hassan Rouhani and military leaders contradicted each other about whether and how cities would be locked down and business would be shuttered.

According to recent reports, many in Iran are ignoring government warnings about exposure, and bazaars and shops remain busy, especially as Iranians prepare to celebrate Persian New Year (Norwuz) on March 20. The government has urged people not to travel during the holiday. After delaying for weeks, Khamenei finally closed four important religious shrines in Qom, Mashhad, and Tehran. But on March 16, the day of the closures, worshippers attempted to break into the sites. Meanwhile, Iranian health authorities continue to struggle to cope with the number of COVID-19 patients. There are reports of long lines at hospitals and shortages of masks, gloves, gowns, and other protective equipment.

Iran is already on shaky economic and political footing

The COVID-19 outbreak comes at a difficult moment for Iran both economically and politically. Since the U.S. withdrew from the Joint Comprehensive Plan of Action (JCPOA), or Iran nuclear deal, in 2018 and imposed a “maximum pressure” campaign of economic sanctions, the Iranian economy has fallen into a deep recession, contracting 4.8% in 2018 and a further 9.5% in 2019. Oil exports, which contributed a majority of government revenue, have fallen from a peak of 2.5 million barrels per day (bpd) in early 2018 to an average of just 260,000 bpd late last year. 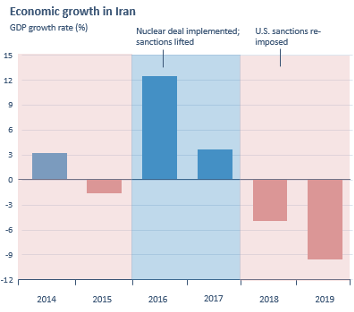 The near zeroing-out of Iranian oil exports—coupled with secondary sanctions that penalize foreign companies or individuals that do business with sanctioned Iranian entities—has isolated Iran from international trade and financial networks and led to runaway inflation, unemployment, and shortages of food and medicine. The Iranian rial has lost more than half its value against the U.S. dollar since sanctions were re-imposed, and official unemployment has surpassed 16% overall and nearly 30% among young Iranians (though real unemployment is likely significantly higher).

The declining quality of life for Iranians has intensified public dissatisfaction with the government and spurred calls for political reform. In December, Iran experienced its worst political unrest since the 2009 Green Movement and possibly since the Iranian Revolution 40 years ago. Mass protests that began in response to a 50% hike in fuel prices evolved into larger rebuke of the political status quo. The Iranian government responded with extreme force, killing several hundred protestors and arresting a further 7,000.

The harsh crack-down succeeded in quashing the protests, and the regime benefited from a temporary surge in patriotism following the U.S. killing of General Qassem Suleimani in early January, but this reprieve was short-lived. Tehran’s subsequent admission that it had accidentally shot down a Ukrainian passenger airliner and the government’s attempted cover-up triggered days of protests in Iran and demands for the resignation of senior government officials.

The outbreak will deepen cracks in the Iranian regime

Against this backdrop of economic and political instability, the COVID-19 outbreak presents a crisis for Iranian leadership. Though the full economic impact of the outbreak will not be known for some time, it will almost certainly push Iran further into recession. The virus has forced the government to shut down travel to China, by far the country’s largest trading partner and one of its few remaining economic lifelines. In a sign of the country’s growing economic distress, Iran last week requested $5 billion in emergency funding from the IMF.

Domestic travel restrictions and quarantine measures will have a significant impact on the already-struggling private sector. Since the U.S. re-imposed sanctions, Iran has had some success in moving to a so-called “resistance” economy. The restriction of imports and weakening of the Iranian currency have had the side-effect of increasing demand for locally produced items. Production of consumer goods such as home appliances, housewares, and jewelry had reportedly been on the rise in recent months. COVID-19 is likely to reverse these gains, as isolation measures bring the service sector to a halt and the expected decline in consumer sentiment saps demand for consumer goods.

The simultaneous crash in global oil prices deals another blow to the Iranian economy. The crash was sparked by the failure of Saudi Arabia and Russia to agree to a deal on future oil output earlier this month, triggering a price war, but also reflected underlying weakness in oil demand due to concerns over the impact of COVID-19 on the global economy (see our previous analysis on the price war). Brent crude has been trading between $30-45 per barrel in recent days, down from roughly $65 per barrel in January. Since last spring, when the U.S. ended waivers that had allowed a handful of countries, including China, India, Turkey, Japan, and South Korea, to purchase Iranian oil, Iran has been forced to sell on the black market at cut rates. Cheaper oil will make Iranian oil less competitive and dry up its sales on the black market, or force Iran to discount prices more, both of which would cut further into Iranian state finances at a time the government is most in need of resources to respond to the outbreak and shore up the economy.

The … outbreak poses a growing threat to the political stability of the country. Several members of the supreme leader’s inner circle … have contracted the virus, which raises the possibility that Khamenei himself could become infected.

The COVID-19 outbreak also poses a growing threat to the political stability of the country. Several members of the supreme leader’s inner circle and the broader clerical establishment have contracted the virus, which raises the possibility that Khamenei himself could become infected. Although the regime has reportedly been preparing for his death for some time, it would trigger political succession at a moment of extreme political and economic uncertainty.

While public anger at the regime is likely to grow, state repression has left opposition with little ability to organize. Instead, the government has sought to redirect public anger towards various external enemies. President Hassan Rouhani has said that Iran’s fight against the coronavirus was being “severely hampered” by U.S. sanctions. Moreover, quarantine measures and fear of contracting the virus will deter many from public gatherings, reducing the near-term risk that large anti-government protests will reemerge. Even if protests do reemerge, the government will have justification to shut them down by force in the name of public health. In the longer term, however, the government’s initially slow response to the outbreak and lack of transparency will likely further erode its credibility and deepen anti-government sentiment.

As the regime struggles to cope with the outbreak at home and faces an increasingly grim economic and political outlook, it may have an incentive to take a more aggressive posture regionally, raising the risk of confrontation with the U.S. Some early signs indicate that Iran is already adopting a more aggressive stance. On March 11, U.S. officials accused Iran-backed Shia militia Kata’ib Hezbollah of carrying out a rocket attack on Iraq’s Camp Taji military base that killed two U.S. troops and one British service member. The U.S. responded the following day with airstrikes on five Kata’ib Hezbollah sites that officials claimed the group was using to store weapons.

If tensions with Washington increase at the same time its domestic political footing weakens, the Iranian government may also have an incentive to accelerate its pursuit of a nuclear weapon. Iran began to incrementally increase its nuclear activities in July 2019 and, after General Suleimani’s killing in January, formally ended all its commitments under the JCPOA. On March 9, International Atomic Energy Agency (IAEA) Director General Rafael Grossi told his Board of Governors that the IAEA had “identified a number of questions related to possible undeclared nuclear material and nuclear-related activities at three locations that have not been declared by Iran.” Grossi reported that Iran has not provided access to two of these locations and has “not engaged in substantive discussions to clarify the Agency’s questions.” This has hampered the IAEA’s ability “to provide credible assurance of the absence of undeclared nuclear material and activities in Iran.” Estimates vary as to how long it would take for Iran to produce enough weapons-grade material and develop a nuclear warhead and missile capabilities, but Iran does appear to have a viable path toward a bomb. It could potentially accelerate its activities if it feels that a bomb is necessary to deter a U.S. strike on its leadership or shore up its domestic position.

The COVID-19 outbreak also has the potential to exacerbate tensions between Iran and its Arab Gulf neighbors. Iran appears to have been the main source of COVID-19’s initial spread to the rest of the Gulf, although most new cases can be attributed to community transmission. Iran’s Gulf rivals have seized on Iran’s initial role as further evidence of its malign influence in the region. On March 10, Saudi Arabia’s King Salman said that “Iran bears direct responsibility for the ‎outbreak of corona infection.” Bahrain accused Iran of “biological aggression” for initially covering up the spread of COVID-19 and failing to stamp the passports of Bahraini travelers to the country.

ASG Analysis - The Implications of COVID-19 for Iran and Region.pdf