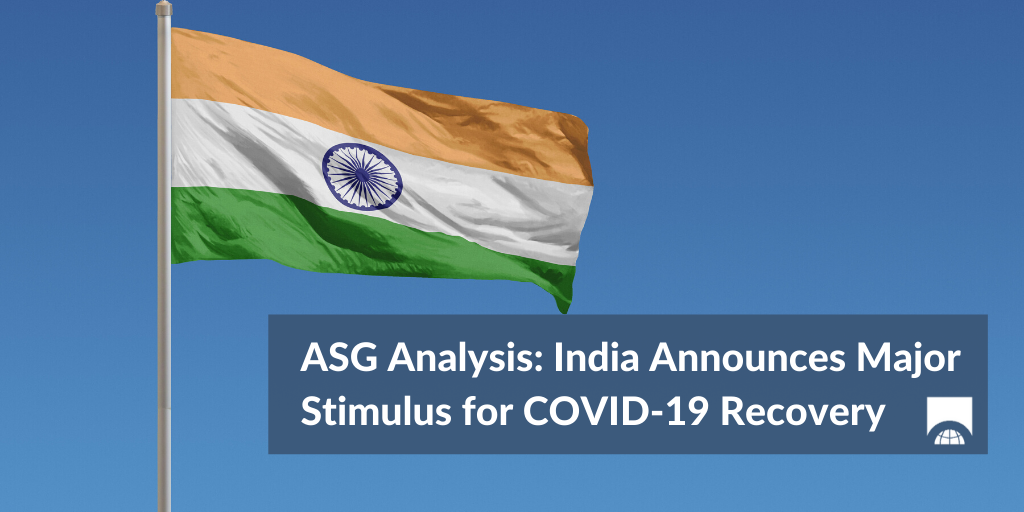 Why was the stimulus package necessary?

Although the government had announced relief packages in March and April, there was pressure by various constituencies to pass a more comprehensive package and outline a longer-term vision for economic recovery given the continued lockdown of the Indian economy and ongoing disruptions across global markets. Previous relief efforts included:

What does the May 12 stimulus package mean for business?

This latest stimulus package brings India’s total economic relief spending to 10% of the country’s GDP. The announcement was accompanied by a broader vision of “building a self-reliant India,” which Modi defined as a “set of drastic reforms and incentives to help Indian industry survive and thrive to meet the country’s demand for goods and services, as well as serve the world.” The Prime Minister underscored that self-reliance does not mean economic isolation, and that the country remains committed to building its globally connected economy.

The five pillars which will form the basis of this roadmap towards self-reliance were defined as: economic recovery, infrastructure, technology-driven ecosystem, demography, and demand.

“When India speaks of self-reliance, it does not advocate for a self-centered system. In India’s self-reliance there is a concern for the whole world’s happiness, co-operation, and peace.” – Prime Minister Modi

On May 13, Finance Minister Sitharaman announced the first sector-specific relief package addressing liquidity. The package focused on "getting back to work," enabling MSMEs to restart production by addressing structural liquidity issues. The announcement was broad-based and included measures to strengthen non-banking financial corporations  (NBFCs) and micro-finance institutions (MFIs), which lend to the MSME sector. The first package focused on the liquidity pillar of Modi’s promised reforms in land, labor, laws, and liquidity. Relief measures included:

Financial relief for MSMEs: MSMEs are eligible for Rs. 3 lakh crores (~$40 billion) in collateral-free automatic loans, Rs 20,000 crores ($2.65 billion) in subordinate debt for stressed/non-performing units, and Rs 50,000 crore ($6.6 billion) in equity infusions. The government expanded the classification of MSMEs to include more companies under the new programs.

Prioritizing local business: Global companies cannot participate in government procurement tenders up to Rs 200 crores (~ $26 million). The government has not released details on how this will be implemented. It is likely that “local” companies will be defined as companies manufacturing in India. Alternatively, the government could mandate that companies that wish to participate in these tenders have an Indian entity with a majority shareholding, or that over 50% of the value to the item under tender is rendered locally (unlikely but possible).

Additional measures: The package provides Rs 2500 crore (~$345 million) to support businesses by paying their employees through their employee provident funds. The deadline for filing income taxes was also extended till November.

A presentation released by the government on the stimulus package is available here.

Major industry bodies welcomed the measures to support the MSME sector, particularly the expanded definition of MSME. There was consensus among industry groups that the government has limited fiscal capacity and is therefore using indirect measures (such as guarantees and tax benefits) to support industry. However, MSME bodies argued that the measures do not match the distress in the industry, and that the bulk of MSMEs, especially micro-enterprises, will not be eligible to take advantage of the benefits.

Benefits for Migrant Workers and Farmers

On May 14, Finance Minister Sitharaman outlined the second set of relief measures addressing labor issues, which are intended to particularly benefit farmers and migrant workers. Key provisions include:

Financial assistance for farmers: India will provide Rs 30,000 crore (~$4 billion) in emergency credit support to farmers through the National Bank for Agriculture and Rural Development (NABARD) and Rs 2 lakh crore (~$26.5 billion) in concessional credit to farmers through Kisan credit cards. Approximately 30 million farmers will benefit from the credit support through NABARD and 2.5 million farmers will benefit from the credit provided through Kisan Credit Cards. Sitharaman also stated that 25 lakh new Kisan credit cards have been approved with loan limits of up to Rs 25,000 crores ($3.32 billion).

Support for migrant workers: The government will continue to provide migrants with a free supply of food grain for the next two months, benefiting approximately 80 million people. Migrant workers returning to states are now enrolled in the Mahatma Gandhi Rural Employment Guarantee Act (MGREGA) and states can use their disaster response funds to set up shelters and provide returning migrants with food. The central government will launch an affordable housing program for migrants.

Additional measures: Street vendors can access a credit facility of Rs 5,000 crore ($662.82 million) and working capital of Rs 10,000 ($132.56). Finance Minister Sitharaman also announced a 2% interest subvention on loans up to Rs 50,000 ($662.82) under the MUDRA Shishu Scheme. The government will extend the credit-linked subsidy scheme (CLSS) for middle-income earners until March 2021. To support the tribal community, states can create jobs under the Compensatory Afforestation Management and Planning Authority (CAMPA). Public distribution ration cards are now operational in all ration shops across all states.

A presentation released by government on the stimulus package is available here.

Industry observers noted that the measures included indirect support initiatives through credit guarantee and interest, rather than direct fiscal support, and therefore may not be sufficient to address the urgency of the migrant labor crisis. Similarly, while the extension of free food grains to migrant laborers is a welcome step and extends coverage to those previously left out of the public distribution system, the announcement was criticized for recycling old measures. The announcement also failed to ensure the safe return of migrant workers to their homes, a point that has attracted sharp criticism from the opposition Indian National Congress party and human rights organizations.