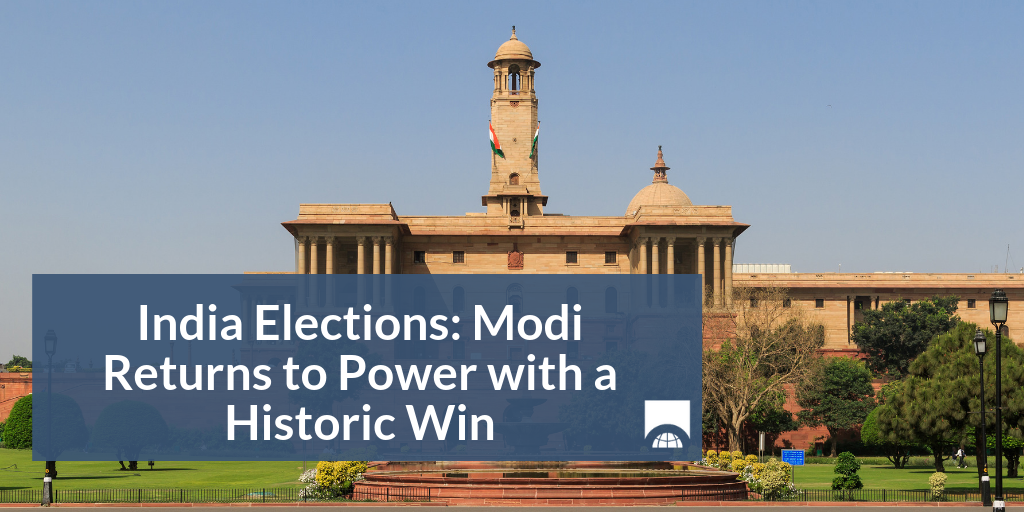 The Indian elections are the largest democratic exercise in the world, with 900 million eligible voters participating this year, 130 million of which were first time voters. The election witnessed a 67 percent voter turnout, the highest turnout recorded in general elections since India’s independence. The Lok Sabha, India’s lower house of parliament, consists of 543 constituencies, and over 1 million polling booths were set up to hold elections across these constituencies. Almost 4 million electronic voting machines and 11 million election officers helped ensure that elections were conducted smoothly and were free of violence.

Led by Narendra Modi, the BJP has emerged as the single-largest party in India since 2014. It had secured a landslide victory in the 2014 general elections on the promise of higher economic growth, creation of jobs, and economic development.

In its 2019 reelection campaign, the party ran on its track record of economic development, particularly the success of its programs related to health, sanitation, and infrastructure. The party also aggressively focused on the issue of national security after the February terrorist attack in Indian-administered Kashmir, which led to a skirmish with Pakistan. The party used India’s response to the terrorist attack as a symbol of the government’s decisiveness to reinforce Mr. Modi’s strong leadership credentials. The party also relied on Hindu nationalism to rally its base across India.

Led by Rahul Gandhi, who was seeking to become the fourth-generation prime minister from his family, the INC is India’s oldest political party. The party witnessed a humiliating defeat in the 2014 elections, winning just 44 seats in the Lok Sabha.  In the 2019 elections, the INC targeted the government’s development policies, the BJP’s economic management, and rising violence against minorities in the country. The INC called out the BJP-led government on the high unemployment rate, farmer distress, and India’s acquisition of multi-role fighter aircraft from France as evidence of the BJP’s corruption. 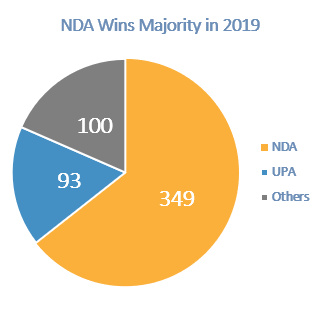 The incumbent NDA won 349 seats, with the BJP alone securing 303 seats. The NDA’s performance surpassed most exit-poll expectations; although they a suggested a win for the NDA, the magnitude of the win was unexpected.

The primary opposition alliance, UPA secured 83 seats. The INC, which is the majority party in the UPA, won only 53 seats. This result for the INC is lower than expected, and INC leader Rahul Gandhi - the face of the Congress party - lost one of the two seats he was contesting. Given that the INC secured less than 10 percent of the total seats, it will not be considered for the official position of the Leader of the Opposition. 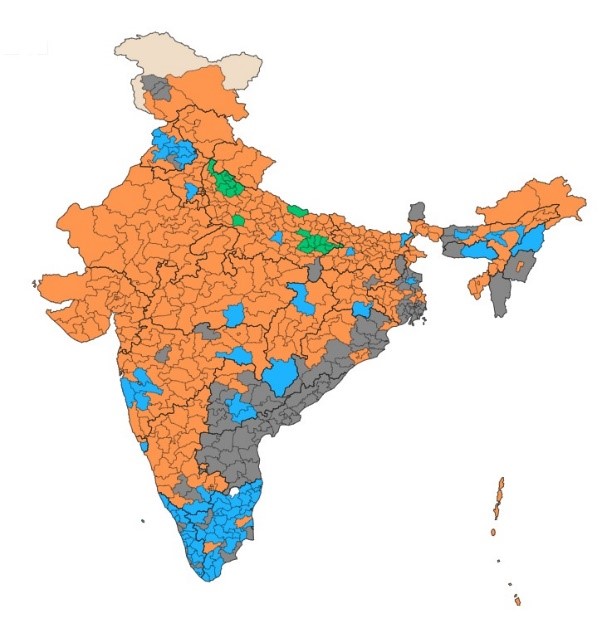 The BJP-led NDA coalition repeated its strong performance in the two key Hindi heartland states of North India - Uttar Pradesh and Bihar; the NDA won 101 out of the 120 total seats in these two states.

The BJP also made significant inroads in the eastern states of Bengal and Odisha and is expected to win 26 of the 63 total seats in these states, a net gain of 23 seats compared to 2014. The BJP also gained ground in India’s newly created state of Telangana in the country’s south, where it is expected to win 4 out of 17 seats, a gain of 3 seats compared to 2014; the UPA has maintained its traditional influence in the south.

The BJP also reversed its electoral defeats during the 2018 state elections in Madhya Pradesh, Chattisgarh, and Rajasthan, winning 62 out of the 65 total seats on offer.

Modi remains a popular political figure. Over the last five years, Mr. Modi has emerged as a popular figure across India. His strong leadership style, powerful oratory skills, and mass appeal have made him an influential leader. He symbolizes the idea of a strong and developed India and has been able to strategically unify diverse voting blocs along political, cultural, and economic lines.

BJP’s development schemes found resonance with the masses. The BJP introduced several development schemes and programs that sought to bring development and social welfare to economically marginalized communities across India. The provision of gas connections for people below the poverty line, affordable healthcare programs, and rural electrification had a positive impact on millions of households across India. While critics argued that these programs were not as impactful as they should have been, voters have concluded otherwise.

Opposition failed to offer a strong alternative. An apparent gap in the general election was a credible alternative to the BJP. Even though the principal opposition party, the INC, and other regional parties put up a strong fight against the BJP, they did not offer any new ideas or alternatives that captured the imagination of the voters. Voters remained under the influence of Mr. Modi’s charisma and political strength.

The BJP had an unparallel organizational structure. A key reason for the BJP’s resounding victory was its strong organizational structure and ground-game across India. The party successfully leveraged its large membership base and funding to carry the party’s message to the masses. The BJP’s formidable information technology and social media cell also played a crucial role in helping spread the party’s digital campaign over WhatsApp, Facebook, and other social media platforms.

The BJP’s national security message resonated with voters.  After weak electoral outcomes in the December 2018 state elections and following a February 2019 terrorist attack, the party shifted away from a message focused on socio-economic development and made national security and the vision of a strong India a central part of its campaign.

Majoritarian sentiments also helped the BJP. The party’s victory was also driven by its carefully-crafted Hindu majoritarian narrative, a risky move given that underplaying this message had served the party well in 2014.

What do these results mean for business?

Continued economic reforms are likely. Mr. Modi aggressively pursued economic reforms during his first term in office and it is expected that he will double-down on these efforts, seeking to improve the ease of doing business and encouraging more foreign investment. However, several protectionist policies were issued in the months leading up to the elections, and there is a risk that the BJP will view its historic win as a mandate to continue protectionism in key sectors.

Economic headwinds may pose a challenge. The government will come back to power at a time when the fiscal deficit is rising, there is a liquidity crunch in the financial sector due to rising non-performing assets, the rate of unemployment is edging up, and both urban and rural consumer demand is tapering off. Mr. Modi will have to address these issues early on in his second-term.

India-U.S. relations will face some challenges. Bilateral ties have taken a hit in recent months due to the imposition of tariffs by the Trump administration on Indian steel and aluminum products. The U.S. has also threatened to withdraw Generalized System of Preference (GSP) benefits for India.  With the Modi government declaring its intent to impose data localization, which would adversely affect U.S. companies, the trade relationship will face critical tests in the coming months.