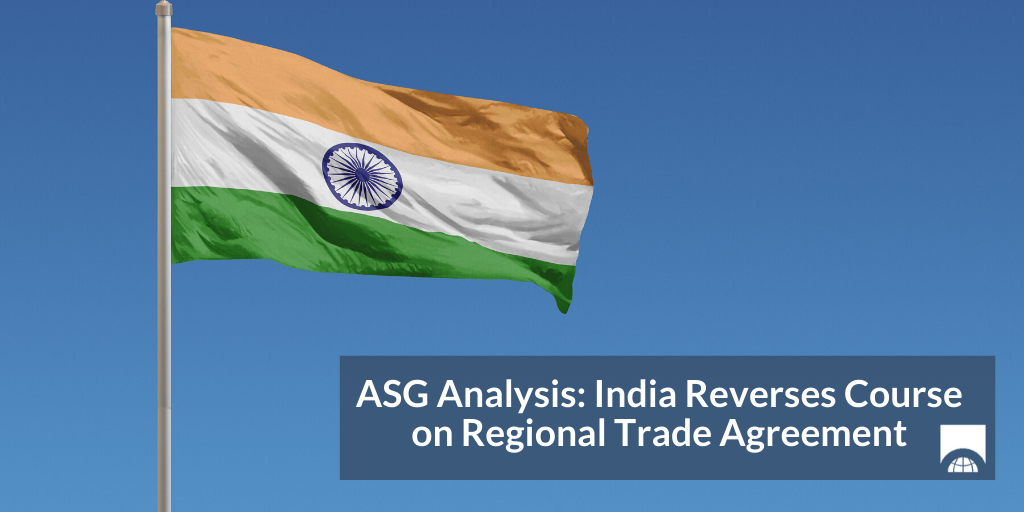 The Regional Comprehensive Economic Partnership (RCEP) is a proposed free trade agreement (FTA) between the 10 countries of the Association of Southeast Asian Nations (ASEAN) and six others who have FTAs with ASEAN. Negotiations began in 2012 and India’s decision to opt out of the partnership came on the back of 27 rounds of negotiations, four inter-ministerial meetings, and three annual summits.

RCEP’s goal is to boost regional economic integration to boost intra-regional trade and investment through a unified trade agreement, although the agreement does not include the same standards for labor, environment, and intellectual property rights protection as the 11-nation Comprehensive and Progressive Agreement for Trans-Pacific Partnership (CPTPP). The RCEP agreement would strengthen the bloc's bargaining power and enable greater trade and investment flows from the largest economies in the region, namely China and Japan. With India’s inclusion, RCEP would have included almost half of the world’s population and almost a third of the world’s total economic output. India would have been the third largest economy in RCEP.

Although India had been a part of RCEP negotiations for the past 7 years, there were inherent tensions in India’s position towards the partnership, due to the influence of domestic interest groups that have historically pushed for greater protectionism. While the BJP-led government of Prime Minister Narendra Modi had indicated a desire to join RCEP, the lack of domestic support and risk of losing the support of key domestic constituents, including farmers and small traders, led to India’s decision to opt out of the agreement. It is notable that this decision has been applauded by stakeholders from across the spectrum in India, a rarity given the polarized nature of politics in the country.

Indian negotiators presented several concerns that ultimately were not accepted, including in the final days before the announcement. The concerns raised by the Ministry of Commerce and Industry included:

Moreover, there was significant opposition to RCEP by domestic lobbies and interest groups. The Swadeshi Jagran Manch (SJM) and the Bharatiya Kisan Sangh (BKS), which are affiliated to the Rashtriya Swayamsevak Sangh (RSS), the ideological parent of the ruling BJP party, led the opposition to RCEP. These politically influential groups provide a strong base of support to the BJP-led government and their view that RCEP would damage small businesses, farmers, and manufacturers.

In recent years, these groups have become increasingly vocal about their opposition to the government’s economic liberalization policies. While many of these groups consider their positions to be pro-India, rather than anti-foreign, this dynamic has sharpened the long-standing internal tensions among Indian policy makers with respect to international trade.

India’s experience with other FTAs also played a key role in dampening support for RCEP, and there is a widespread belief that RCEP would harm India’s domestic industry. Both government and non-government stakeholders in India believe that FTAs have harmed various domestic sectors including metals, agricultural commodities, and dairy. The fear was that without sufficient checks and balances, RCEP would open the Indian market to cheap imports from China and cause irreparable damage to the economy.

Some experts have also argued that before India joins RCEP, it must push through drastic domestic reforms to reduce transaction costs, increase industrial competitiveness, and improve labor productivity. They have also argued that India is the least integrated economy within the RCEP framework, leading to substantial disadvantages in terms of the benefits that can be accrued. Without these reforms, India’s exports and domestic products would not be able to compete with products from other RCEP countries, leading to a further increase in the country’s trade deficit with RCEP partners, which is already over half of India’s total trade deficit. Proponents of the decision to withdraw from RCEP cite the possibility of bilateral trade agreements that are more tailored to India’s needs.

Minority views decision as a mistake

A few experts have criticized the government’s decision to opt out of RCEP, arguing that the decision will inflict long-term costs on the economy. Their view is that RCEP is an opportunity to gradually increase market access opportunities and eventually strengthen the country’s domestic market. These experts view RCEP as a way to better position India to be a part of global supply chains and note that India’s lack of participation in RCEP could decrease its competitiveness compared to Southeast Asian countries.

These experts view concerns about harm to the domestic economy as being exaggerated and unfounded and believe that lack of internal economic reforms, and not FTAs, are to blame for India’s economic pains. However, there is a consensus that India had some legitimate concerns about certain provisions and that the country adopted an ineffective negotiation strategy.

However, the decision to opt out of RCEP may dent Prime Minister Modi’s international standing, given that he has positioned himself as a reformer who is pro-trade and keen to attract foreign investment into India. The withdrawal from RCEP may give pause to foreign investors and companies, especially at a time when foreign companies have raised several concerns about domestic economic policy, particularly in the technology and manufacturing sectors.

The heads of states of the 15 remaining countries have stated they will move forward to implement the partnership in 2020, and countries like Japan have signaled that they will seek to engage India and allay the country’s concerns in the hopes of bringing India into the deal. However, given the headwinds faced by the Indian economy and domestic opposition to RCEP, it is unlikely that issues will be resolved anytime soon, and it is likely that RCEP will come into force in 2020 without India’s participation.

While the Indian economy may benefit in the short-term by avoiding the disruption and volatility caused by RCEP, the decision could carry longer term implications in terms of India’s ability to implement needed economic reforms, attract investment, and integrate with global supply chains.

Domestic industry lobbies in India continue to influence high-level decision making on economic matters. This reflects deeper sentiments that cut across multiple Indian governments, but it is notable that PM Modi remains responsive to these groups’ concerns at a time when he enjoys overwhelming domestic political support. Companies should develop strategies that account for these political dynamics, which are unlikely to subside in the near term.

Indian Commerce Minister Piyush Goyal will visit Washington, DC on November 13-14 to continue discussions with the U.S. on a trade agreement. The factors that drove India to opt out of RCEP could lead to reluctance to sign trade agreements with other countries. At the same time, since India’s RCEP decision signals at least a pause in its pursuit of regional trade, the imperative to develop stronger bilateral ties and generate investment becomes greater in order to meet its ambitious growth targets.