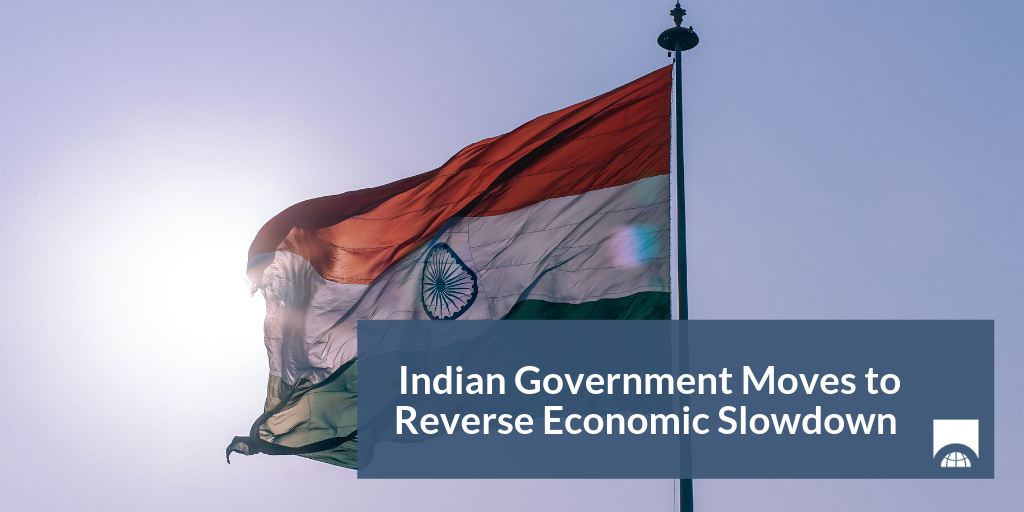 Following Prime Minister Narendra Modi’s landslide May victory, concerns about India’s economic performance have continued to mount: GDP growth slipped to a 7-year low of 5 percent and the unemployment rate was recorded at a 45-year high of 6.1 percent. Other indicators of consumer activity have continued to weaken, including sales of passenger vehicles, trucks, and tractors which showed negative growth rates in the first half of 2019. The government’s July budget, which did not include significant economic reforms, also dampened investor confidence and financial markets.

Deteriorating indicators and investor sentiment have jolted the government into action, and it is now pushing a three-pronged strategy to boost growth, increase foreign direct investment (FDI), and resolve long-standing structural issues plaguing the Indian economy.

Finance Minister Nirmala Sitharaman unveiled this strategy at a special press conference on August 23, announcing several measures aimed to spur growth, address implementation issues related to India’s Goods and Services Tax (GST), and provide support to core sectors such as auto manufacturing. Notably, she also announced a rollback of certain measures that had been criticized by independent economists and investors in a bid to assuage concerns about the government’s economic policies.

On August 28, India announced major changes in FDI policy for coal mining, contract manufacturing, single-brand retail trade, and insurance intermediaries to spur investment in the economy. The government has also decided to merge several major state-owned banks in a bid to improve their financial health and ease the credit crunch that has taken hold due to a high volume of Non-Performing Assets (NPAs).

To improve overall sentiment, the government has decided to end the surcharge on both short- and long-term capital gains by Foreign Portfolio Investors (FPIs). The surcharge, announced in the last budget, disappointed FPIs and led to a decline in foreign portfolio investment in the Indian stock exchange and a subsequent decline in the financial markets.

Deteriorating indicators and investor sentiment have jolted the government into action, and it is now pushing a three-pronged strategy to boost growth, increase foreign direct investment (FDI), and resolve long-standing structural issues plaguing the Indian economy.

The government also withdrew the ‘Angel Tax’ for startups registered with the Department for Promotion of Industry and Internal Trade (DPIIT) and assured investors that it would take proactive measures to end tax-related harassment, something that investors had been complaining about for several months. To deal with these complaints in a transparent manner, the government will establish a centralized system of income tax orders, notices, and summons from the tax department to increase accountability.

In an effort to address structural issues in the banking sector and low access to credit, particularly for small and medium-sized enterprises, the government injected additional liquidity of INR 70,000 crore (approximately USD 9.8 billion) to spur credit growth. The government has also introduced several measures to increase transparency, improve turnaround time, and reduce harassment of small business owners, a constituency that has vociferously complained of tough credit conditions.

The government has also decided to provide an increased liquidity support to housing finance corporations to increase the disbursement of loans – this is expected to spur housing finance and core sectors of the economy.

Ten major state-owned banks will be merged into a combined four banking institutions, bringing down the total number of state-owned banks from 27 to 12 in the coming weeks. Finance Minister Sitharaman has touted these merged banks as globally competitive with improved operational efficiency that will lower costs and enhance lending abilities.

The government announced governance reforms for the banking sector following the merger announcement. These reforms aim to improve the banks’ leadership and make their operations and management more effective. The government has also assured employees that lower costs would be achieved without laying off people working at these banks.

The government established a new organization to provide credit enhancement for infrastructure and housing projects; this is expected to increase debt funding for large infrastructure and housing projects. The government has also decided to operationalize a program to enable Indian companies to raise funds from Foreign Institutional Investors (FIIs).

The government has also announced the creation of an inter-ministerial task force to focus on investment in infrastructure over the next 5 years, aiming to accelerate the approval of new projects and to create additional jobs in the infrastructure sector.

These measures will be backed by increased government spending enabled through the Reserve Bank of India (RBI), which has decided to transfer approximately USD 24.6 billion from its contingency risk buffer to the government. Although some analysts have expressed concerns about the independence of the Central Bank, these funds will significantly expand the Modi government’s ability to provide a financial stimulus to a slowing economy.

The following changes have been made to FDI policy in India:

Following the U.S. decision in May to revoke India’s GSP status, and India’s decision in June to apply tariffs on 28 products, U.S. and Indian negotiators are continuing informal talks to address outstanding trade irritants.  At the recent meeting between Prime Minister Modi and President Trump on the margins of the G7, the two leaders did not make any substantive trade-related announcements but agreed that their top negotiators should meet ahead of PM Modi’s visit to the U.S. later this month.

The interventions by the Government of India to kickstart the Indian economy show a serious intent to reverse the slowdown and instill confidence among global investors as well as within the country. These reforms, along with the RBI’s continued monetary policy support, are expected to have a positive impact on the Indian economy and should ease India’s ongoing cyclical slowdown. However, they are unlikely to sufficiently boost economic growth in the short- and medium-term and the government may introduce further measures to stimulate economic growth and spur consumer demand.