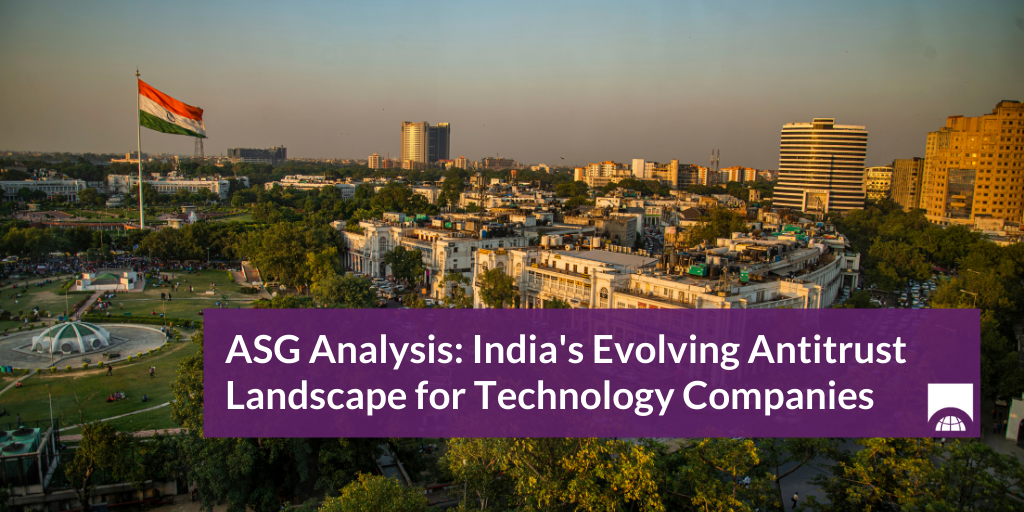 The technology space can challenge traditional antitrust notions, and Indian antitrust policymakers and regulators have generally refrained from substantially intervening in technology companies’ conduct. But that restraint is waning, in part due to sharp increases in antitrust scrutiny in the United States and Europe. Businesses engaging with the Indian government should take this into account.

India has relatively young competition jurisprudence, and frequently draws on more advanced jurisprudence from other regions. This is sometimes done through memorandums of understanding (MoUs) – such as with Brazil to discuss best practices – but observers frequently overstate the role of such MoUs. Though MoUs encourage India to draw from other jurisdictions, primary motivations for doing so are (a) convention and (b) compelling, bespoke arguments for why a certain practice from a particular jurisdiction applies in a specific Indian case.

India has traditionally looked – and continues to look – to Europe for legal precedent, including on antitrust issues. Though Europe has exercised significant antitrust scrutiny and frequently investigated and intervened in companies’ conduct for many years, its scrutiny has recently increased. This is evident from multiple investigations launched by the European Commission, and legislation such as the Digital Markets Act to help the Commission detect and prevent alleged anticompetitive behavior in the digital sector.

Antitrust developments in the U.S. can affect India more indirectly, but still significantly: Indian policymakers and regulators have seen India’s technology innovation ambitions as closer to the U.S.’ landscape than to Europe’s, and have therefore drawn lessons from the U.S. too, sometimes more so than from Europe. Businesses engaging with the Indian government often underappreciate this dynamic.

Washington’s generally restrained approach helped foster New Delhi’s, but now the U.S. appears to be rapidly aligning with Europe on antitrust. This is clear from several recent developments, including the introduction of multiple bills in Congress to curb large technology companies’ alleged power; numerous lawsuits brought by the government against technology companies; the appointment of key regulators who have expressed significant competition-related concerns with technology companies; and an executive order aimed at strengthening antitrust enforcement. With U.S. restraint waning, so is India’s, as we had anticipated.

Another reason for India’s changing attitudes is a new, general culture of concern among Indian policymakers and regulators in relation to non-Indian technology companies, prompting enhanced scrutiny. Antitrust scrutiny is just one example; others include scrutiny over data protection, data localization, content moderation, data-sharing, taxes, and so on.

India’s new approach to antitrust in the technology space is evident in actions by India’s competition regulator, the Competition Commission of India (CCI), and in policy moves more broadly.

The CCI has been conducting numerous investigations of technology companies, including into the business practices of Amazon and Walmart’s Flipkart; Apple’s conduct in relation to its in-app purchase system; and WhatsApp’s updated privacy policy, despite ongoing international debate regarding the appropriateness of addressing privacy issues through antitrust enforcement. Additionally, the CCI recently launched three investigations into Google’s conduct regarding smart TVs, the Android operating system, and the Play Store.

However, the CCI’s limited institutional capacity may somewhat constrain this spike in scrutiny. For example, most of the CCI’s very few members have limited or no legal experience, let alone antitrust experience. Recognizing such limitations, a draft bill released last year proposed increasing the number of CCI members and creating a governing board to manage its administrative affairs, but that bill has not yet been introduced in Parliament. Capacity limitations could reduce the substantive and/or procedural rigor of the CCI’s investigations, potentially rendering them vulnerable to judicial intervention. Notably, CCI actions have often been overturned on procedural grounds.

That said, observers often overstate the effect of these capacity limitations. The CCI has successfully concluded several expansive investigations, including by relying on staff beyond its members and on the office of the Director General, the CCI’s fact-finding wing. Further, Indian courts seem increasingly reluctant to intervene in antitrust matters, making it important for businesses to engage meaningfully with the CCI rather than rely on the prospect of judicial intervention.

Crucially, India’s antitrust landscape goes beyond the CCI, a fact that businesses often underappreciate. Much of the antitrust action is taking place in the broader policy arena, and so engaging in that arena is also vital.

In fact, arguably the most significant ongoing antitrust development in India – one that many businesses and commentators have paid insufficient attention to from an antitrust perspective – is India’s emerging non-personal data (NPD) policy framework. The cross-sector framework essentially proposes that businesses operating in India share data with the government and with each other. The framework’s first draft raised several significant antitrust-related concerns for businesses. Some observers welcomed the second (and current) draft – believing it eliminated or essentially eliminated those concerns – but in reality, the concerns, though reduced, remain significant.

Other policy moves have also raised significant antitrust-related concerns for technology businesses operating in India. For example, India proposed amendments to e-commerce rules seeking to, among other things, prohibit any (broadly defined) “e-commerce” entity from: (a) “abus[ing] its dominant position,” even though preventing such abuse already falls under the CCI’s jurisdiction; or (b) “manipulating search result[s],” even though “manipulating” is ill-defined (thereby potentially attacking quality-enhancing features of search results) and the CCI has already investigated such issues. For example, the CCI conducted an extremely broad, long-running, and high-profile investigation of Google’s many allegedly anticompetitive displays of search results, and found them procompetitive.

Technology businesses operating in India should closely monitor these and related developments and consider timely engagement in India’s antitrust space – both at the CCI and in the broader policy ecosystem – taking into account the strategic insights discussed above.