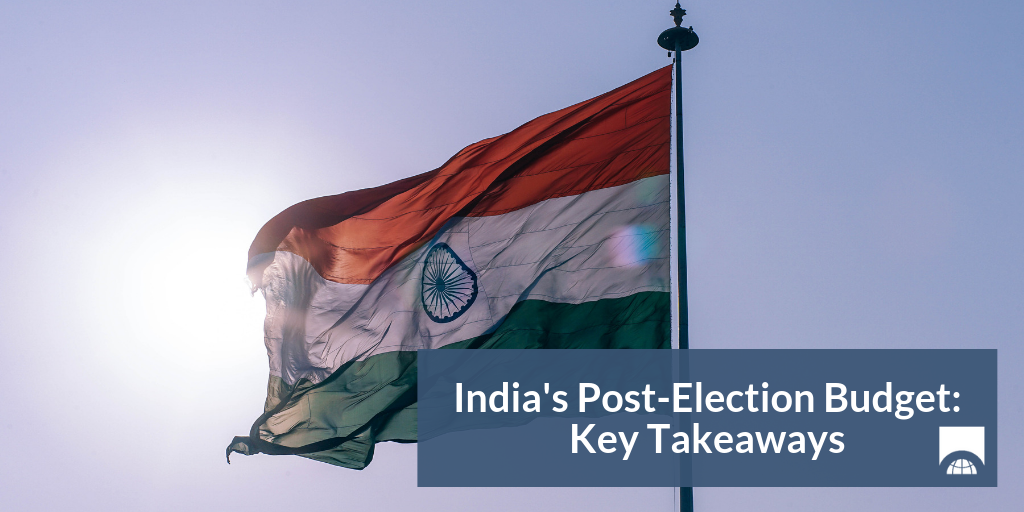 The budget, which refers to a conservative “virtuous cycle” of investment, comes at a time when the Indian economy is facing increasing headwinds. Economic growth is slowing, unemployment is at an all-time high, and non-performing assets (NPAs) in the financial sector have increased significantly in recent months.

While the budget did not include structural reforms, several provisions are expected to improve the ease of doing business and make it easier for entrepreneurs to access credit.

The importance of these new measures highlights the considerable slowing of new credit advances over the last few years due to the poor financial health of India’s commercial banks and non-banking financial companies (NBFCs).  The new measures include:

Fiscal discipline is a priority

The budget demonstrated a strong commitment to fiscal discipline, including an ambitious target for tax revenue in 2019-2020, which will be achieved by increasing compliance among existing taxpayers and widening the tax base in the country.

Tax surcharges have been increased for Indians who earn over USD 290,000. However, corporations whose annual turnover is below USD 58 million will now pay a reduced 25 percent annual corporate tax. This rate was previously only applicable to companies with a turnover limit of USD 7.2 million, and now 99.3 percent of all Indian corporations will be eligible for a lower 25 percent annual corporate tax rate.

It is notable that India’s World Bank ease of doing business ranking under the “paying taxes” category has improved from 172 in 2017 to 121 in 2019. The announcements made under this budget will further improved the ease of filing taxes by allowing for the Permanent Account Number (PAN) card to be used interchangeably with Aadhar, India’s Unique Universal ID.

The government has also proposed to start raising part of its gross borrowing program by tapping into the international bond market. As a percentage of GDP, India’s public external debt is among the lowest in the world and currently stands at less than 5 percent, giving the government significant room to raise foreign bonds to meet its financing needs.

Development programs continue to be a priority for the government

In the recently concluded elections, Prime Minister Modi greatly benefitted from the development programs rolled out during his first term. The government has continued to maintain its focus on these programs, and the finance minister announced a new development program that seeks to provide access to clean water to every household in India. The government has also reemphasized the importance of key developmental programs launched during Modi’s first term, including the Affordable Housing for All, Swachh Bharat Mission (Clean India Program), Ayushman Bharat (National Health Insurance), Saubhagya (Universal Electricity Access), and the Ujjwala Scheme (Affordable subsidized LPG cylinders for the poor).

The budget seeks to promote manufacturing by both large-scale companies and MSMEs through several provisions:

The government announced an outlay of USD 1.4 billion to encourage adoption of EVs and establish the required infrastructure for EVs across the country. GST rates on EVs have been lowered from 12 percent to 5 percent and the government will also provide a USD 2,191 tax deduction for interest on loans taken to purchase EVs.

The government will set up New Space India Limited (NSIL) as the commercial arm of the Department of Space. Making use of Indian Space Research Organization research, NSIL will spearhead the commercialization of several space products, including production of launch vehicles, transfer to technologies, and marketing space products.

The budget commits to a USD 145 billion investment in infrastructure over the next five years. Several new infrastructure projects have been announced, including:

The budget includes several reforms to promote entrepreneurship. This includes easing procedures to reduce scrutiny on conflicts between the income tax department and investors and funds over the angel tax; relaxed conditions to carry forward and set-off of losses for start-ups; and a television program by the national broadcaster to exclusively promote start-ups across India.

To further boost digital payments, the government will levy a tax deduction of 2 percent on cash withdrawals exceeding USD 146,110 annually. All business establishments with an annual turnover above USD 7.2 million will be mandated to offer low-cost digital modes of payment to their customers. No merchant discount rate will be imposed on these transactions; the RBI and banking institutions will absorb these costs from the savings that will accrue to them.