OVERVIEW OF THE BUDGET

India’s 2016-17 budget, released February 29, strikes a careful balance between growth and fiscal discipline. The government has committed to increasing public investment to catalyze growth at a time when private investors look reluctant to invest. Amid tepid global demand due to the Chinese economic slowdown, the budget aims to revitalize domestic demand as the chief driver of economic growth. The focus of the budget is on the agricultural and infrastructure sectors, two of the most critical sectors that require immediate attention. At the same time, the budget maintains India’s commitment to fiscal consolidation, boosting confidence in the country’s macroeconomic fundamentals.

The clear shift in focus towards agriculture and allied sectors is expected to stimulate consumption. Prime Minister Narendra Modi’s massive victory in 2014 raised hopes among analysts and investors that his government would usher in major economic reform. Through his first two years in power, his National Democratic Alliance (NDA) government leveraged its political capital to concentrate on roads, railways and the ease of doing business, in a bid to build trust with the private sector. However, the benefits of this strategy have yet to reach the rural community. Poor weather conditions compounded this problem, and serious agrarian distress, followed by an electoral defeat for the NDA in the politically significant and largely agricultural state of Bihar, led the government to reconsider its economic focus. In the new budget, the government has devoted its attention to a series of focused relief measures instead of big bang reforms.

Several initiatives, viewed together, constitute the first steps towards a comprehensive social safety net. The government has extended access to agricultural credit and health insurance. Finance Minister Arun Jaitley also announced carefully crafted measures to promote affordable housing, spread digital literacy, create a conducive environment for technology driven start-ups, especially for lower caste entrepreneurs, and support education, while pledging more funds to anti-poverty programs such as the Mahatma Gandhi National Rural Employment Guarantee Scheme (MGNREGS). The MGNREGS is a right to work program that guarantees 100 days of unskilled work to every household, and though there has been some confusion about the extent of the NDA government’s commitment to maintaining the scheme, increased allocations should alleviate fears that it might be dismantled. One new initiative is the National Dialysis Services Programme, which aims to help poor patients with renal problems under the National Health Mission. The program also promises to cut customs duty for some equipment used in a dialysis machine. Jaitley’s ambitious proposal to give 50 million households liquefied petroleum gas connections in the next three years will reduce reliance on unsafe and unclean cooking fuels.

Jaitley also deserves praise for striking a tricky balance in his third Union Budget and eschewing the allure of populist measures to bolster his government. While the budget was short on the big bang reform some observers are eager to see – there was little movement towards a goods and services tax, for instance, and not much on subsidy rationalization – Jaitley announced the NDA government’s intention to stick to its fiscal targets, which is encouraging and offers headroom to the RBI to cut key interest rates. Maintaining India’s deficit target of 3.5% also signals the government’s commitment to macroeconomic stability, matched by the budget document’s conservative assumptions on tax revenue and growth rates. The attention to infrastructure creation – building roads and railways, improving installed power capacity and connecting villages to the grid – is welcome. According to several studies, every rupee spent on such works contributes two rupees to the country’s output each year. It is also encouraging that the government is sticking with Aadhaar, its potentially game-changing unique identity scheme, and will give it statutory backing. Aadhaar can be used to revolutionize service delivery and dramatically reduce leakages – the direct benefits transfer trial for fertilizer subsidies in 20 districts announced in the budget will be a pivotal test case for the system.

However, the Modi administration continues to send mixed messages on the retrospective tax law, denouncing it without repealing it. Nevertheless, the Prime Minister has reiterated his commitment to a predictable tax regime and is taking clear steps to ensure the rest of the government is on board. And while it is encouraging that the finance ministry recognizes the seriousness of the challenge faced by public sector banks reeling from a substantial increase in non-performing assets, the amount set aside for their recapitalization is paltry compared to the scale of the problem. The finance minister has subsequently indicated potential consolidation of public sector banks and a resurgence in efforts to collect from large defaulting borrowers.

Politically, though, this is a smart budget. Perhaps unsurprisingly for a government that has faced criticism from the opposition – and lost an important state election in Bihar – for not doing enough to alleviate rural distress, much of the budget focuses on the revival of agriculture and on increasing rural incomes. Stimulating rural demand in the short term and transforming agriculture in the long run is also economically prudent. By concentrating on the farmer, at least in the budget speech, the finance minister has staved off an outcry from the opposition, which should strengthen the government’s position in Parliament and help its legislative agenda. The Modi government has authored a budget that is a step in the right direction – economically responsible, politically pragmatic and socially prudent. 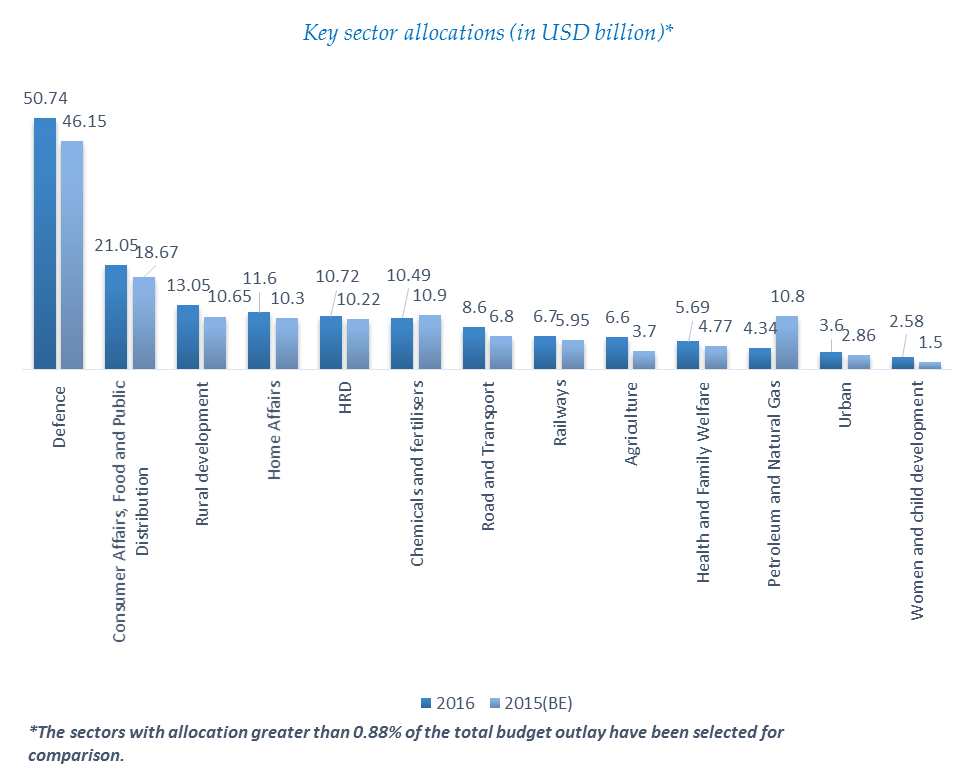 Emphasis on farming and rural development

The budget includes $16 billion in measures to benefit the rural population, including job creation schemes and funds earmarked for rural infrastructure development. In a speech just before the budget was announced, Prime Minister Modi promised to double farmers’ income by 2022.

Jaitley unveiled a slew of measures to boost the infrastructure sector. The budget hikes public investment in the sector by 22.5% and allocates $32 billion to construct 10,000 km of new national highways and revamp an additional 50,000 km of existing highways.

The government also seeks to revitalize the management of stressed assets by altering the norms for asset reconstruction companies and increase the availability of cheap financing alternatives for the infrastructure sector. The railway budget offers an array of possibilities for logistics. Some key announcements, like that of the creation of a transport development corporation and multi-modal depots, have already received positive feedback from the industry.

To meet the objective of training ten million young people for employment over the next three years, the budget includes several measures to boost spending on education.

Reforms to improve corporate governance and ease of doing business

Though there are few new major reforms, the budget seeks to enable an efficient and effective government, cutting down on red tape and making it easier to do business.

The government has pledged to introduce amendments to crucial acts and bills, such as the bankruptcy code.