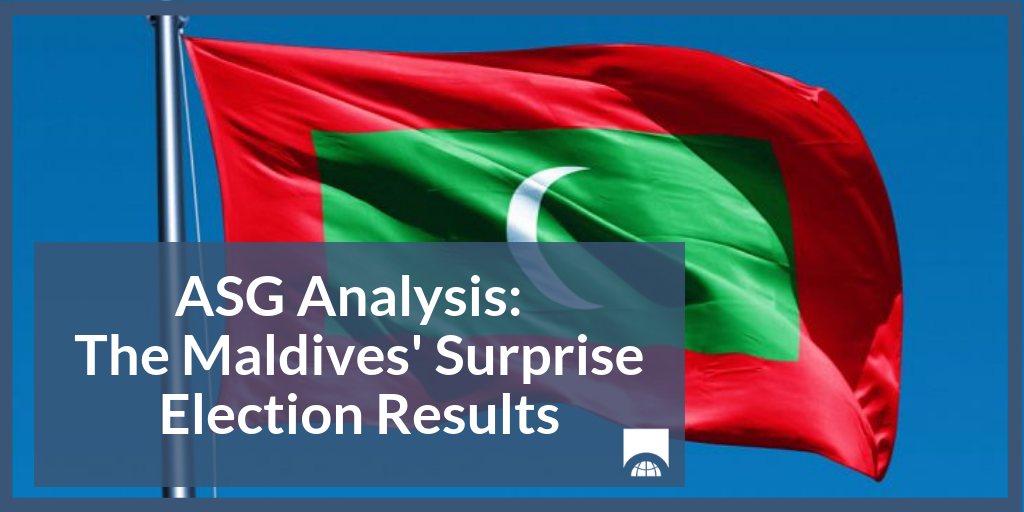 On September 23, a voter turnout of 90 percent in the Maldives’ presidential election led to a surprise loss for authoritarian leader Abdullah Yameen. Ibrahim Mohamed Solih, leader of the opposition Maldivian Democratic Party (MDP), was declared the winner with 58 percent of the vote.

President Yameen initially accepted defeat after the results were announced but subsequently challenged the results, filing a legal petition in the country’s Supreme Court. Mohamed Saleem, lawyer to the President, said that the complaint was filed due to “a lot of complaints from supporters” about the electoral process.

Yameen’s party, the Progressive Party of the Maldives (PPM), had said that the party has "been overwhelmed with numerous genuine concerns related to the elections, including serious allegations of vote rigging, fraud, malpractice, and corruption." Four members of the Maldives Elections Commission subsequently fled the country, claiming that they had been targeted with "threatening calls and messages" since election results were declared. Among the claims of fraud made by Yameen was that the election was rigged using “invisible ink” to tamper with the ballots.

On October 21, the Supreme Court upheld the results in a unanimous decision, paving the way for Solih to take over in the coming weeks. “The court rules that there is no legal or constitutional basis to question the legality of the election based on the evidence submitted to this court,” said Chief Justice Dr. Ahmed Abdulla Didi.

Solih’s victory should mark the end of Yameen’s reign over the island nation, and the incoming administration now seeks to prevent him from leaving the Maldives to avoid potential prosecution for misdeeds while in office. Yameen’s term was marred by an erosion of democratic norms, including arrests of opposition leaders, his refusal to follow the ruling of the Supreme Court, and allegations of widespread corruption.

Election results a blow to China and Saudi Arabia.

During his administration, Yameen had established a close relationship with the Chinese and Saudi governments, with the Chinese making significant investments in the Maldives under the Belt and Road Initiative (BRI) over the last few years. India has consistently raised concerns over China’s “debt-trap diplomacy.”

Under Yameen, the Maldives experienced a major increase in Chinese influence, including a recent free trade agreement that was negotiated signed, and ratified in a matter of hours, prior to a state visit to Beijing by Yameen. Another concern during Yameen’s presidency was the discussions with China on building a permanent naval base in the Maldives.

In 2017, there were allegations that Yameen intended to illegally transfer control of one of the Maldives’ 26 atolls to Saudi Arabia in exchange for USD $10 billion in “investments.”

Initial outreach to and from President-elect Solih underway.

The Indian high commissioner to the Maldives, Akhilesh Mishra, was the first diplomat to call on President-elect Solih. The was followed by a visit from China’s ambassador to Maldives, Zhang Lizhong, who extended an invitation for the Maldivian leader to visit Beijing after his inauguration. In early October, U.S. Principal Deputy Assistant Secretary Alice Wells visited the Maldives, where she reiterated a commitment to both countries’ “shared interests in a prosperous and open Indo-Pacific.”

Solih has invited Indian Prime Minister Modi to his November 17 swearing-in ceremony. He also has tried to reduce Chinese unease over projects initiated during the Yameen-era, saying that while his government may review Chinese-backed infrastructure projects, withdrawing from these agreements was not a given. Solih made these statements after Mohamed Nasheed, former president and ally of Solih, demanded that the new government review all the agreements that Maldives had signed with China under Yameen's five-year rule (2013 - 2018).

Reforms and corruption investigations to be the new government’s focus.

In its manifesto, Solih’s Maldivian Democratic Party (MDP) has pledged to focus on political, judicial, and security sector reforms to help the Maldives during this democratic transition. The MDP also has pledged to pass a whistle-blower protection law that would streamline efforts to combat government corruption. In addition, the MDP pledged to introduce a decentralized system of government by creating island councils that are empowered to raise finances and determine their respective island’s affairs, as well as a progressive income tax law. During the campaign, Solih said that if elected, his government would not only continue ongoing projects but also initiate new projects to develop tourism and housing facilities, while protecting the heritage and Islamic identity of the country.

An NGO report released days before the election lays out many of the challenges inherited by the incoming government. Published by the Organised Crime and Corruption Reporting Project (OCCRP), a consortium of investigative centers, media, and journalists, the report alleges that at least 50 prized tropical island leases were obtained, often at hugely discounted prices without public tender, and that government ministers embezzled much of the proceeds from these tenders. It also alleges that President Yameen personally intervened to help clear at least 24 deals to lease islands to tourism companies.

Former tourism minister and vice president, Ahmed Adeeb, alleged to be at the center of this scheme, is currently serving a decades-long sentence for corruption and for plotting to assassinate Yameen. Abdulla Ziyath, Adeeb’s friend and co-conspirator, also was jailed for corruption and is serving an eight-year sentence. Ziyath led the Maldives Marketing & Public Relations Corporation (MMPRC), an organization which was established in 2009 to promote tourism and later became the central authority distributing new island leases to companies.

It is expected that Solih’s government will push for further investigations related to these allegations, and the proposed whistleblower act may provide cover for officials with inside knowledge of how these dealings took place.

The surprise victory of Solih opens the doors for a democratic transition in the Maldives. The transition is expected to bring greater transparency for how the government deals with foreign investors and may expose those who benefited from crony capitalism and corruption. For foreign investors who have faced challenges in working with the Yameen-led government, the reform and anti-corruption agenda of Solih’s incoming government should lead to an improvement in the business climate in the Maldives.

U.S. Deputy Assistant Secretary Alice Wells’ visit to the Maldives also signals an improvement in the relationship and signals a potential for greater U.S. engagement with the Solih government. This should further bolster the incoming government and lead to increased FDI interest from foreign investors.