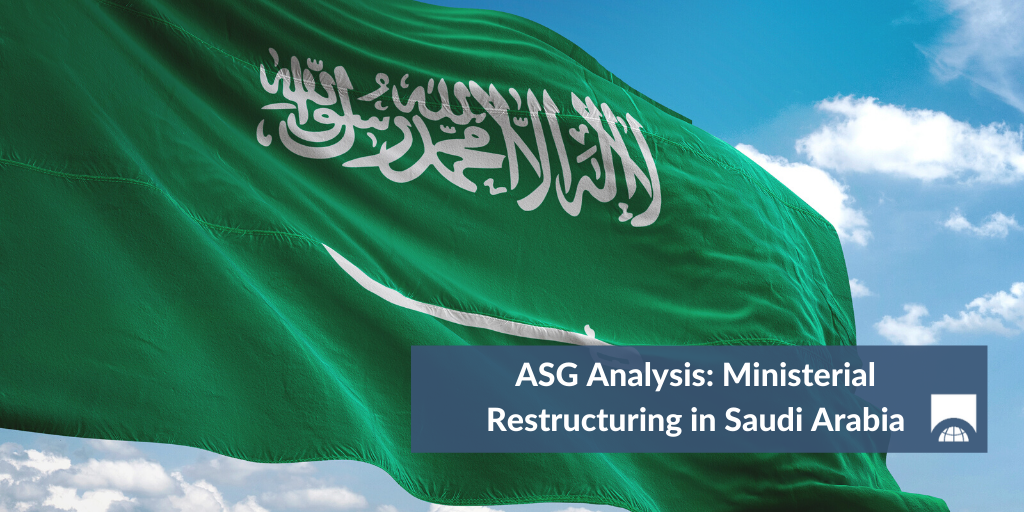 In a series of Royal Decrees issued on February 25, Saudi Arabia’s King Salman announced the formation of three new ministries, the merger of two others, and several senior leadership changes. The changes followed a smaller government reshuffle last October, which saw the replacement of two ministers and the creation of a new data and artificial intelligence authority. Below is an overview of the most important organizational and leadership changes.

The investment ministry will be more empowered than SAGIA had been to make major decisions and influence other government entities. It will be led by Khalid Al-Falih, who returns to government after being replaced as energy minister and chairman of Aramco in September 2019. In line with SAGIA’s absorption into the new ministry, SAGIA Governor Ibrahim Al-Omar has been removed from his post.

The investment ministry will be more empowered than SAGIA had been to make major decisions and influence other government entities.

Al-Falih has long been among the most influential businessmen and officials in the Kingdom and is well-regarded in the global business community. He was known to be dismissive of SAGIA during his time as energy minister and, in keeping with his high profile within the Kingdom and abroad, he will likely place more emphasis on attracting major investments than on assisting the local management teams of smaller foreign investors.

It remains to be seen whether Al-Falih will exert influence over the Saudi Public Investment Fund (PIF), which is by far the most powerful investment tool available to the Kingdom and is responsible for financing much of Vision 2030. It would not be surprising if the Minister also took over the privatization file from the Ministry of Economy and Planning, which has struggled to make progress on this challenging portfolio.

A tourism ministry will replace the Saudi Commission for Tourism and National Heritage (SCTH), signaling the importance of tourism as a key pillar of Vision 2030 and the seriousness of government efforts to transform Saudi Arabia into a tourism hub. The creation of a tourism ministry had been anticipated for some time and follows major changes to the Saudi tourism landscape last year. In October, the Kingdom opened itself up to international tourism for the first time, offering tourist visas on arrival to visitors from 49 countries.

Unlike its predecessor, the new ministry will focus squarely on tourism and hospitality, since the national heritage portfolio was recently transferred to the Ministry of Culture. In the near-term, the ministry will likely seek to build on the progress the Kingdom made last year in attracting foreign investment in the sector. Last fall, the SCTH and SAGIA announced $27 billion worth of agreements in hospitality, leisure, transport, and real estate development.

[The creation of a tourism ministry] signal[s] the importance of tourism as a key pillar of Vision 2030 and the seriousness of government efforts to transform Saudi Arabia into a tourism hub.

Ahmed Al-Khateeb, the President of the SCTH, will head the new ministry. A powerful figure in defense circles and close confidant of the crown prince, Al-Khateeb is also chairman of Saudi Arabian Military Industries (SAMI), the state-owned defense contractor, and has served in a variety of senior positions, including Chairman of the General Entertainment Authority (GEA) and Minister of Health.

The King also decreed the formation of a sports ministry, replacing the General Sports Authority (GSA). This move formalizes the Kingdom’s emphasis on the promotion of sports, another recent focal point of Vision 2030. Saudi Arabia has made the hosting of international sports events a key aspect of its strategy to develop the entertainment and tourism sectors. Major golf, tennis, boxing, and other sporting events have taken place in recent months. The Kingdom has also highlighted the promotion of sports among young people as a way to help combat high and rising rates of obesity and diabetes. The sports ministry will be headed by Prince Abdulaziz bin Turki Al-Faisal, who had also led the GSA.

Other significant changes include the absorption of the Ministry of Civil Service into the Ministry of Labor and Social Development—forming the new Ministry of Human Resources and Social Development—as well as several senior leadership changes. Majid Al-Qasabi, a highly respected minister close to the Royal Court, will serve as Acting Minister of Media, replacing Turki Al-Shabana, in addition to retaining his role as Minister of Commerce. Al-Qasabi is known for his fast-paced, high-pressure approach to changing personnel, organizational structures, and regulations. Presumably to allow him to focus on his new media portfolio, Al-Qasabi will be replaced as Acting Minister of Municipalities and Rural Affairs by Minister of Housing Majed bin Abdullah Al-Huqail.

H.E Khalid Al-Falih has been appointed Minister of Investment. An oil industry veteran, Al-Falih previously served as the Minister of Energy, Industry, and Mineral Resources and Chairman of Aramco, until he was removed from both positions in September 2019 following rumored disagreements with the crown prince and a perceived failure to move quickly enough with the planned Aramco IPO. His removal was accompanied by the separation of the Ministry of Energy from the Ministry of Industry and Mineral Resources.

H.E. Ahmed Al-Khateeb has been elevated from his role as President of the Saudi Commission for Tourism and National Heritage (SCTH) to Minister of Tourism. He is also Chairman of the Saudi Arabian Military Industries (SAMI), the state-owned defense contractor, and sits on the boards of the General Authority for Military Industries (GAMI), which regulates military procurement, and the Public Investment Fund (PIF). Al-Khateeb previously served briefly as Chairman of the General Entertainment Authority (GEA) and, before that, as Minister of Health and Chairman of Jadwa Investment.

H.R.H. Prince Abdulaziz bin Turki Al Saud has been elevated from his role as Chairman of the General Sports Authority (GSA) to Minister of Sports. He is an accomplished motorsportsman and former winner of the Porsche GT3 ME Championship. Prince Abdulaziz is the son of Prince Turki bin Faisal Al Saud, the longtime Director of General Intelligence who served more recently as Ambassador to the U.S. and UK, and the grandson of King Faisal (r. 1964-1975).

H.E. Majid Al-Huqail has been appointed Acting Minister of Municipal and Rural Affairs, replacing Majid Al-Qasabi. Al-Huqail will retain his role as Minister of Housing, which he has held since 2015. He also chairs the Kingdom’s real estate consumer protection and investment attraction authorities. Before his time in government, Al-Huqail held senior roles with of some of the largest financial and real estate firms in Saudi Arabia, including CEO of Raval Real Estate Development Company, Chairman of the Board of Al Jazeera Capital, and a Board Member of Credit Suisse SA.

H.E. Dr. Majid Al- Qasabi has assumed the role of Acting Minister of Media in addition to retaining his post as Minister of Commerce, albeit with a narrower portfolio now that the investment function has been absorbed into a separate investment ministry. He will transition out of his role as Acting Minister of Municipal and Rural Affairs. Al-Qasabi also sits on the Council of Economic and Development Affairs (CEDA), one of two subcabinets in the Kingdom, and on the board of the GEA.

H.E. Ahmed Al-Rajhi has been appointed the new Minister of Human Resources and Social Development following the merger of the Ministry of Labor, which he has headed since 2018, with the Ministry of Civil Service. In this role, he will continue to serve as chairman of the Human Resources Development Fund (HRDF), which provides a variety of incentives for companies that commit to training and hiring Saudis. Al-Rajhi is the son of prominent Saudi businessman Sulaiman Al-Rajhi, a founding member of Al Rajhi Bank, and is an influential figure in the business community in his own right, as Chairman of the Riyadh Chamber of Commerce and Industry and Deputy Chairman of the Federation of GCC Chambers.