ASG Analysis: Modi Reshuffles His Cabinet With an Eye To Coming Elections 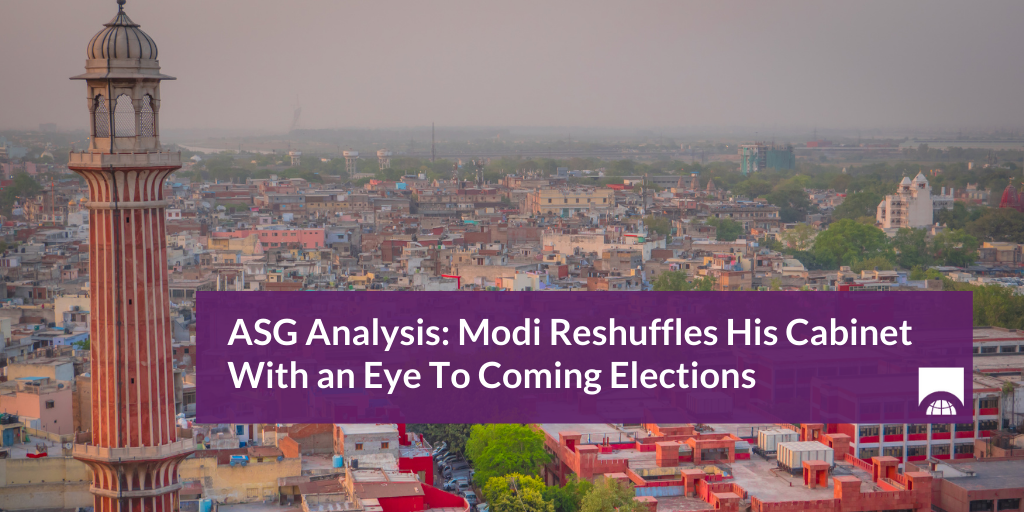 On July 7, Prime Minister Narendra Modi announced a significant Cabinet reshuffle, the first of his second term. While the reshuffle has been positioned as an expansion of the Union Cabinet, the changes in high-profile ministerial portfolios, the elevation of certain public officials, and the induction of several new ministers comes at a time when the Modi government faces reputational challenges emerging from the country’s response to the second wave of the pandemic, the ongoing farmer protests, and introduction of new technology regulation. It also comes at an important juncture in PM Modi's second term as he refocuses on his priorities for the second half of the term and marshals resources to seek future electoral success.

Four features of the new Cabinet are particularly notable:

With general elections three years away and given the criticism the government has received in the last two years, the Prime Minister’s Office (PMO) is keen to deliver results. Modi no doubt hopes that the new faces added to the Cabinet will also be eager to prove themselves and show significant results. Displaying a new, young, and “shining” Cabinet will be critical for the 2024 general elections.

While the full implications of the changes are not yet clear, we forecast three key likely results. First, by introducing new leadership in Health, Education, Labour, and small businesses (Ministry of Small and Medium Sized Enterprises), Modi and his team are bringing much-needed reinforcements into areas of the economy where the government’s efforts need to be considerably strengthened. Second, the government is increasing its level of focus on improving indigenous pharmaceutical manufacturing capacity by bringing the Ministries of Health and Chemicals under the same minister. This aligns with the government’s realization that the health and pharma sectors in India need to be far better equipped and less dependent on international supplies. Third, the reshuffle could presage a deeper bureaucratic overhaul, following up on past campaign promises around improving governance at all levels.

Effort to change the narrative: The reshuffle has emerged against the backdrop of rising criticism of the government’s management of the pandemic and other issues. The resignation of the Cabinet minister and Minister of State (MoS) of the Health Ministry indicates the government’s intention to alter the narrative around its Covid-19 response. The replacement of the labor minister also points towards an effort to allay criticism that the government received due to the migrant crisis of 2020 and the fallout of the farmer’s bill. The replacement of Ravi Shankar Prasad and Prakash Javadekar similarly suggests that there were concerns within the government about the failure to control the public messaging arising from the IT Rules, 2021, which has resulted in considerable public and international criticism. Three new MoS have also been added to the Ministry of External Affairs in recognition of the importance of greater global coordination in a pandemic-stricken world.

Strong pivotal role of the PMO: The inclusion of new names in the Cabinet, sidestepping several veteran politicians, would not have been possible under most other prime ministers in India. This “The reshuffle has emerged against the backdrop of rising criticism of the government’s management of the pandemic and other issues.”July 9, 2021 Albright Stonebridge Group | 3 Cabinet reshuffle has gone against the norm, replacing several strong, seasoned political leaders with fresh, relatively younger faces with robust educational backgrounds, including a selection of current and prospective allies, individuals from across different parts of the country, and from across social castes. While poor performance and widescale public criticism is believed to have been a reason behind the exit of several ministers, it remains to be seen if these officials reemerge in important election-facing roles in the key states that are headed to the polls.

Eye on the upcoming state elections: The reshuffle also comes ahead of upcoming critical state elections and could be a reflection of the BJP’s disappointing performance in recent elections in West Bengal, even after pulling out all stops. The elections in Uttar Pradesh and Punjab (both in early 2022), Gujarat (in December 2022), and Karnataka (in or before May 2023), are expected to provide an early indication of PM Modi and the BJP’s prospects in the general elections in 2024. The inclusion of several politicians from marginalized communities (possibly in order to counter criticism related to the Farmers’ Protests) and higher representation from the northeastern states and Punjab likely reflect the importance of these upcoming contests.

Who is in the new Cabinet?

The table below highlights key politicians sworn in on July 7.