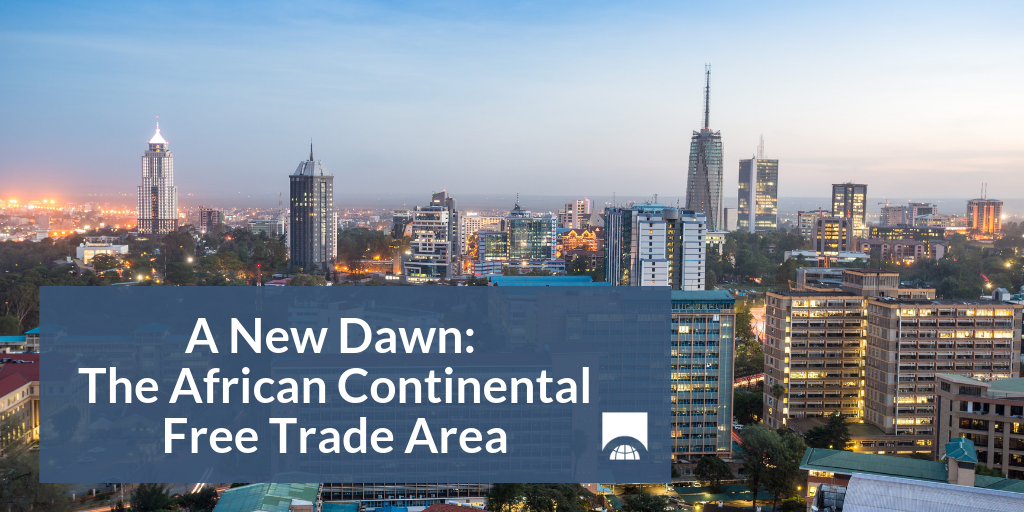 “An African Solution to an African Problem”

The AfCFTA will form a customs union with the goal of promoting intra-continental business, foreign direct investment, and access to foreign markets, as well as economies of scale. Signatories agree to remove 90 percent of tariffs and other trade barriers on goods traded with other African countries. The agreement will gradually cut tariffs at a rate of 10 percent annually for developed countries and five percent yearly for the others. The AfCFTA is expected to create uniform regulation to cover multi-sectoral trade: goods, services, competition, investment, and intellectual property rights. Ongoing negotiations will determine regulatory frameworks for each of these sectors, which would work in concert with existing domestic trade frameworks.

If implemented properly, the AfCFTA could be the single largest driver of economic growth and poverty reduction than any other factor in recent history. An integrated African market will unlock opportunities to be part of global value chains that the relatively small size of many individual African markets currently precludes. By creating one large single market, the AfCFTA has the potential to exponentially grow the manufacturing sector, which already represents about 10 percent of the continent’s GDP. Many experts believe expanded, value-added manufacturing will create desperately-needed jobs, especially for women and youth, and will be key to Africa’s long-term growth.

Heads of state across Africa have demonstrated an extraordinary commitment to the AfCFTA, which was realized with remarkable speed. Unlike other free trade agreements on the continent, this agreement enjoys a rare level of buy-in from leaders of large economies – including Ethiopia, Egypt, and South Africa – as well as leaders from smaller economies, such as Ghana, Rwanda, and Uganda. While Africa’s largest economy, Nigeria, has yet to sign on, its Minister of Industry, Trade, and Investment recently indicated the country will come on board soon. Analysts expect the economic powerhouse will join before the 2020 African Union Summit given the intense criticism President Buhari faced for his resistance to signing.

Distinct from the African Union, the AfCFTA’s dispute resolution mechanism will provide an outlet for businesses and governments to negotiate challenges as they arise. The process will include a dispute settlement body made up of an independent, international panel with three autonomously operating experts. This independence would differentiate it from other such regional mechanisms that are often subject to overt or subtle political interference. Similar to the World Trade Organization (WTO), the AfCFTA’s dispute resolution mechanism disincentivizes trade wars and encourages member states to reduce trade barriers and promote free trade.

While the AfCFTA’s ratification is a monumental occurrence that deserves to be celebrated, challenges and uncertainty remain. How each of the 55 unique signatory states ultimately implement the AfCFTA will be the real measure of whether the agreement works. While the parliaments of 24 countries have already approved the AfCFTA, domestic trade policies that emphasize protectionism as well as complicated legislative processes could make it difficult to implement the agreement parallel to existing regulation. In addition, the deal is still an evolving framework that will take clearer shape as negotiations evolve. Some negotiators involved predict that it might take three years before the AfCFTA reaches its final form and the agreement is likely to be unevenly implemented given the varying levels of economic development across the continent. Thus far, there has been limited engagement with the private sector, but as domestic policies begin to shift in accordance with the AfCFTA it will be critical that the private sector has access to this information in real time and in an accurate and reliable manner.

Further, the factors that have contributed to the current low level of intra-Africa trade, including the logistical complications of underdeveloped infrastructure and inconsistent energy access across the continent, remain and will represent some of the biggest challenges to the implementation of the AfCFTA. Nevertheless, supporters believe that the overwhelming political will to push forward a reputable AfCFTA could be enough to overcome these hurdles.

What Does the AfCFTA Mean to Foreign Investors?

The AfCTA's removal of trade and non-trade barriers will benefit African businesses and foreign investors alike by lowering the cost of doing business on the continent, putting uniform standards in place, and creating a single market of goods and consumers.

Foreign companies that have shied away from the continent simply due to the fragmentated nature of its economies will no longer have that excuse. The AfCFTA will not only allow investors access to an integrated trade block but is also expected to improve the conditions on the ground for the implementation of large-scale investment projects spanning multiple countries. In fact, the AfCFTA’s rollout represents an early opportunity for investors to help develop the significant infrastructure that will be needed to link African markets more efficiently to realize the agreement’s full potential.

As the AfCFTA seeks to introduce an overarching set of rules to govern the immense trade area, it will provide the international business community with the predictability needed to chart out growth patterns across the continent and make long-term investments. The prospects of investors with such a forward-thinking strategic approach will be boosted by the pairing of the AfCFTA’s intended effect with Africa’s bulging demographic growth. Investors can expect access to a growing consumer market that will include a middle class projected to expand from 245 million to 380 million over the next five years.

African Ministers of Trade will meet in early June to prepare for the operational phase of the agreement by harmonizing their approach to issues such as tariff reductions, non-tariff barriers, and digital payments. This meeting will include important negotiations on topics vital to foreign investors such as preferential rules of origins for products traded to African markets. The AfCFTA’s operational phase is expected to be finalized during the July 2019 Extraordinary Summit of the AU Heads of State and Government in Niamey, Niger. Negotiators have indicated they welcome  private sector input on the agreement’s frameworks and protocols during the AfCFTA Business Forum on the margins of the July AU Extraordinary Summit, though little information has been revealed. Once details about the forum are released, the international business community should seize this rare opportunity to engage with AfCFTA negotiators early enough to gain information on evolving trade regulations and advocate for global best practices to be incorporated into the frameworks currently being drafted.