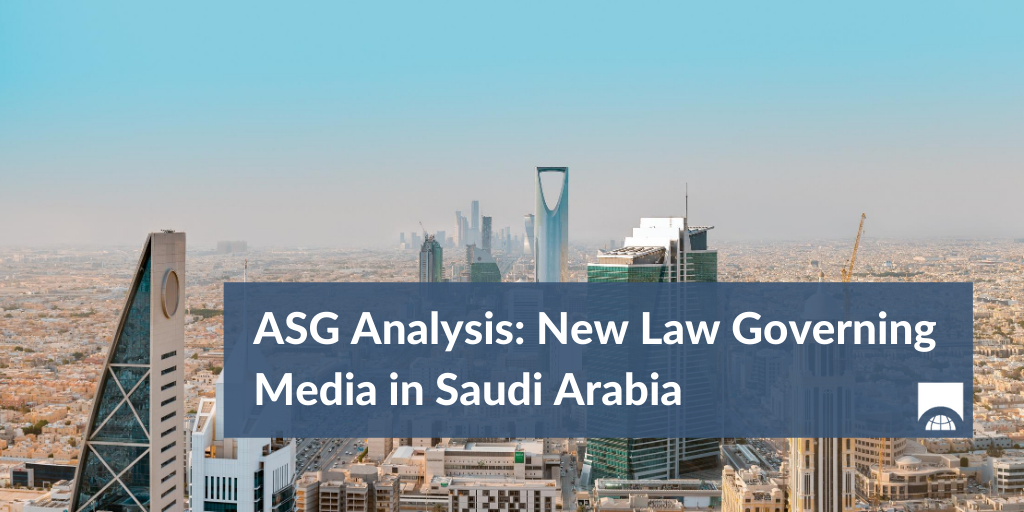 Provisions of the New Regulation

The new draft law would replace two existing laws governing traditional media: the Audiovisual Media Law, which regulates radio and television and is enforced by GCAM; and the Printing and Publication Law, which regulates print media and is enforced by the Ministry of Media. The law would also extend to online media and digital advertising, filling a gap in existing regulations, especially with regard to social media. All media, including social media, would fall under the regulatory oversight of GCAM, which reports to the Minister of Media. GCAM may be rebranded as the General Authority for Media Regulation, or something similar, to reflect its new role.

Below is a summary of the key provisions that would apply to all media—traditional and online—under the new law:

Once public consultation has closed and GCAM has made any revisions to the law, it will go to the Council of Ministers for final approval. After the Council of Ministers approves the law, GCAM will have 90 days to issue the implementing regulation, which will set out the licensing process, fees, content restrictions, enforcement mechanisms, penalties, and other provisions in greater detail. GCAM will have authority to draft the implementing regulations, subject only to the approval of the Minister of Media.

The stated goals of the law are to organize the media sector, protect religious, cultural, and social values, monitor media content to ensure that it is in line with Saudi law and policy, and provide a positive climate for investment. Of these, monitoring media content – especially social media – appears to be the most immediate goal. The law is consistent with the approach that the Saudi government has taken of policing social media use, but not restricting it outright. While sensitive to the role that social media has played in recent popular uprisings such as the 2011-2012 Arab Spring, the government seems to recognize that it cannot curb social media entirely and that social media platforms can be effective means to communicate with the public. Government ministries and individual officials now routinely use social media to make announcements, and public opinion as expressed on social media in turn appears to at times influence government policy.

The new law comes on the heels of major structural and leadership changes in the media space. In recent months, GCAM, whose mandate was originally limited to audiovisual media, has taken over from the Communications and Information Technology Commission (CITC) as the primary authority regulating all media, including social media, and some areas of data policy. This law would complete the migration of media policy to GCAM. Another recent change was the appointment in February of Minister of Commerce Majid Al-Qasabi as Acting Minister of Media and Chairman of GCAM. A veteran senior official close to the Royal Court, Al-Qasabi has been brought in before to drive major changes at other government agencies. His appointment suggests that Saudi leadership may have a similar shakeup in mind for the media sector.

Beyond the policy context, the new media law is also consistent with the national pivot toward austerity. In May, the Kingdom announced austerity measures totaling SAR 100 billion ($26.6 billion), or roughly 10% of the original FY2020 budget, in the form of both spending cuts and revenue increases. The fees attached to the license that every media company would have to obtain are consistent with the broader push to increase non-oil government revenues, a central pillar of Vision 2030 that has been lent new urgency by the pandemic-related collapse in global oil prices.

It is too early to tell whether the new law will result in greater government censorship of media in the Kingdom. The list of prohibited media content under the new law is not meaningfully different from the list of activities already prohibited under Saudi law, which could suggest a degree of continuity. However, the law will increase the compliance burden for media companies operating in the Kingdom, at least in the near-term. While the details of the licensing process will not become clear until the implementing regulation is issued, companies should anticipate and prepare for potential hurdles. On the flip side, the law also states a desire to attract foreign investment to the Saudi media sector, which suggests longer-term opportunities for major foreign brands operating in the Kingdom.

To mitigate the risks associated with the new law, companies should proactively engage with GCAM, which has led the development of the law and will be responsible for its eventual implementation. As in engagement with other government entities, we advise building a broad set of relationships within GCAM, including senior leadership as well as working level officials who will likely be the day-to-day points of contact on specific regulatory issues.