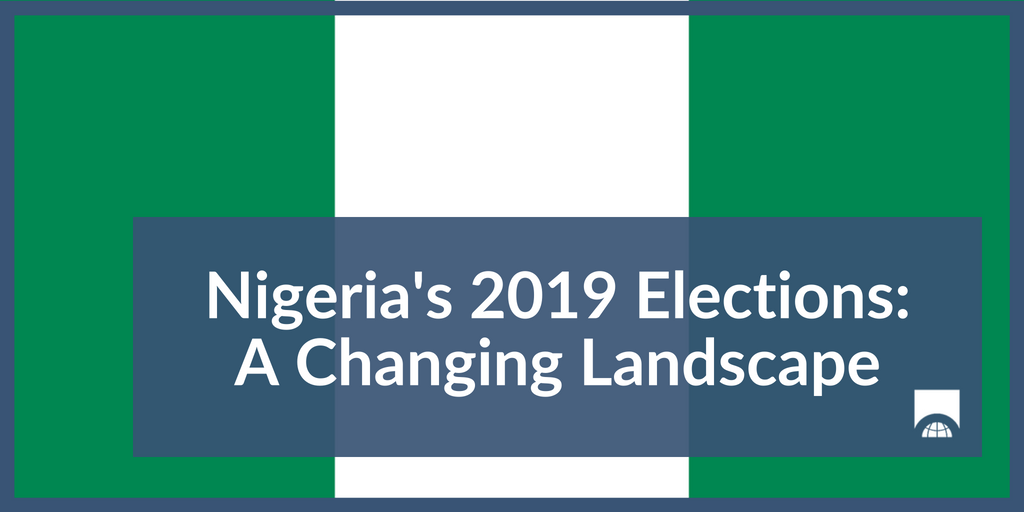 Cracks within the APC are beginning to show. On July 24, now known as “Mass Defection Day,” 15 senators defected from the ruling party. Senate President Bukola Saraki also defected a week later, weakening the APC’s majority in the National Assembly. There is speculation that the Speaker of the House of Representatives, Yakubu Dogara, will be the next major legislator to join the PDP, although any decision by Dogara may largely depend on other shifts in the balance of power in the House. At the local level, key actors, including the governors of Sokoto and Kwara states, have also left the APC for the PDP.

This is a familiar pattern in Nigeria; in fact, many of those defecting from the APC had previously left the PDP to join the APC during the 2015 campaign cycle. Now, the PDP, as the former ruling party and only viable opposition to the APC in 2019, is welcoming back its former members. Political insiders suggest that there will be more defections in the coming months, especially if key actors continue to feel left out of the APC’s internal decision-making processes.

To recreate its success of 2015, the APC will need to stem the tide of defections and attract new leaders from the PDP. Since the defections began, party leaders, including President Buhari, have met with aggrieved party members to hear their complaints. In the meantime, the PDP is seeking to consolidate its recent gains and fully integrate those who have returned to the party. Before the current wave of defections, the PDP formed the Coalition of United Political Parties (CUPP) with 39 other parties, including a splinter group from the APC, the Reformed-APC (R-APC). CUPP will support the PDP’s presidential candidate, but it is yet unclear whether this alliance will be as consequential as the APC coalition in 2015.

President Buhari continues to benefit from strong support in the northern and southwestern regions, despite criticism that his administration has struggled to deliver on anticorruption and the economy. Although his support in the Middle Belt has diminished because of his handling of the farmer-herdsmen crisis, Buhari maintains the full support of the APC party establishment and is set to emerge from the upcoming APC convention in October as the party’s candidate. However, there is much speculation about the president’s health. Last summer, he spent 103 days in London receiving treatment for an undisclosed illness. Earlier this month, he spent another ten days in London on vacation, with Acting President Yemi Osinbajo running the country in his absence, which renewed speculation about the state of Buhari’s health. Should health complications prevent him from running, Kaduna State Governor Nasir El Rufai might be a strong favorite to step in as the party’s candidate.

With President Buhari expected to be the APC’s flagbearer in next year’s polls, presidential hopefuls are focused on positioning themselves to clinch the PDP’s nomination. Former Vice President Atiku Abubakar defected from the APC last year and remains the frontrunner, though he is likely to face very stiff competition from other formidable northern candidates, many of whom also recently switched political affiliations teams. This includes Rabiu Kwankwaso (former governor of Kano State and current senator), Aminu Tambuwal (Sokoto State governor and former Speaker of the House of Representatives), and Senate President Bukola Saraki, who defected to the PDP two weeks ago and is now the party’s National Leader, given his role as its highest-ranking member in government. Saraki has the support of many within the current legislature and several former governors whom he led as Chairman of the Nigerian Governor’s Forum between 2007 and 2011. In recent months, he has been traveling around the country and internationally, seemingly in campaign mode, and hinting that he plans to throw his hat in the ring. However, analysts wonder if his candidacy will be considered “northern enough” by establishment actors to counter President Buhari’s strong base in the region, as Saraki is from Kwara State in Nigeria’s Middle Belt and has deep cultural ties to the southwest. There are several other PDP members vying to be the party’s nominee, including Ibrahim Dankwambo (Gombe State governor and former Accountant General of the Federation) and Ahmed Makarfi (former Kaduna State governor and immediate-past PDP Chairman).

Several third-party candidates have emerged in the run-up to the elections, although it appears that these actors are more likely to be spoilers than winners. Former Cross River State governor Donald Duke has declared his intention to run as an independent, while former Deputy Governor of the Central Bank of Nigeria and current Tufts University professor Kingsley Moghalu has run a campaign modeled on French President Emmanuel Macron’s En Marche movement. Though substantive, his campaign has struggled to gain traction.

Rising tension between the presidency and the National Assembly

Political maneuvering is back to levels unseen since the 1999 transition to democracy, as actors within the government are keen to hold on to power while those who lost out in 2015 are doing all they can to wrest control back. This portends an unusually bitter battle for the presidency and party seats in the upcoming elections.

Last week, Senate President Saraki held a “World Press Conference” in which he mentioned that there was a “government within a government” seeking to undermine the legislature and plotting to impeach him. This came a day after the Department of Security Services (DSS) unilaterally blocked several legislators from accessing the National Assembly. The DSS’ unilateral action led to the sacking of the agency’s Director General, Lawal Daura, by Acting President Osinbajo - although some believe Daura was acting on orders from within the presidency. The rising tension and political back-and-forth between the presidency and the leadership of the National Assembly is the most visible example of Nigeria’s charged political space.

However, it is not entirely new. In 2015, Senate President Saraki and Speaker of the House of Representatives, Yakubu Dogara, – both PDP transplants to the APC – obtained their leadership roles in Senate against the wishes of the APC establishment by forming cross-party coalitions within the National Assembly. Under Saraki and Dogara’s leadership, the National Assembly has adopted its own agenda and been very critical of the presidency’s shortcomings, especially in reviving Nigeria’s stalled economy and improving security. Both the Senate and the executive branch have consistently used their constitutional powers to hedge against the other, with the legislature significantly altering budgets proposed by the presidency, for example, while President Buhari has vetoed key legislative proposals.

Issues likely to shape the elections coming into focus

Despite his mixed record, President Buhari is likely to run on a platform of continuity that lauds gains made in security, economic management, and governance. In contrast, the opposition can be expected to attack Buhari on the very same record, pointing to the fact that limited macroeconomic gains are not felt by the average Nigerian and charging that Buhari’s war on corruption has been selective, or even political in nature. The Middle Belt farmer-herdsmen crisis is likely to dominate the agenda. Many perceive the Buhari administration to have poorly handled the challenge, and analysts say it is conceivable Buhari could lose the crucial support he enjoyed in Benue, Plateau, and Taraba, the states most acutely affected by the ongoing conflict.

According to Nigeria’s constitution, President Buhari and the APC will need to win a majority of the votes cast and 25 percent of the vote in two-thirds of the 36 states (Buhari managed to do so in 26 states in 2015). In 2015, winning above 25 percent of the vote in Plateau and Taraba States, and a surprise win in Benue, were crucial to Buhari clinching the election. Those same states remain critical in 2019, but turning out similar levels of support for the APC may be difficult due to Buhari’s perceived lethargy in responding to growing insecurity in the region. Recent defections may also weaken the APC in key northern states of Kwara, Sokoto, and Kano. While Buhari is still in the driver’s seat, alliances are shifting. Nigeria’s 2019 elections might not produce an outright winner due to the Buhari’s increasingly localized popularity and high constitutional thresholds for victory.

Implications for Investors in Nigeria

Government attention and resources may be diverted towards the campaign trail. Historically, election season has often brought about a decline in activity at government agencies and parastatals, as key principals return home to campaign. Many investors expect little to get done between now and February, though technocrats within the government could remain committed to governing.

Government will be eager to point to projects that demonstrate successes, while the opposition will be quick to call out failures. As elections approach, the government will be increasingly focused on unveiling “tangible” projects and potential successes, mainly through infrastructural and social investments. President Buhari has called 2018 the “Year of Infrastructure,” and the 2018 capital budget is the largest in Nigeria’s history. Renewed attention to project implementation could provide opportunities for some investors or renewed traction on projects for firms already working with the government. As always, investors should be aware that government projects and partnerships run the risk of being politicized, by both the current administration and the growing opposition.