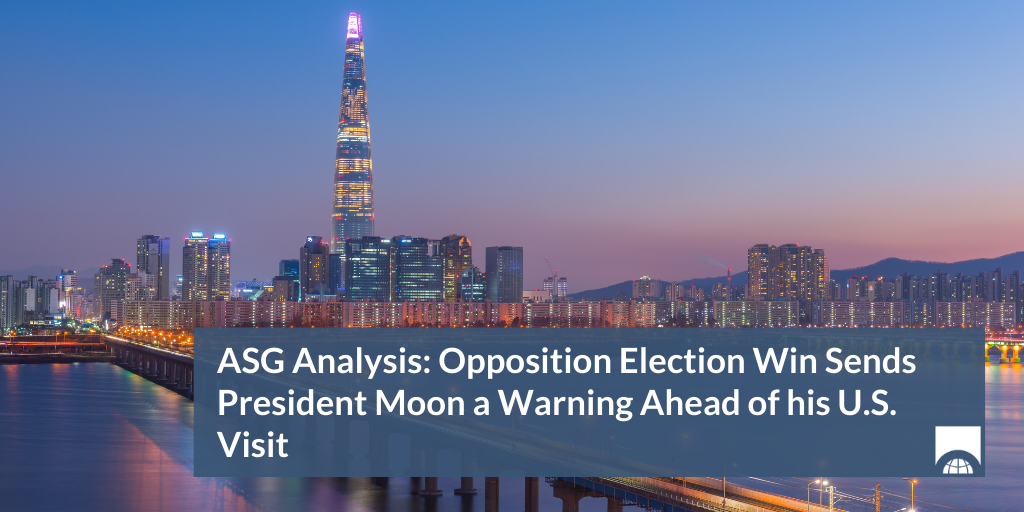 Conservative candidate Oh Se-hoon (PPP) won a resounding victory on April 7, 2021 to serve as Seoul’s mayor in a by-election triggered by the death of three-term mayor Park Won-Soon (DPK). Oh won the election with 57.5 percent of the popular vote compared to the 39.18 percent garnered by his opponent, former Minister of Startups and SMEs Park Young-sun (DPK). Voter turnout for the by-election, 58.2 percent, was a historic high.

Due to Seoul’s size (the city contains approximately one fifth of the national population) and political battleground status, the by-election serves as a political barometer going into the March 2022 presidential election; the DPK’s loss suggests that it will face significant headwinds. The PPP characterized the election as a referendum on President Moon Jae-in’s presidency by encouraging voters to use the election to “punish” his administration for alleged policy failures and personnel scandals.

While the PPP also won a mayoral by-election in Busan, Korea’s second largest city, this was not a surprise given the city’s historically conservative-leaning electorate. The by-election was triggered after former mayor Oh Keo-don (DPK) resigned in April 2020 following allegations that he sexually harassed aides. Oh was the first DPK candidate to be elected as Busan’s mayor since the introduction of direct mayoral elections in 1995.

Moon made housing affordability a key pillar of his campaign, but he has not been able to deliver. The relative cost of housing in Seoul has consistently risen since Moon’s inauguration in May 2017. The divergence of housing prices in Seoul as compared with the rest of the country is shown by the Korea Housing Affordability Index, which measures “[t]he loan repayment burden for a median income family purchasing a median-priced home with a standard loan” (Figure 1). Surging prices in Seoul are the result of a persistent inability to expand housing supply to meet demand, relatively stagnant wages, and policies which have promoted building of more affordable housing units in satellite cities of Seoul rather than the central city.

Discontent related to Moon’s housing policies was compounded by a scandal involving state-owned land developer Korea Land & Housing Corporation (LH Corp.). On March 2, 2021, civic groups accused ten LH Corp. officials of using insider knowledge to profit on real estate speculation. According to the charges, LH Corp. officials purchased farmland in two Seoul satellite cities knowing that LH Corp. was set to develop the land for 70,000 housing units. Since the initial allegations, the investigation has grown to include twenty LH officials and the prosecution service is investigating members throughout the government and legislature, including in the Blue House.

Since the scandal broke, Moon’s approval ratings have plunged to an all-time low of 32 percent in a recent Gallup Korea survey. Forty percent of respondents expressing disapproval of Moon’s performance highlighted his mishandling of real estate policy as the primary reason. The fallout from the LH Corp. scandal hurt the DPK’s popularity while bolstering the popularity of the PPP, closing the approval ratings gap between the two parties (Figure 2).

Figure 2: Approval ratings of President Moon, the DPK, and the PPP

The circumstances surrounding former Mayor Park’s suspected suicide in July 2020 are also thought to have weighed on the DPK’s popularity going into the race. In July 2020, a former secretary made a complaint to the police accusing Mayor Park of sexually harassing her during Park’s tenure as Seoul mayor. The very next day, Park was declared missing and later found dead. While the police investigation was closed after Park’s death in accordance with Korean legal procedures, civil society groups continued to press both the police and Seoul City Hall to investigate the former secretary’s claims, which she previously raised with the city government.

In previous elections (see Figure 3), the DPK benefited from a fractured opposition stemming from the rise of new conservative parties and political personalities as well as continued fallout from the 2016 corruption scandal involving impeached president Park Geun-hye (PPP). Notably, the DPK won an upset plurality in the 2016 legislative election due to the surprise performance of a new centrist party, the People’s Party. Facing a splintered opposition, President Moon was able to win the 2017 presidential election despite not securing an outright majority due to the strong showing by People’s Party candidate Ahn Cheol-soo (see Figure 3).

Figure 3: Historic performance of DPK and PPP in elections

To avoid a repeat of this presidential election loss, the three opposition candidates for the Seoul mayoral election, Oh Se-hoon (PPP), Ahn Cheol-soo (People’s Party), and Keum Tae-seop (independent) announced in February 2021 that they would all support whichever candidate came in first in a winner-take-all opinion poll. On March 23, Oh won the opinion poll though the vote count was not disclosed due to election regulations. It is unclear whether opposition forces will again unify behind a single candidate in the March 2022 presidential election in light of higher political stakes. The DPK’s prospects of retaining the presidency could depend on whether it again faces a fragmented opposition.

The PPP’s electoral win ends a streak of DPK electoral victories since 2016 and exposes a chink in the DPK’s political armor going into the 2022 presidential election. The DPK won the past four elections (see Figure 4) with steadily growing margins, most recently securing a supermajority in the National Assembly in the 2020 legislative elections as voters rewarded the Moon administration for its effective early response to the pandemic.

Figure 4: Historic performance of DPK and PPP in elections

The DPK also saw its string of three Seoul mayoral election wins since 2011 come to an end, reversing the DPK’s steady gains in the capital city. The late mayor Park had himself ended eleven years of conservative control of Seoul’s mayorship and had won three terms. (see Figure 5).

President Moon is now at risk of entering a lame duck phase as he loses the confidence of the DPK. With his approval ratings at an all-time low and the presidential election scheduled to be held in March 2022, Moon faces the danger that he will be unable to implement key policy initiatives requiring legislative action despite the DPK’s supermajority in the National Assembly. Major large-scale initiatives the Moon administration unveiled earlier this year, including the Korean New Deal as well as the 2050 Carbon Neutral Strategy, still require legislative action, which could prove more difficult.

The DPK is beginning to distance themselves from the president, a trend which may accelerate as the party’s new leadership, to be installed later this year in May, will seek to further distance themselves from Moon going into the presidential election. The DPK’s national leadership team resigned en masse following the electoral loss. Furthermore, the DPK is expected to elect its nominee for president in September 2021, which will make it even more difficult for Moon to assert control over the ruling party. On April 20, Moon reshuffled his cabinet in response to growing criticism. Notably he replaced both the minister of science and ICT as well as the minister of trade, industry, and energy, in an effort to respond to the electorate’s dissatisfaction with the results of the administration’s economic policy.

President Moon will meet with President Biden during the second half of May, and will be under heavy domestic pressure to secure additional Covid-19 vaccine supply to accelerate Korea’s sluggish vaccination program. In a survey conducted by the Federation of Korean Industries ranking respondents’ desired outcomes from the upcoming summit, 31.2 percent highlighted “vaccine swap” as the most desirable outcome. The possibility of a vaccine swap between Korea and the U.S., where Korea would receive U.S. vaccines in the near-term in exchange for Korean-made vaccines in the future, was first raised by Foreign Minister Chung Ui-yong earlier this month. The U.S. government, which has received a barrage of similar requests from other countries, has not yet made any formal public response. The Moon-Biden meeting agenda will also feature a host of other challenging issues where the two governments may not be fully aligned. President Moon will likely press a skeptical Biden administration to consider near-term reengagement with North Korea, while President Biden will urge that South Korea work more closely with the United States and other partners to press China to address a wide range of security, human rights, technology, and economic concerns.

Opposition may struggle to unify ahead of the 2022 presidential election

While unity in the opposition camp was a key to its victory in Seoul, there is still a wide-open field of contenders to take on Moon in the presidential race. There is no clear leader within the opposition, although ASG sources indicate the former Prime Minister Chung Sye-kyun is viewed as the front-runner for the DPK’s nomination. No PPP candidate has been able to garner more than five percent support in opinion polls, highlighting the risk that multiple opposition candidates could split the vote and open a much easier path to another DPK victory.

Perhaps in response to these concerns, media reports indicate that the PPP is looking to recruit former Prosecutor General Yoon Seok-youl to participate in the PPP primary process. Yoon emerged as a popular non-political figure opposed to the policies of the Moon administration following his opposition to Moon’s highly controversial prosecutorial reform during his tenure as prosecutor general. In an April 2 Gallup Korea opinion poll surveying preferences for upcoming presidential election, Yoon was able to garner 23 percent support.

Beyond these concerns, the opposition camp must recognize that the mayoral races may reflect the electorate’s disapproval of the DPK more than increased support for the PPP. In a poll conducted in the aftermath of the Seoul mayoral election, 61 percent of those surveyed expressed the view that a decline in DPK support was the primary reason the PPP was able to win the election. In the same survey, 18 percent of survey respondents identified Park’s sexual harassment accusations as the primary reason. Comparatively, only three percent of survey respondents thought the PPP won due to their policies.

The election of a PPP candidate for the presidency in March 2022 could cause political gridlock as the DPK will retain a supermajority until elections in April 2024. When the conservative Grand National Party, a predecessor to the PPP, lost its legislative majority in 2016, then-President Park Geun-hye, a conservative, was largely seen as a lame duck and unable to pursue major policy initiatives for the remainder of her term, even before a corruption scandal led to her impeachment.

Leading up to the presidential election, organizations should diversify their stakeholder engagement and prepare for both outcomes

The results of the mayoral election, the disorganization of the opposition camp, and the rise of third-party candidates create a climate of political uncertainty leading up to the 2022 presidential election. In light of this more fragmented political environment and uncertain outlook, companies and other organizations should diversify their stakeholder engagement across the political spectrum and proactively prepare for a variety of potential outcomes in 2022, particularly: (1) divided government; and (2) unified DPK control.