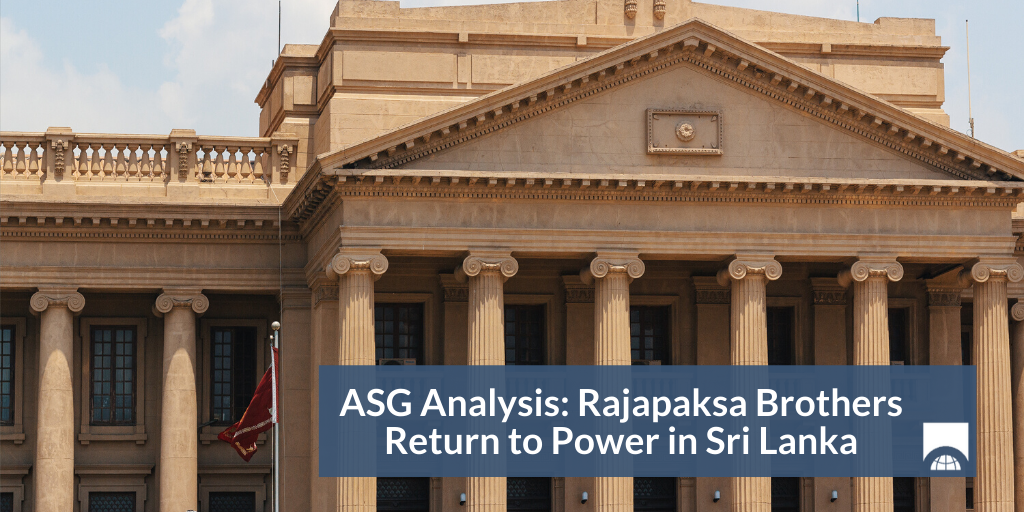 The Return of the Rajapaksas

Gotabaya was defense secretary during his brother’s administration, which oversaw the end of the decades-long Sri Lankan civil war in 2009. The end of the war led to allegations that the Rajapaksa brothers turned a blind eye to widespread human rights abuses, including civilian casualties, forced disappearances, and torture.  Gotabaya, however, has denied all the charges and announced that he will not honor Sri Lanka’s commitments to the United Nations Human Rights Council to pursue post-war accountability and reconciliation efforts.

Gotabaya’s victory is being viewed with concern by Sri Lanka’s Tamil and Muslim populations, who had largely supported the incumbent Premadasa. Since winning the election, however, Gotabaya has attempted to alleviate their fears, calling for unity in an increasingly divided nation during his swearing-in ceremony. During his speech, Gotabaya said that "it is [his] duty to serve all Sri Lankans without racial or religious discrimination," while acknowledging that “it was the Sinhala majority vote that allowed [him] to win the presidency.”

His personal reputation, both at home and abroad, makes unifying the nation a daunting challenge for Gotabaya. This is further compounded by the growth in anti-Muslim rhetoric across Sri Lanka following the Easter Sunday terrorist attacks on April 21, 2019. Gotabaya, however, is perceived by many Sri Lankans as best positioned to tackle the country’s national security challenges. He plans to rebuild the security institutions in the country and has been vocal in his criticism of the previous government’s mishandling of intelligence reports that warned about the April terrorist attacks.

Following Gotabaya’s victory, the Sri Lankan prime minister and his cabinet resigned, allowing Gotabaya to appoint his brother Mahinda as prime minister. Mahinda will also assume the responsibilities of finance minister, a critical post given that the country is currently under an IMF program.

Parliamentary elections are currently expected to be held in April 2020, which means that the country will face political uncertainty over the next few months. However, Prime Minister Ranil Wickremesinghe’s resignation and Mahinda’s appointment as the new prime minister should allow the new administration to govern relatively effectively until the elections take place.

There are fears that Gotabaya’s election will result in an even closer relationship between Sri Lanka and China, a scenario that is of great concern to the U.S., Japan, and India. During the previous Rajapaksa administration, when Mahinda was president, China invested billions of dollars in infrastructure and development projects across the island. This led to increased indebtedness to China and fears of a debt trap; China currently owns about a quarter of Sri Lanka’s $34 billion foreign debt.

China’s investments have been controversial, particularly after Sri Lanka was forced to hand over control of the Hambantota Port on a 99-year lease in a debt-for-equity deal with Beijing in 2017. Since then, Sri Lanka has sought to balance its relationships, with the Premadasa administration moving closer to India.

While Gotabaya has said he plans to "restore relations" with China, several factors render a full return to Mahinda-level relations unlikely. First, Mahinda’s excessive dependency on China likely cost him the 2015 election and resulted in the loss of the Hambantota Port. Second, Sri Lanka’s troubling financial situation and struggles to repay Chinese debts may give Chinese officials some pause before pouring in new investments. Third, Gotabaya recognizes that his near-term priority is the economy, and he may be cautious about alienating the U.S., given that Sri Lanka needs support from the International Monetary Fund (IMF) and financial assistance from non-Chinese sources to meet its external financial obligations. Given this backdrop, Gotabaya may first try to engage countries like India and the U.S. before China, and he is likely to take a more balanced approach in terms of Sri Lanka’s relationship with China.

Gotabaya has already signaled that he will pursue a more neutral foreign policy, and his first overseas visit will be to India on November 29. In an interview ahead of the trip, Gotabaya said that Sri Lanka will work with “India as a friendly country and won't do anything that will harm India's interests.” He went on to say that Sri Lanka does not want to “get in between the power struggles of superpowers,” and that his country cannot “engage in any activity which will threaten the security of India.”

Parliamentary elections are expected to be held in April 2020, until which time Mahinda will serve as prime minister. As elections draw near, Sri Lanka may experience increased political uncertainty as neither Wickremesinghe’s United National Party nor Mahinda Rajapaksa’s SLPP currently has an absolute majority in parliament necessary to form a government. While parliament can also choose to dissolve itself at any point with a two-third majority vote, this is unlikely to happen given that the UNP majority will want to wait for dissolution given their poor election performance.

Gotabaya is inheriting an economy that has slowed to a growth rate of 1.6 percent and has a foreign debt of $34.4 billion, or 83 percent of GDP. During his campaign, Gotabaya promised to cut the 15 percent value-added tax in half in order to reignite consumption and growth. The IMF’s approval for the release of a sixth tranche of a $1.5 billion loan program will ease economic concerns for the time being, but a slowing economy, which is still reeling from the negative impact of the Easter Sunday attacks on the country’s tourism sector, will be a key challenge for the new administration.

With Mahinda taking over the finance ministry, it is likely that the Rajapaksas will focus their attention on reviving economic growth.  The country’s central bank head, an ethnic Tamil, announced he will step down from his post on December 20, and the appointment of a new central bank head will be closely watched by international investors.

Gotabaya has indicated a desire to attract investment from non-Chinese sources and his administration is likely to work to accommodate investors from countries such as the U.S., Japan, India, and Australia. The new president was vocal about investment from non-Chinese sources in a recent interview, inviting investors from “India, Singapore, Japan and Australia to come and invest” in Sri Lanka and promising he would not “allow only China to invest” in the country.