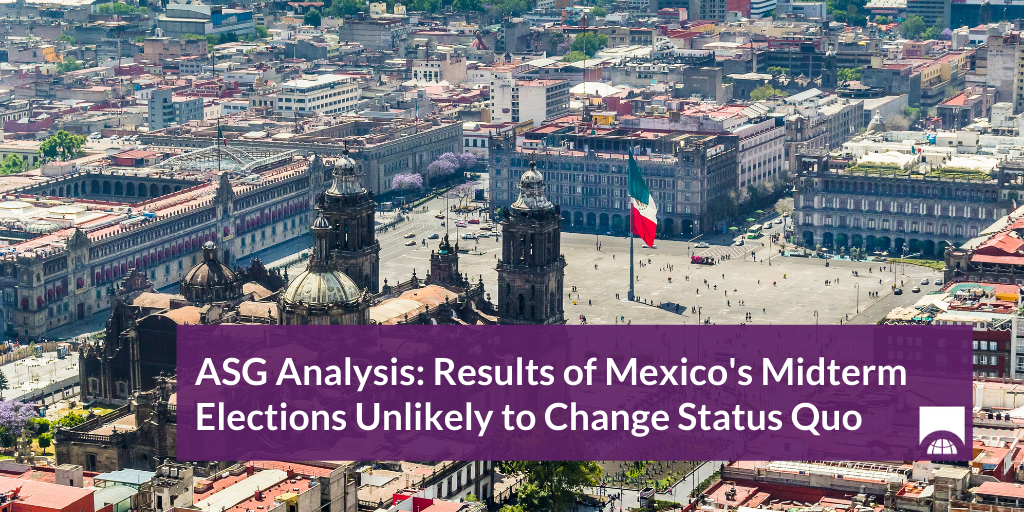 On June 6, Mexico held the largest elections in its history. On the ballot were: all 500 seats of the Federal Chamber of Deputies, 15 governorships, 30 out of 32 state congresses, and over 18,000 positions in almost 2,000 municipalities, including mayors and council members. Votes are still being tallied and it will take several weeks to finalize the count. Nonetheless, incoming results point to a continuity of the political dynamics that preceded the election.

The results represent only a minor setback for President Andres Manuel López Obrador (AMLO), who saw his popularity slip particularly among middle class voters. His party, Morena, lost 59 seats, and his coalition failed to reach a supermajority needed to making sweeping constitutional reforms. However, his coalition still holds a simple majority of 279 seats in the new Lower House, allowing it to continue to enact the president’s legislative agenda.

At the local level, Morena largely secured its power. The party and its coalition won 11 of 15 governorships and will now control 18 of Mexico’s 32 states – an increase from the six states it controlled previously. Notably, Morena lost the governorship in Nuevo Leon, which houses most of Mexico’s industry and is one of the most powerful states in the country.

Companies operating in Mexico can expect the operating environment to remain challenging. ASG expects AMLO to continue to pursue his policy priorities, including the development of the Mayan Train, the Dos Bocas refinery in Tabasco, the Felipe Angeles Airport in the State of Mexico. We also expect him to continue to occasionally use public referenda to decide the fate of investment projects; pursue his nationalistic energy strategy and discriminate against renewable energy companies; and weaken or eliminate key regulatory bodies.