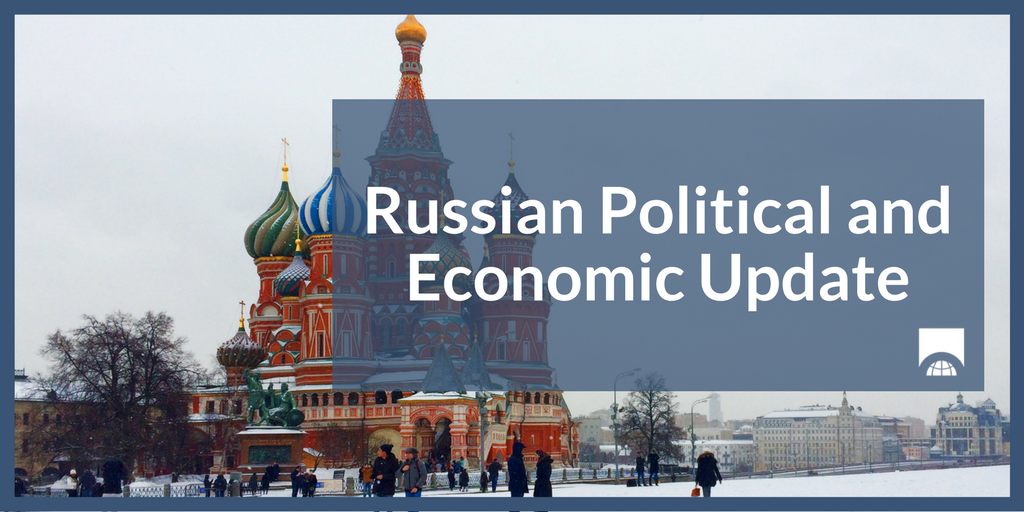 The current political climate in Russia is largely dominated by issues very close to home that have attracted only modest attention from foreign audiences. Putin’s plan for a relaxed honeymoon after the carefully stage-managed March 2018 presidential elections never got off the ground. Instead, the Kremlin has been dealing with fallout from a deadly fire in a shopping mall in a major Siberian regional city, a wave of spontaneous protests near Moscow due to dangerous conditions from a local garbage dump, and an outpouring of scorn from elite Russians over the government’s botched effort to ban the popular encrypted messenger app Telegram, which caused disruptions across the Russian internet.

Policymaking and normal government decision-making are largely on hold pending the formation of a new government that will follow Putin’s inauguration on May 7. The new team will be at pains at a late-May investor conference in St. Petersburg to insist that Russia remains open for business and seeks to attract foreign investment in the face of new unilateral U.S. sanctions.

The Kremlin takes threats to domestic stability extremely seriously and tends to blame them, publicly and privately, on the hidden hand of the West. In recent years (2012-2016), the Kremlin has chosen to respond to such threats via asymmetrical tools such as political subversion, election interference, covert funding of Western populist and political fringe groups, and propaganda to undermine the United States and other Western governments. This state of affairs is unlikely to subside any time soon.

Tensions with the West have mounted in the wake of a lurid assassination attempt on a former Russian spy in the UK, increased Western anger over Russian-backed cyberattacks and influence operations, continued military support for the Assad regime in Syria, and the unresolved war in Ukraine.

The Trump administration recently tried to refute political criticism that it is too soft on Russia by enacting a wave of new sanctions, largely aimed at individuals believed to be close to President Putin. In a break with past practice, the sanctions were not coordinated in advance with traditional allies and caused substantial disruption to global commodities markets thanks to the designation of Russia’s leading aluminum producer Rusal and its high-profile owner Oleg Deripaska. The U.S. Treasury Department is now seeking to dampen the impact on Western businesses who are entwined with Rusal.

The strategic purpose behind the sanctions was hard to discern. The list of designated foreign nationals included a broad swathe of figures, some of whom are not known for being terribly close to the Kremlin, which created uncertainty among the Russian elite that additional individuals or companies could be sanctioned at any time. President Donald Trump’s personal efforts to delay a second round of sanctions aimed at Russian entities supporting the Syrian regime has further muddied the waters.

The Russian parliament is currently considering counter-sanctions against the United States, but is facing pressure from Russian business interests which seek to protect lucrative arrangements with the West. The reality is that Russia has little economic leverage, which means that the most significant Russian pushback is likely to take other forms.

For now, the EU and its member states have shown no interest in matching the new U.S. sanctions due to internal divisions and mounting anti-U.S. sentiment on other matters.  A failure to address the divergence – the first significant one since sanctions were first imposed in 2014 -- might be a sign that the sides have stopped trying for parity, at least at the leadership level. Nevertheless, politically the U.S. may not want to get too far ahead of the EU with additional future sanctions, which could make more drastic steps unlikely absent coordination.

Russia’s tensions with the West are the dominant narrative in Russian foreign policy, and they are a cardinal element of President Putin’s strategy for strengthening his position at home. Putin uses international criticism to consolidate domestic support, denying wrongdoing and framing the allegations as a Russophobic conspiracy led by the United States to justify attacks against Russia. State control of the media and influence over online communications have helped Putin to push this message for the past four years. The current political environment has dramatically strengthened the hand of the security services. The FSB (Federal Security Service), the Investigation Committee, and the Prosecutor General’s Office actively participate in an ongoing redistribution of property and play an increasingly important role in setting the rules for political life. As new sanctions leave concerns over Russia’s reputation among international investors increasingly irrelevant, more groups of interests are using law enforcement agencies as a tool in attacking competitors or fighting for lucrative assets.

There is great uncertainty about how Putin plans to handle the fact that the Russian Constitution formally bars him from continuing as president after his new term expires in 2024. A slow-motion succession process is beginning, with Putin grooming a new generation of technocrats and security service veterans.  However, few expect that Putin can actually exit the scene without creating huge domestic instability, which suggests that he will look for ways to stay in charge à la the Grand Ayatollah in Iran or Singapore’s founding father, Lee Kuan Yew. The political opposition remains badly divided and largely ineffectual with the notable exception of anti-corruption campaigner Alexei Navalny.

The Russian economy has slowly recovered from a deep recession in 2015 caused by a sharp drop in oil prices. The trend growth outlook is expected to remain trapped in a modest 1.5-2 per cent range over the next two years based on International Monetary Fund estimates. Analysts believe significant structural reforms would be needed to increase growth beyond this level, but a combination of pressure from deeply entrenched vested interests, higher oil prices, and the Kremlin’s fears of any loosening of political control make it unlikely that the government will make significant changes to current policies. It is likely that after the formation of the new government following the May 7 inauguration, the Kremlin will announce a big package of new expenditures related to healthcare, education and infrastructure – estimates go up to 10 trillion rubles (~US$162 billion) for 2018-2024. Despite rising oil prices, the government doesn’t have a source of revenue to finance these ambitious plans, and thus is very likely to increase taxes. The cabinet is currently discussing changing the flat 13 percent salary tax to a larger progressive tax and introducing a new 4 percent sales tax.

The bottom line is that Putin and other senior government figures value domestic stability and protections against a hostile West over any structural reform blueprints. Russian economic activity is hampered by the lack of rule of law, a captive judicial system, endemic corruption, and the suffocating effects of expanded state control and monopolistic behavior. Government spending decisions over the past decade have demonstrated a profound preference for guns over butter. The Kremlin has provided huge budget largesse to well-connected insiders who have control over state-funded infrastructure projects and the like, which are magnets for corruption. In tough times, the government has used budget sequestering to diffuse the pain and delay expenditures while relying on currency weakness to shift the burden of painful macro adjustments to average consumers.

In general, the economy has less impact on domestic politics in Russia than in most countries. Most Russians are heavily dependent on the state and fear that rocking the boat could make things even worse.  The lack of any credible alternative to Putin prevents any bottom-up impetus for change, although most Russians give the state poor marks for day-to-day governance and its handling of basic services such as health care and education.