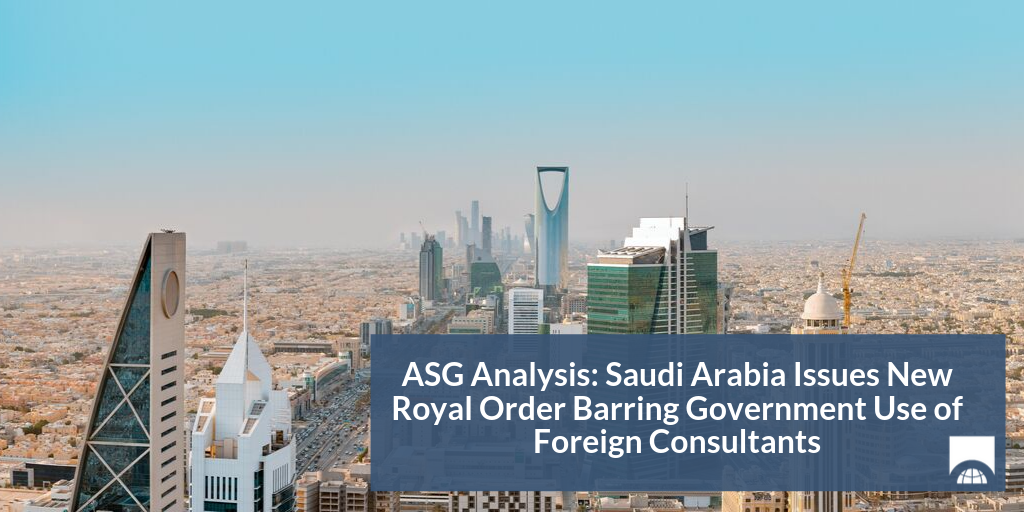 Last week, Saudi King Salman issued a Supreme Order in his capacity as Prime Minister that prohibits government departments and agencies from awarding contracts to foreign consulting firms, except in cases where there is no Saudi firm or research center capable of providing the required services. While the exact motives for the change are unclear, it would seem to be in line with wider efforts under Vision 2030 to nationalize the labor force and reduce reliance on foreign workers.

The Order could be an attempt by the government to address mounting criticism over its use of foreign consultants. However, the document itself refers to a letter issued a year ago by the President of the Control and Investigation Board, the body that investigates financial anomalies and corruption in government entities. The letter summarized the findings of a study of consulting contracts with the government and recommended ending the use of foreign consulting firms, citing growing local expertise. The General Secretariat of the Council of Ministers endorsed these recommendations. The Supreme Order is the final approval for that decision.

The document appears to leave considerable room for exceptions to be made, saying only that foreign consulting firms not be used when there is local expertise available. Moreover, the Order distinguishes only between “national” and “foreign” companies. It does not appear to distinguish between Saudi-owned companies and Saudi offices or subsidiaries of foreign-owned companies. Under Saudi law, any company that is legally registered in Saudi Arabia is considered to be a Saudi company, regardless of ownership.

Though it is too early to tell, it is unlikely in our view that the Order will impose a blanket ban on the use of foreign consulting firms. Valued at over $1.3 billion per year, the Saudi management consulting market is by far the largest in the Gulf and employs many Saudis. Ending the use of foreign consultancies entirely would be both difficult for government ministries to comply with and arguably inconsistent with Vision 2030 goals. At the very least, however, ministries will likely need to be more diligent in justifying their hiring of foreign companies.

Until the requirements of the Order become clearer, foreign companies operating in Saudi Arabia should closely monitor any changes in localization policy and focus on strengthening their relationships with important stakeholders in the Kingdom. Companies should also consider the steps they would need to take to comply with a ban on foreign consulting companies, which could involve establishing a local presence themselves or acquiring or partnering with local companies.