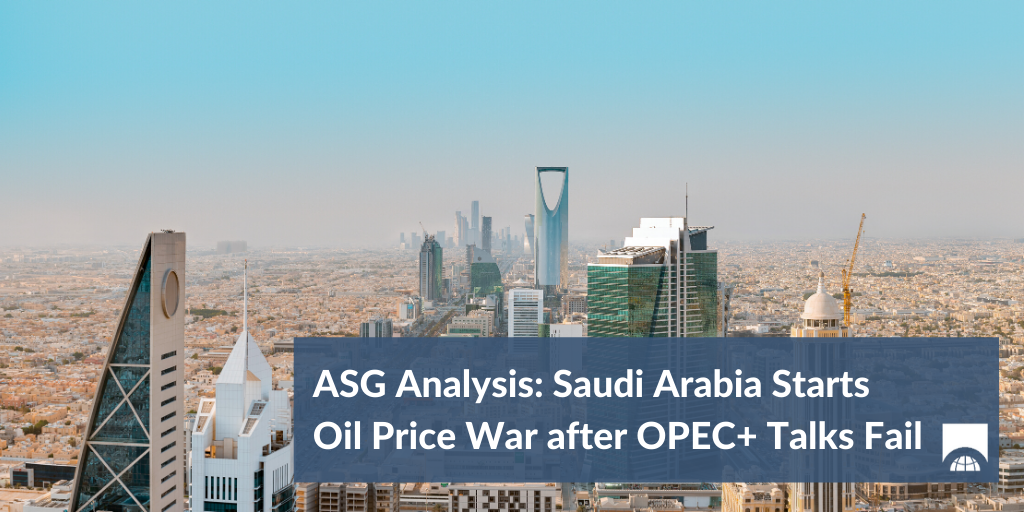 After the OPEC+ group of oil-exporting countries failed to agree to a deal on future oil output last week, Saudi Arabia and Russia have entered a price war that has sent global oil prices spiraling downwards. Ahead of the OPEC+ meeting on Friday, Saudi-led OPEC had sought to persuade its partners from outside the bloc, including Russia, to agree to jointly lower output by an additional 1.5 million barrels per day (bpd) in April in response to the global downturn in demand caused by COVID-19. Russia – which had only reluctantly agreed to the existing cuts – ultimately refused, prompting a breakdown in talks that will leave global oil producers without any deal in place once the current agreement to limit output expires at the end of March.

Saudi Arabia retaliated on Sunday, announcing measures to drastically lower the price of oil and compete for new customers, particularly targeting Russia’s top markets. With no limits on its production beginning April 1, Saudi state oil company Aramco announced plans to raise output to 12.3 million bpd – exceeding the Kingdom’s reported maximum sustained output capacity of 12 million. Furthermore, Aramco will offer discounts of up to $8 per barrel on April oil deliveries, with the largest discounts coming in northwest Europe, a key market for Russia. The dispute caused a more-than-20% drop in the price of Brent crude on Monday to approximately $36 per barrel and will likely damage, at least in the short term, the OPEC+ alliance and the Saudi-Russian alliance more broadly.

Both sides digging into positions

Saudi Arabia’s move to send oil prices plummeting – a reversal of course from its initial goal of stabilizing prices through an output cut – is at once intended to punish Russia with the hopes of forcing it back to the negotiating table and to assert the Kingdom’s continued status as the most influential power in the oil market. With a limit on output necessary to maintain acceptable prices for oil producers, Saudi Arabia’s plans to ratchet up output are a strong statement that it will not bear the brunt of production cuts while Russia, the world’s second-largest producer, produces near capacity. The Kingdom has made similar maneuvers in the past to remind global oil producers that they all suffer without output cuts – in 1986, unchecked Saudi production sent prices as low as $8 per barrel.

Russia stood firm in its position on Monday, claiming that it could endure prices between $25 and $30 per barrel for as long as six to 10 years.

However, Russia stood firm in its position on Monday, claiming that it could endure prices between $25 and $30 per barrel for as long as six to 10 years. Russia’s refusal to limit output appears to have been motivated by the opportunity to hurt U.S. shale producers and gain market share at their expense. This strategy was largely pushed by Igor Sechin, the CEO of state oil company Rosneft, who has argued to the Kremlin that Russia has an opportunity to better monetize existing hydrocarbon reserves, and that Rosneft would be able to increase crude significantly given the right conditions.

Personal dynamics may also have played a part in the breakdown of talks. Saudi Arabia’s move to escalate the standoff could signal a more assertive oil policy under new energy minister Prince Abdulaziz bin Salman. Since his appointment as Minister of Energy in September, Prince Abdulaziz has seen the Saudi energy sector through some of the most consequential developments in its history. The Kingdom’s ability to quickly restore production after Iranian missile strikes on oil processing facilities at Abqaiq and Khurais in early September, less than a week after Prince Abdulaziz was appointed, was viewed in Saudi Arabia and beyond as a significant achievement. The IPO of part of Aramco in December was another major undertaking. While the energy minister would not have made a decision of this magnitude without signoff from the Royal Court, the standoff shows that Prince Abdulaziz is willing to assert Saudi Arabia’s place as a leader of global oil production. Prince Abdulaziz also does not share the same personal working relationship with Russian Minister of Energy Alexander Novak as his predecessor Khalid Al-Falih did.

While it is difficult to predict how long the current standoff could last, the potential effects on the oil market and global economy could be severe. U.S. shale producers will feel the harshest effects from low prices due to higher extraction costs than conventional oil and more limited financing. Many of the producers have taken on significant debt and could be forced to quickly repay creditors if oil prices stay low, leading to a wave of bankruptcies. Even producers not in this position will see a sharp loss in revenue.

Saudi Arabia is likely to feel the impact more than Russia. Russia’s $570 billion in foreign currency reserves, along with its floating currency, offer it some degree of protection from low oil prices. Its current breakeven price – the price per barrel of oil at which it can balance its budget – is approximately $42 (and could go even lower with Russia’s new budget), compared to Saudi Arabia’s $83. The Kingdom remains highly dependent on oil prices for government revenue and is in the midst of a major social and economic reform program including several high-profile megaprojects with large government budgets. Shares in Aramco fell below its IPO price for the first time following news of the price war.

The next OPEC+ meeting is scheduled for June 9, and it remains possible that Saudi Arabia and Russia will reach a compromise agreement at that meeting or earlier.

The only winners could be consumers – though with the COVID-19 outbreak ongoing and travel restricted in many parts of the world, it is unclear that consumer demand will see a significant uptick.

The next OPEC+ meeting is scheduled for June 9, and it remains possible that Saudi Arabia and Russia will reach a compromise agreement at that meeting or earlier. Sources within the Russian government have predicted that the two countries’ energy ministries will continue to talk. In fact, former Saudi oil minister Khalid Al-Falih, who was recently appointed Minister of Investment, has reportedly launched a dialogue with the Russian oil minister with whom Al-Falih has a good relationship. However, the track records of both Saudi Crown Prince Mohammed bin Salman and Russian President Vladimir Putin indicate that neither will be eager to back down quickly in a public standoff.

Impact on companies operating in Saudi Arabia and Russia

In the short term, foreign companies operating in the Kingdom should prepare for reduced government spending, slower government payments to contractors (as was the case during the most recent oil price decline from 2014-2016), and an increased government appetite to raise revenues through taxes and fees. In procurement, bidders will likely see a return to emphasis on low prices rather than highest quality or commitments to localization.

Companies that view the Kingdom as a long-term market may earn good will from the government by demonstrating a commitment to remaining in Saudi Arabia while bracing for short-term impacts. Helping individual government partner agencies to overcome financing challenges will be an important gesture for Saudi counterparts. Additionally, the government will likely be increasingly interested in self-financing partnership arrangements.

If it becomes necessary for multinational firms to slow down operations inside the Kingdom or delay planned investments because of reduced government spending, it will be important to communicate clearly and effectively with Saudi stakeholders in advance to avoid negative longer-term consequences.

Investors in Russia will likely see fewer immediate impacts. The Kremlin has put a lot of emphasis over the last five years on fiscal discipline to build up reserves. Now that it has done so, it has made promises to significantly grow the economy in the next five years with a series of massive state-led investments in physical and digital infrastructure, healthcare, and education.

While there was reason to doubt this plan already, these developments make such an ambitious undertaking much less likely while prices remain low. Nevertheless, the Kremlin will likely continue to make funds available for favored projects and connected insiders, further underscoring the importance of navigating the market via alliances with reliable partners.

ASG will continue to closely monitor the impact of the oil price decline in Saudi Arabia and Russia and more broadly, including potential knock-on effects for the renewable energy sector and oil-dependent parts of the U.S. economy.

ASG has extensive experience helping clients navigate markets across the world. For questions or to arrange a follow-up conversation please contact Ben Gordon.