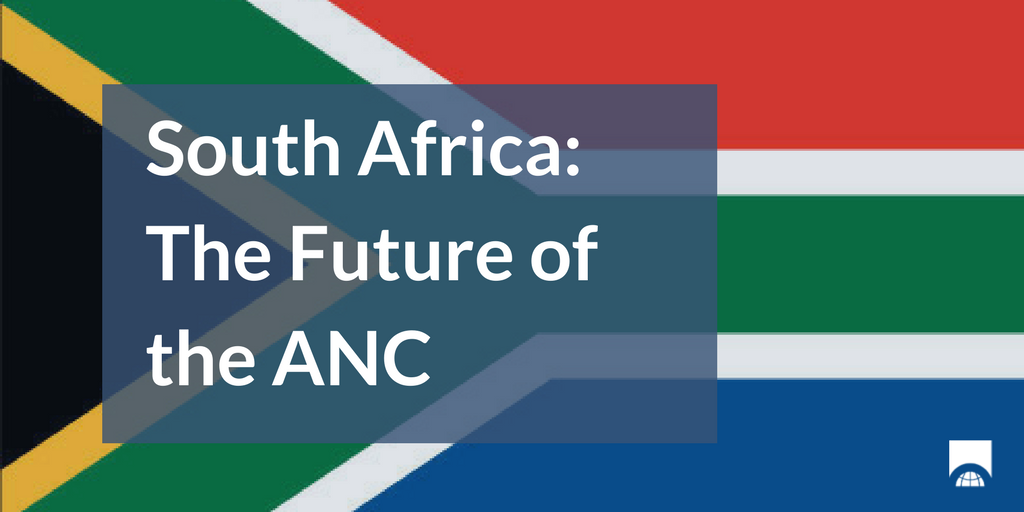 Overview of the ANC National Conference

From December 16 - 20, 2017, South Africa’s ruling African National Congress (ANC) Party will convene its 54th National Conference to elect the next cohort of leadership. Although significant attention has been focused on who will succeed Jacob Zuma as President of the ANC, the over 5,000 voting conference delegates will also elect other key party leadership positions – including the National Executive Committee (NEC), which will in turn elect the National Working Committee (NWC).

The NEC is the highest organ of the ANC outside the National Conference, representing the party’s decision-making and implementation authority. The highest leadership positions within the ANC, known as the National Officials (“Top Six”) of the NEC, include:

The NEC is comprised of approximately 100 people, including the Top Six, 80 members elected to five-year terms at the National Conference, and Provincial representatives. Immediately following the National Conference, the newly elected members of the NEC select the NWC, the body tasked with coordinating and executing the regular work of the party. The NWC is typically around 25 people, which includes the Top Six.

Who will succeed Jacob Zuma?

Despite the importance of the various ANC leadership positions chosen during the National Conference, all eyes are naturally fixed on who will succeed Zuma as party president and represent the face of the ANC in the period leading up to South Africa’s 2019 national election. The two current frontrunners are current Deputy President of the ANC and South Africa, Cyril Ramaphosa, and former Chairperson of the African Union Commission and former Minister of Home Affairs, Foreign Affairs, and Health, Dr. Nkosazana Dlamini-Zuma.

Ramaphosa has been campaigning on promises to revive South Africa’s ailing economy and combat corruption, while Dlamini-Zuma has focused on “radical economic transformation” and addressing poverty and issues of economic inequality. A successful businessman and negotiator, Ramaphosa is generally seen as more business-friendly and likely to be more open to Western investment than Dlamini-Zuma, who many assume will broadly push for greater economic transformation in favor of groups previously disadvantaged under apartheid. President Zuma has indicated that he would like Dlamini-Zuma to succeed him,[i] in the belief that she is more likely to maintain his policy thrust and protect him.

In addition to Ramaphosa and Dlamini-Zuma, current ANC Treasurer General Zweli Mkhize is also in the running to succeed Zuma as ANC President. Mkhize has been described as a potential “dark horse” for his ability to be a unity candidate that could appeal to both the Ramaphosa and Dlamini-Zuma camps. Other contenders for the party’s top spot include: Lindiwe Sisulu, Minister of Human Settlements; Baleka Mbete, current National Chairperson of the ANC and Speaker of Parliament; Mathews Phosa, former Treasurer General of the ANC; and Jeff Radebe, Minister in the Presidency.

Current media speculations indicate Ramaphosa and Dlamini-Zuma are neck and neck. However, the political dynamics within the ANC tend to shift quickly so it would be haphazard to assume a Ramaphosa or Dlamini-Zuma victory at this point.[ii] There are concerns that last-minute actions at the Conference could swing the vote in surprising fashion.[iii]

What happens to Zuma?

Although Zuma’s term as President of the ANC comes to an end this December, his term as President of South Africa does not end until 2019. Current polls, however, indicate that the ANC will struggle to obtain an outright majority in the 2019 national election if Zuma stays on as president of the country given his unpopularity. If Ramaphosa is elected ANC President this month, there is widespread speculation that he might remove Zuma within a few months and potentially replace several cabinet ministers, following through on his publicly-expressed intentions of bringing new blood into government leadership. Analysts believe Zuma’s removal is less likely if Dlamini-Zuma wins, although it remains a possibility given the potential liability he represents in the critical 2019 election.

With the election of a new NEC and a new party president, Zuma may face significant pressure to step down as President of South Africa regardless of who succeeds him. Some speculate a faction within the ANC has emerged that believes the earlier Zuma vacates the position of President of South Africa, the higher the likelihood for institutional recovery and economic revival.[iv] There have even been rumors of a  push for a resolution at the December conference to recall Zuma immediately, though it is unclear whether that will come to fruition.[v] Although there is no legal or constitutional requirement for him to do so, some may argue that having two centers of power could further divide the party and be an additional liability in the 2019 national election[vi] – though this could conceivably be less of a problem if Dlamini-Zuma is elected.

Given the importance of the outcome of the December conference for the future of South Africa, the country is consumed by it; the media is dominated by coverage of the latest speculated vote count and many government departments are at a standstill as officials delay key decisions until the next leadership of the ANC – and, by virtue, the country – is decided. The 2019 national election will be a critical test of the ANC’s continued dominance of South African politics, which was already significantly eroded during the 2016 municipal elections.[vii] Although the party received 54 percent of the votes cast nationally, for the first time since 1994, the party lost its majority in South Africa’s key urban centers: Tshwane (where the capital, Pretoria, is located), Johannesburg (the commercial center of the country), and Nelson Mandela Bay – which was a particularly devastating blow given the symbolism. The ANC’s popularity has diminished in urban areas although the party has retained strength in rural parts of the country.

While many find it difficult to conceive of a democratic South Africa in which the ANC is not in power nationally, a scenario in which the ANC does not win an outright majority of the national vote is no longer implausible, especially given the current unpopularity of Zuma. Zuma’s presidency has been marred by scandals and allegations of corruption. According to an August 2017 Kantar TNS poll, Zuma’s approval rating dropped a dismal 18 percent, a new low.[viii] Although this survey only measured sentiments of South Africans living in metropolitan areas, it provides a telling data point.

The party’s choice of who will succeed Zuma will have a direct impact on its likelihood of garnering an outright majority in the 2019 national election. Despite efforts to publicly distance herself from President Zuma, Dlamini-Zuma is inherently linked to him and has been impacted by his unpopularity.[ix] It is worth noting, however, that she does not have a history of corruption and it is unclear how she would govern if elected president. Nonetheless, many South Africa-watchers believe a Ramaphosa victory at the December National Conference would increase the ANC’s likelihood of faring better in the 2019 national elections. Indeed, according to the most recent quarterly SA Citizens’ Survey, 43 percent of respondents approve of Ramaphosa as the next ANC President, while only 16 percent support Dlamini-Zuma. It is also telling that, according to this poll, Dlamini-Zuma’s support peaks at 43 percent in her native KwaZulu-Natal province, and then dips to 20 percent or less in the remaining provinces.[x]

Given the current divisions within the party and the vastly different paths which the two front-runners represent, there is also a real possibility of a split within the ANC after the National Conference.[xi] Analysts suggest this scenario is more likely should Dlamini-Zuma win, particularly since the South African Communist Party (SACP) has been quite vocal in its opposition to Zuma and has already signaled that it would withdraw from the ANC’s tripartite alliance should Dlamini-Zuma win.[xii] There are also rumors that a Dlamini-Zuma victory would prompt the more moderate ANC members, including Ramaphosa and former Finance Minister Pravin Gordhan, to create an entirely new party and contest the ANC under Dlamini-Zuma in the 2019 national election.[xiii]

South Africa is already experiencing anemic economic growth, further exacerbated by a series of devastating downgrades by the international rating agencies primarily due to political uncertainty and concerns over corruption.[xiv] Both Ramaphosa and Dlamini-Zuma acknowledge the importance of addressing the ailing economy for the future stability of the country, though they differ significantly in their approaches. Analysts believe that foreign investors and international rating agencies may be more likely to react positively to a Ramaphosa victory, given his business background.[xv] He has proposed a “new deal” to resuscitate the South African economy by restoring investor confidence and partnering with the private sector to create more jobs.[xvi] Dlamini-Zuma, in contrast, is campaigning on the notion that South Africa’s economic woes of poverty, inequality, unemployment, and corruption can only be resolved through radical economic transformation, which includes job creation, education, and land redistribution.[xvii]

South Africa-watchers will continue to await the outcome of the National Conference with bated breath, as it will determine the future of the ANC and, by extension, the country. The stakes are enormously high, with the ANC’s ability to win an outright victory in South Africa’s 2019 national election being questioned for the first time since the country became a democracy in 1994.[xviii] If the scenario of the ANC failing to win at least 51 percent of the national vote in 2019 were to come to fruition,[xix] the party will find itself forced to form a coalition government or become the opposition. That would require a fairly significant – but not impossible – drop in support nationally. Although the party garnered 62 percent of the vote in the 2014 national election, which marked the first time the party fell beneath the 65 percent mark, it only won 54 percent of the votes cast in the 2016 municipal elections.

As one media commentator put it, the conference delegates will either elect the next President of South Africa or the next leader of an opposition coalition.

[i] “President publicly endorses Dlamini-Zuma as successor,” eNCA.com, May 14, 2017. https://www.enca.com/south-africa/president-publicly-endorses-nkosazana-dlamini-zuma-for-anc-leader

[xv] “The choice that could save South Africa, or wreck it,” The Economist, December 9, 2017. https://www.economist.com/news/leaders/21732114-avoid-dire-two-decade-dynasty-dysfunction-south-africas-ruling-anc-should-ditch