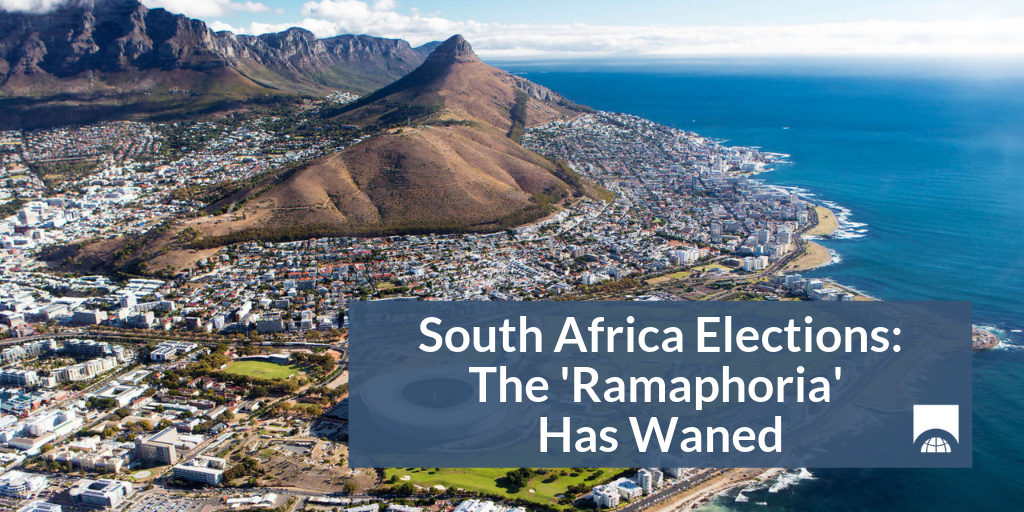 The stakes are high

South Africa is at a critical point in its history. The country is slowly trying to recover from the economic stagnation and rampant corruption under Jacob Zuma (2009-2018). Under his leadership, investor confidence plummeted, South Africa’s state-owned enterprises (SOEs) underperformed and fell into serious financial distress, public debt tripled, and unemployment skyrocketed.

The country recently garnered the international spotlight due to a 2018 World Bank report that ranked South Africa as the most unequal country in the world and an accompanying Time magazine cover story. A Eunomix measure shows that over the past 12 years, South Africa’s performance on a range of social, economic, and governance measures deteriorated more than any nation not at war. Though the removal of Zuma in 2018 spurred hopes for an economic turnaround, business confidence has fallen in the last two years, as the failure of the state-owned energy utility, Eskom, has impeded business operations and raised concerns about state debt. South Africa currently holds only one investment-grade rating and the rand depreciated by 19 percent since 2018. The economic repercussions are most clear in the lack of jobs throughout the country. Africa’s greatest industrial economy has failed to deliver growth commensurate with its population growth, with official unemployment at 27 percent and over 50 percent for black youth.

In light of South Africa’s extreme levels of wealth inequality, the issue of land expropriation gained both domestic and international attention.  The rhetoric by the leftist EFF party worried international investors that South Africa would become the next Zimbabwe. However, the ANC has emphasized that any constitutional amendment on the matter would be coupled with defined regulation to spur economic development. The DA came out strongly against the constitutional reform for land expropriation, citing the damaging effect it would have on business investment.

Multiple ongoing investigations and commissions continue to reveal the depth and breadth of corruption and state capture under the Zuma administration. During the campaign, opposition parties highlighted these efforts as evidence of the extent of the corruption throughout the ANC. In contrast, Ramaphosa framed these investigations as proof that under his leadership the ANC would take a hard approach to internal graft. However, the persistence of Zuma allies in multiple state institutions, such as the revenue authority and state-owned enterprises, weakened the credibility of these claims.

Ramaphosa finally gets a mandate, but is it enough?

As expected, the ruling ANC party won a majority of the vote (57.5 percent), albeit with a significantly smaller margin than its past victories. This election marks the first victory for the ANC under the leadership of Ramaphosa, who has led the party since December 2017 and was appointed president in February 2018 following the resignation of the embattled Jacob Zuma.

Ramaphosa’s appointment as president of South Africa brought optimism and renewed confidence to an economically struggling nation fatigued with widespread corruption in both the private and public sectors. Ramaphosa has been attempting to perform a delicate balancing act of stimulating the economy while addressing the growing budget deficit, reducing inequality, driving transformation, and seriously clamping down on corruption to restore confidence in the ANC. While Ramaphosa appears committed to pursuing reforms to substantially grow South Africa’s domestic economy, restore the country’s international stature, and improve governance outcomes, it is clear he will not be able to do so easily, quickly, or without growing pains. Many analysts predicted that he would only be able to implement needed reforms if the ANC won an overwhelming majority in this election.

Although the initial ‘Ramaphoria’ that engulfed the entire country has waned, Ramaphosa as an individual polled much higher than the ANC as a party in the lead up to elections. In almost all provinces, the national ballot led by him polled higher than the provincial ballots, with those differences being almost commensurate with the DA’s decline. Nonetheless, his individual popularity did not prove strong enough to bring ANC support back towards the crucial 60 percent mark. The ANC’s support was depressed by low voter turnout nationwide and reflects a decline in trust and enthusiasm for the party that brought the country out of apartheid. It remains to be seen whether this margin of victory is large enough for Ramaphosa to secure a mandate strong enough to overcome internal party divisions and implement much needed economic reforms. What may help propel his reform agenda is the realization that without Ramaphosa, the ANC would today probably be facing an existential, rather than electoral and political crisis. 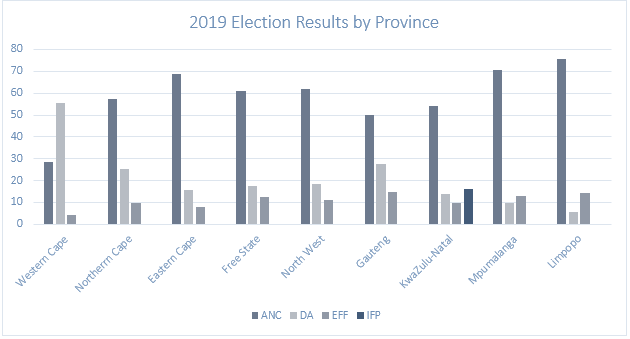 The Democratic Alliance (DA) maintained control of the Western Cape. It won about 21 percent of the national vote, a decline from the 22 percent it won in 2014. Nonetheless, it remains the largest opposition party. Mmusi Maimane is the party’s first black leader and was presented as a fresh face for a party that has long appealed largely to white South Africans. Since 2016, the DA has controlled South Africa’s two biggest cities, Johannesburg and Tshwane, through an often-strained coalition with the far-left EFF. The party doubled down on efforts to win Gauteng, the country’s economic engine. While the DA did not achieve its objective of winning Gauteng, the ANC won Gauteng by a whisker at 50.2 percent, resulting in the ANC averting a coalition government by one seat. It remains to be seen if and how these provincial results will impact the already rocky DA-EFF coalition governments in Johannesburg and Tshwane.

Significantly, the DA shed significant support to the white far-right party, the Freedom Front Plus (FF+), which won 2.4 percent of the vote and is now the fifth largest party in Parliament. Formed in 1994, the party’s original platform centered on the idea of a volkstaat, an autonomous region within South Africa for Afrikaaners following the end of apartheid. The party appealed to voters who felt the DA was becoming too similar to the ANC – too “race obsessed”, according to one party spokesman. The party’s electoral gains are reflective of a global trend of far-right leaders appealing to white anxiety and, specifically in South Africa, over issues such as land reform and economic transformation.

Launched in 2013, the Economic Freedom Fighters (EFF) is led by Julius Malema and appeals primarily to the youth and unemployed populations who were increasingly disaffected with the ANC and the slow pace of economic transformation following the end of apartheid. The new party did surprisingly well in its debut in the 2014 elections with 6 percent of the vote, and its support has grown steadily since. With an election slogan of “Our Land and Jobs Now,” the EFF’s policies of land expropriation and the nationalization of major industries, including mines and banks, appealed to those facing the worst of South Africa’s deeply unequal economy.

While some ANC leaders have called for Malema to return to the ANC, he has had great success in using the EFF to push the ANC to the left, especially on the issue of land reform. Most experts saw Malema as a potential kingmaker in key swing provinces, but the election results have shown remarkable growth for the EFF, without providing any leverage over the political positioning in South Africa. The fact that the EFF received over 10 percent of the vote, however, may mean that the ANC will continue to look over its shoulder at young voters impatient and unhappy with the pace of change.

What does this mean for business?

Absent an overwhelming majority, Ramaphosa may not have the leverage he hoped for within the ANC to embark on substantial domestic changes. His ability to follow through on his goals of forming a new, smaller cabinet and purging Zuma loyalists and those implicated in corruption from positions in the government and parastatal organizations will be seriously impaired but will be one of the first tests of his internal power. However, instead of using internal party mechanisms, Ramaphosa could potentially continue to use commissions and investigations, as well as strengthen institutions neglected under Zuma, to remove obstructionists and those implicated in Zuma-era scandals. He may also use his personal popularity as leverage against the ANC’s weakness to push forward reforms within the ANC and of the economy. This process may take much of his five-year term and may be stalled if Zuma loyalists undermine these efforts.

Ramaphosa will face an uphill battle to articulate clearer policy objectives for the economy, jobs, and state-owned enterprises, given the strengthened populism of the EFF and the more assertive resistance to reform by the FF+. Over the past two years, he has been forced to balance the need for serious restructuring with entrenched interests. Without a clear mandate, Ramaphosa lacks the political capital to move forward with necessary reforms that will spur business confidence, facing opposition from within the ANC, as well as the EFF and trade unions. To compensate for this, moves are being put together for a Policy Advisory Unit within the presidency that will defer all critical socioeconomic policy matters to the president. The first big test will be to assess the impact on Ramaphosa’s proposed breakup of Eskom, establishment of norms around land reform, and policies to generate foreign investment and increase business confidence.

Without a strong mandate and clear policies in place, it will be challenging for Ramaphosa to attract foreign investment to spur the economy and create desperately needed jobs. An infusion of investment will also be key to maintain South Africa’s creditworthiness. The country’s foreign debt has already been downgraded to junk status by Standard and Poor’s and Fitch. It risks losing its one remaining investment-grade assessment by Moody’s if the government does not effectively address the fiscal deficit and financial troubles of state-owned enterprises after the elections.

Ramaphosa is expected to be sworn in as president of South Africa on May 25, which is also Africa Day, in a clear signal of his intentions to restore South Africa’s place as a leader on the continent and an important symbol of African unity as South Africa prepares to chair the African Union in 2020. In a departure from the traditional inauguration ceremony at the Union Buildings, the ANC announced that the event will instead take place at the largest stadium in Tshwane, the capital city, so that more members of the public can participate. These two intentional departures from the norm indicate Ramaphosa’s desire to garner widespread public support for his presidency and restore the tattered image of the ANC both domestically and regionally. Whether he is given the leeway to do it from his own party remains to be seen.