ASG Analysis: Three-Year Blockade of Qatar Comes to an End 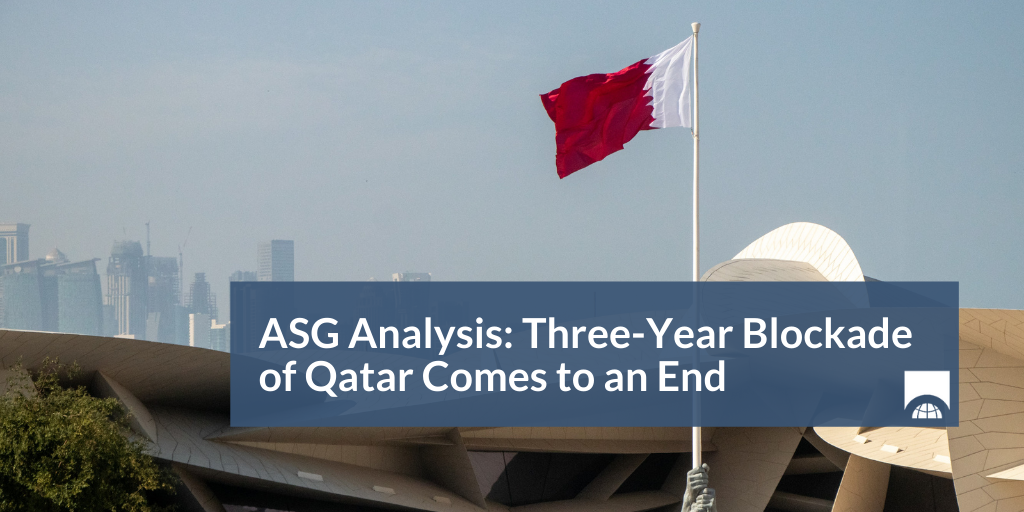 On January 5, at the annual Gulf Cooperation Council (GCC) summit in the Saudi city of Al-Ula, Saudi Arabia, the UAE and Bahrain signed a “solidarity and stability agreement” restoring diplomatic relations with Qatar. Egypt, which is not a member of the GCC but joined the other three countries in breaking relations with Qatar, also signed the agreement. The deal, which was mediated by the United States and Kuwait, lifts the destructive three-and-a-half-year blockade of Qatar that splintered relations in the region and restores the free movement of people and goods. Saudi Arabia was the first of the four blockading countries to open its airspace to Qatari flights, and the other three have since followed suit.

The so-called “quartet” of Saudi Arabia, the UAE, Bahrain, and Egypt imposed the blockade on Qatar in June 2017 citing several longstanding issues of concern, including Qatari ties with Iran and alleged support for political Islamist groups such as the Muslim Brotherhood, which has been designated a terrorist organization by each of the quartet countries. The quartet initially conditioned rapprochement with Doha on 13 demands – including that Qatar scale back diplomatic relations with Iran, sever all ties with the Muslim Brotherhood, and shut down its flagship media outlet Al Jazeera, which other Gulf leaders have accused of publishing content critical of their regimes. Ultimately, the blockade failed to achieve any of these outcomes. Doha has only agreed to cease some of its international legal cases against the blockading countries.

The willingness of the quartet countries to end the impasse without meaningful concessions from Doha can be attributed in part to a desire to cut their losses. The blockade failed to do significant damage to the Qatari economy or force Doha to change its behavior. However, it did complicate U.S. military operations in the region, make doing business across Gulf countries more challenging, and push Qatar closer to Iran and Turkey (another country with which Qatar was pressured to reduce ties). The diplomatic crisis also exacerbated already deep divisions within the Gulf that the official end of the blockade is unlikely to mend.

Saudi Arabia, in particular, had another powerful incentive to end the dispute – a desire to build goodwill with the incoming Biden administration. President-elect Biden has made clear that he will take a tougher stance with Saudi Arabia over its human rights record (especially its 2018 murder of Saudi journalist Jamal Khashoggi) and its intervention in Yemen. Riyadh is expected to also be at odds with the Biden administration on its approach to Iran, with President-elect Biden vowing to reenter the Iran nuclear deal and ease U.S. sanctions if Iran returns to compliance. The resolution of the dispute with Qatar takes one point of contention in the Saudi-U.S. relationship off the table.

The most immediate outcome of the agreement is the resumption of travel. Qatar Airways has already begun to reroute westward-bound flights through Saudi airspace, which will save time, lower costs, and deny Iran lucrative overflight fees. The lifting of travel restrictions will allow tourism and business travel to resume, once Covid-19 restrictions are lifted, and enable citizens from the quartet countries to attend the 2022 World Cup in Doha. Qatar has spent tens of billions of dollars on preparations for the World Cup in hopes that it will drive a major influx of tourism to the country and boost the Qatari economy.

We also expect some resumption of trade, especially of food and basic goods, though it is unlikely to return to pre-blockade levels. Doha has invested heavily in rerouting its trade links to circumvent the quartet countries, building domestic self-sufficiency in key industries, and expanding its economic relations with other partners including the United States, EU, Turkey, and Asia. Domestic food production in Qatar has increased by 400% since 2017. The country is now fully self-sufficient in chicken and dairy; before the blockade, Qatar imported more than 70% of its dairy, mainly from Saudi Arabia. Meanwhile, trade between Qatar and Turkey in particular has increased dramatically. The two countries recently signed 10 new agreements to increase trade and promote Turkish investment in Qatari special economic zones (SEZs).

Overall, we do not expect a full return to the economic status quo ante in the region. Having emerged from the blockade relatively unscathed and with its economic relations successfully shifted away from the region, Qatar faces little pressure to quickly rebuild economic ties with its Gulf neighbors. According to the latest IMF projections, the Qatari economy shrank by just 2.5% in 2020, the smallest contraction among Gulf economies, buoyed by a hefty $21-billion stimulus package and rigorous protocols to contain Covid-19. The IMF forecasts that Qatar will return to 2.7% growth this year, on the back of expected recovery in global energy prices and continued preparations for the World Cup.

Looking ahead, Qatar will likely continue to prioritize increasing national self-sufficiency in key industries and improving its business climate, rather than returning to economic reliance on its Gulf neighbors. For example, Qatar is unlikely to abandon its ambitious targets for food production, which include producing 60% of its own vegetables and 65% of its own fish by 2022. Qatar will also look to build on the progress of business environment reforms made in recent years as part of its National Vision 2030 strategy. Last year, the World Bank ranked Qatar as one of the top 20 fastest-improving business environments, because of a new foreign ownership law, significant progress in developing its SEZs, streamlined processes for public-private partnerships (PPPs), and improved labor laws.

One major unknown is whether Qatar will also rejoin OPEC, from which it withdrew amid the blockade. However, with a more diversified economy than its neighbors and the lowest breakeven oil price in the region, Qatar is less dependent on the recovery of global oil prices and may therefore feel less urgency to collaborate with Saudi Arabia and its OPEC allies to control production levels. Sitting on an estimated 16% of global natural gas reserves, Qatar is likely to focus instead on expanding its LNG exports, especially given the relative strength of the global LNG market compared to crude. Qatari policymakers are also reportedly skeptical about the future of OPEC given tensions among member countries as well as potential headwinds from the incoming Biden administration, which will come under pressure to transition away from fossil fuels and, unlike the Trump administration, is unlikely to intervene with OPEC to push for production caps to protect U.S. producers.

Even before the blockade was lifted, Gulf officials were cautious about putting direct pressure on foreign companies to choose between Qatar and the quartet countries, out of concern that it could backfire. However, major Saudi and Emirati entities (public and private) were frequently apprehensive about doing business with companies that had major business dealings or investment ties with Qatar. While the lifting of the blockade will reduce reputational and competitive risks for companies that have operations in Qatar and seek to do business in the rest of the region, companies should understand that the divisions and mistrust sown by the blockade will take time to mend. For many, the blockade was deeply personal, requiring families to relocate and presenting a variety of legal and operational challenges for Gulf-based organizations.

For this reason, we advise companies to proceed with caution when it comes to rearranging their operations in the region or pursuing new business opportunities, at least until the détente has become normalized in business circles in the Gulf.