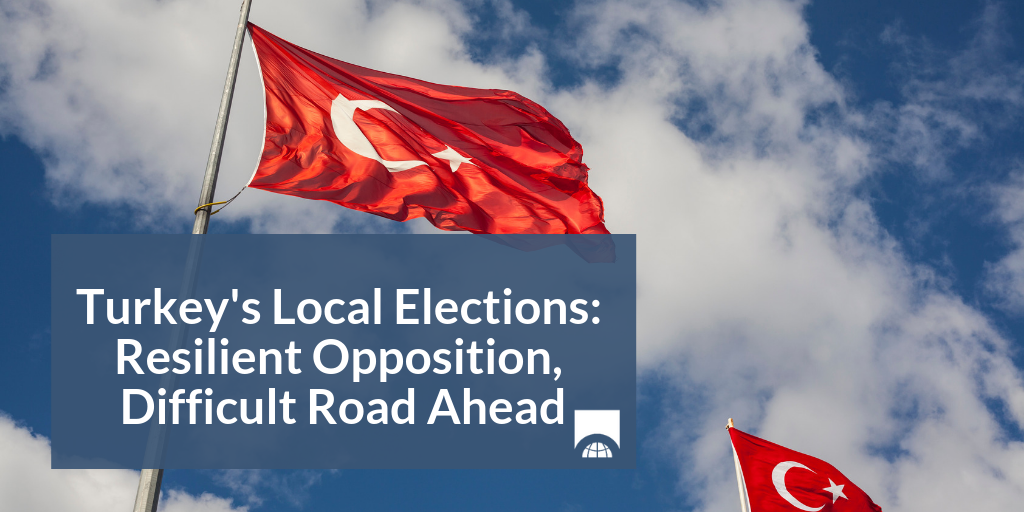 Turkey went to the polls on March 31, 2019, for municipal elections after a divisive campaign and amid an economic downturn. A strong showing for the opposition alliance led by the Republican People’s Party (CHP) resulted in losses for Erdoğan’s Justice and Development Party (AKP) in four of Turkey’s five largest cities, including Ankara and Istanbul. The opposition victory was a positive signal to millions of Turks that their voices still matter and comes despite weeks of hard campaigning from Erdoğan, who was helped by loyalist media and deployed state resources in his attempt to lift his party to victory.

Consistent messaging, strong candidates, and tactical collaboration contributed to the opposition’s success. Drawing on growing disaffection with elites and frustration with a weakened economy, opposition candidates campaigned as alternatives to Erdoğan’s angry nationalism. Strategic voting also worked in the opposition’s favor. The CHP alliance with the center-right Iyi party held together, and in the largest cities Kurds who typically vote for the pro-Kurd People’s Democratic Party (HDP) supported the CHP instead.

Still, Turkey’s political landscape remains divided along familiar lines. Erdoğan’s alliance with the Nationalist Movement Party (MHP) won nearly the same percentage of votes nationally as in the last general election (52%), and geographic divisions mirror the results of 2017’s contentious constitutional referendum and the June 2015 general election. Despite partial recounts in Istanbul and Ankara, the outcomes are likely to stand.

New relationships will bring tension between levels of government

The municipal elections constitute an important reshuffling of Turkey’s political landscape. After 25 years under the AKP and its Islamist predecessor, Istanbul and Ankara will fall under CHP control. In addition to its symbolic effects, this change of power will have a concrete effect on national power dynamics. Istanbul, Turkey’s largest city and center of commerce, has long been a source of wealth, power, and prestige for the AKP. Erdoğan has used the city as a platform from which to showcase his mega-projects and has himself campaigned on the slogan, “Whoever wins Istanbul wins Turkey.”

The CHP will now seek to replicate the AKP’s successful use of Istanbul’s patronage networks, which propelled Erdoğan’s rise as a national figure during his tenure as mayor there in the 1990s, as it seeks to translate a positive outcome in municipal elections into political momentum at the national level.

Erdoğan’s AKP is unlikely to allow this to proceed easily, and the party split between national and municipal governments will bring Istanbul and other opposition-held municipal governments in direct conflict with the central government. These relationships could soon face their first strain: May 1 pro-labor demonstrations, and the late-May/early-June anniversary of the 2013 Gezi park protests. We expect these clashes to play out on four levels:

Turkey has no scheduled elections until 2023, and this provides a welcome respite after Turkey’s seventh major campaign in 3 years. The contentious municipal election outcome means that neither the AKP nor its coalition partner MHP are likely to push for early elections, and 4.5 years should provide a long enough runway to implement much needed reforms. However, these results may still not be enough to bring stability to Turkey, and Erdoğan is expected to replace most of his Cabinet of Ministers and party senior and field leadership in response to the poor election results.

Turkey faces significant challenges ahead, the most pressing being its fragile economy. This quarter Turkey entered a recession for the first time in a decade and has large foreign-denominated debt. President Erdoğan has so far rejected seeking assistance from the International Monetary Fund, so the source and magnitude of a potential bailout remains uncertain. His continued pressure on the central bank to keep interest rates low threatens to amplify the problem.

President Erdoğan has been both willing to have fights and to adapt to maintain power. To renew his mandate in 2023, he will have to reform and rebalance a credit-dependent growth model, jumpstart the country’s value-added exports, and restore confidence from foreign investors. This will lead to tough choices, including on seeking a large foreign bailout. He will also need to re-capitalize banks and an FX debt-loaded private sector and decide whether to bring in technocrats with a strong track record of reform. Businesses should pay attention to several developments which will indicate the path forward:

Turkey faces a new round of challenges in its relationship with the United States. American officials have long warned that the delivery of Russian S-400s to Turkey, a NATO ally, would jeopardize Turkey’s planned purchase of 100 U.S. F-35 fighter jets given the risks that Moscow could use the S-400 radar to uncover vulnerabilities of the jets – which the U.S. is also selling to other NATO allies.

The U.S. government has warned that delivery of the S-400 would trigger mandatory sanctions under the Countering America’s Adversaries Through Sanctions Act (CAATSA), which could lead to financial penalties on the Turkish entities involved in the deal with Moscow. The legislation allows for a range of options, from fully cutting off those involved from the U.S. market to largely symbolic measures (like a prohibition on U.S. government procurement contracts). Though we expect these would be tailored to minimize their financial impact, even minor penalties would likely further spook foreign investors and increase pressure on the Lira.

At senior working levels the U.S. Administration is building a runway that would allow the sides time to deconflict and find an accommodation. For instance, immediately after Turkey’s municipal elections, the Pentagon announced that it will suspend deliveries associated with Turkey’s F-35 operational capability until Turkey cancels the S-400 deal. In addition to purchasing planes, Turkish firms are also involved in manufacturing some components. The process of finding a replacement for Turkey in the F-35 production consortium will take time, during which the governments can discuss alternatives.

For its part, Turkey has repeatedly stated that the deal with Russia is already done, and they are now unable to cancel it. Turkey’s involvement in Syria also complicates the choice, as Erdoğan needs President Putin’s support to maintain Turkey’s hold in northern Syria, and Turkey’s security cooperation and trade relationship with Iran and other allies like Qatar in the Middle east complicates the U.S. position in its push for a “maximum pressure” campaign against Iran.