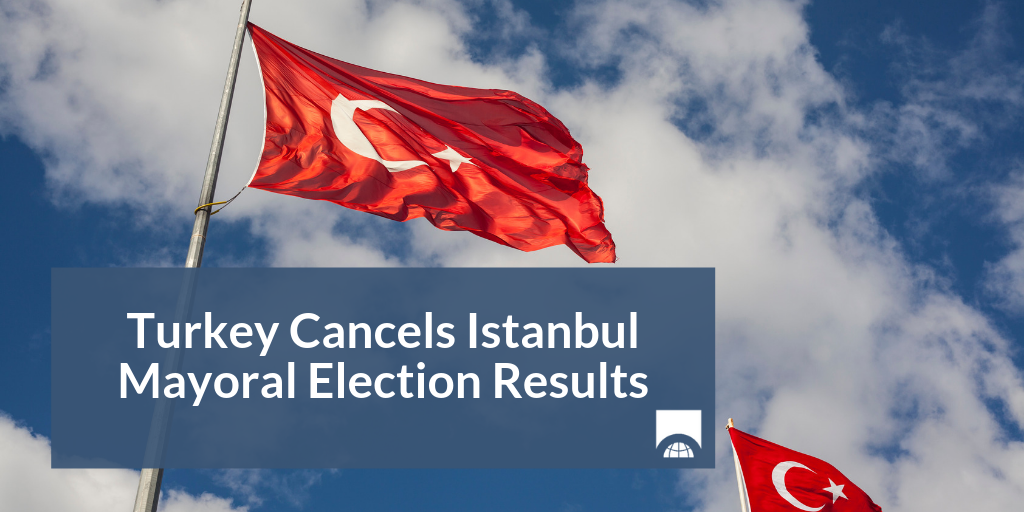 Turkey’s Supreme Electoral Council (YSK) decided on Monday, May 6, to annul the Istanbul mayoral election result following heavy pressure from the governing Justice and Development Party (AKP). The decision comes more than a month after the election and overrules the Istanbul Election Council’s move to certify İmamoğlu as mayor following a two-week long recount which showed he won by 13,000 votes. President Recep Tayyip Erdoğan has blamed the March election result on organized crime and corruption and defended the YSK decision amidst protests from the opposition Republican People’s Party (CHP). These complaints, and the YSK finding that several polling stations were not run by civil servants ostensibly provided the basis for the decision. However, the YSK has not released any evidence, and city-council level elections in which AKP was more successful were not annulled despite taking place at the same polling stations.

This marks a significant departure from Turkey’s tradition of respecting election results and will further erode diminishing trust in public institutions. Senior party members aware of this risk reportedly urged the president not to force a re-run given its cost to the government’s legitimacy. While rumors of an intraparty AKP split are likely overblown, Erdoğan clearly decided that Istanbul was worth the cost. As we noted in our previous analysis, the Istanbul election result would have upended political dynamics in Turkey due to the city’s economic and political importance.

Monday’s decision stripped İmamoğlu of his position and set the stage for re-run elections on June 23. İmamoğlu and the CHP have criticized the decision, but they have vowed to participate. In the meantime, Istanbul governor Ali Yerlikaya has been appointed by the AKP’s hardline interior minister to serve as acting mayor.

Erdoğan understands the stakes and will look for ways to boost AKP’s chances of winning in June. The timing will already provide an advantage: summer vacations could depress turnout, including from a large student population that will be out of town for the summer recess. Erdoğan may also explore alternate arrangements with coalition partners, extending beyond the AKP’s nationalist coalition partner, the Nationalist Movement Party (MHP), to bridge the gap that led to CHP’s small victory margin. More likely, Erdoğan’s chosen candidate – Binali Yildirim will probably stand again, though that is unclear – will run on a platform of fear while the president infuses money into the economy.

In calling for an election re-run, Erdoğan is exposing himself to a risk: there remains a chance that AKP will lose again. Since becoming mayor, İmamoğlu has gained popularity quickly, and groups across the political spectrum have expressed frustration at the decision to annul the election outcome. İmamoğlu’s newfound credibility, combined with public disapproval of the annulment, could produce a second win for the CHP.

The YSK’s decision to cancel the election calls into question the democratic transition of power through elections in Turkey. As in 2015, when Erdoğan launched a snap election campaign amid a military campaign against the terrorist Kurdistan Workers Party (PKK), this decision solidified the view that Erdoğan will go to any length to retain power. Turkey’s pliant institutions – hollowed out since 2016 – enable him to do so. Erdoğan’s argument that two decades of election victories give him a mandate to rule increasingly distorts the reality that Turkey remains highly polarized.

In the aftermath of the decision, statements from Germany, France, and the EU expressed alarm at the decision to re-run elections. Several, including the French government and the EU, have also called on Turkish authorities to extend invitations to international election observers, which Turkey is unlikely to do. The U.S. was slower to take note, and its position softer.

Amidst the political turmoil, Erdoğan must also confront ongoing challenges in Turkey’s relationship with the United States. The two remain in a standoff over the U.S. threat of sanctions if Turkey takes delivery of the Russian S-400 missile defense system in July. The U.S. Congress is also becoming increasingly vocal. It will almost certainly use the upcoming 2020 National Defense Authorization (NDAA) legislation to offer bipartisan amendments that would explicitly prevent Turkey from obtaining the F-35 if it goes ahead with the Russian delivery. These amendments might mirror language included in Senator Robert Menendez’s Eastern Mediterranean Security bill, which is currently under consideration. Such restrictions are likely to have broad bipartisan support and could attempt to limit the Trump administration’s flexibility on the potential sanctions. Erdoğan could be more willing to find an accommodation on the S-400 issue now to avoid potential negative impacts on the economy, although the process remains complicated given Turkey’s reliance on Russia in northern Syria.

Turkey’s fragile economy continues to be its greatest domestic challenge. Despite its size and rapid growth in recent years, Turkey’s economy remains vulnerable due to large foreign denominated debt and the volatility of the Turkish lira. Erdoğan will remain focused on ensuring economic stability through the election and may encourage state banks to lend more, call on the Central Bank to decrease interest rates, or explore other maneuvers to shield voters from inflation.

This will make it even harder to implement necessary longer-term economic reforms, including restoring confidence from foreign investors, jumpstarting the country’s value-added exports, and reforming and rebalancing a credit-dependent growth model. Re-affirming central bank independence will be crucial.

Turkey must also re-capitalize its banks and address a foreign debt-loaded private sector. Erdoğan’s son-in-law, Finance Minister Berat Albayrak, announced a new economic program last month to inject capital into state-owned lenders, backed by issuing $4.9 billion of bonds at state banks. The pledge is largely viewed as insufficient, raising doubts about a real plan to address Turkey’s structural weaknesses. Erdoğan may shake things up after the election by shifting Albayrak to another position in favor of more competent technocrats and former ministers, though this will depend in part on their willingness to return to office.

The lira’s tumble and weakening democratic processes have caused foreign investors to shy away from Turkey. This trend is likely to continue unless there are meaningful reforms. Turkey remains an important consumer market and regional hub, although companies will need to weigh this against increasingly worrying trends in the country.