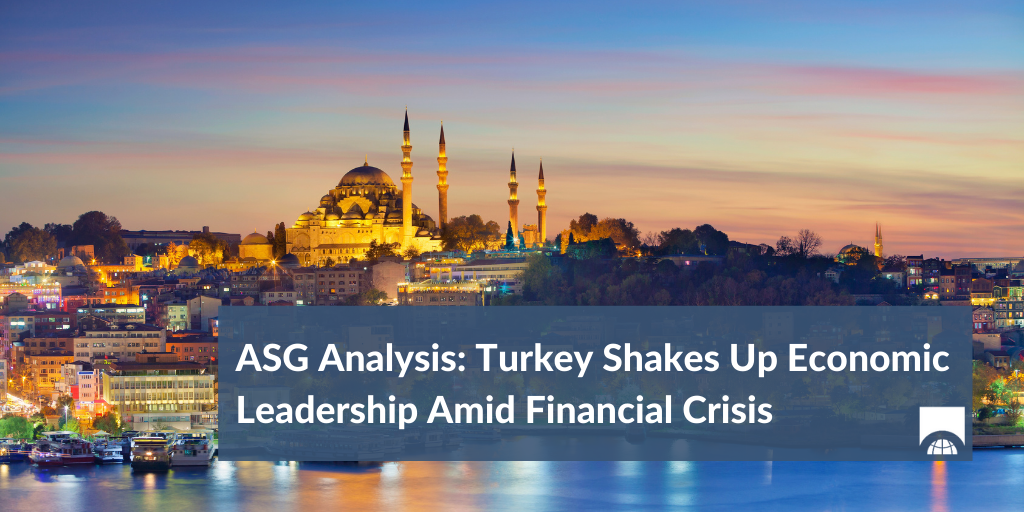 On November 7, Central Bank Governor Murat Uysal was replaced by Naci Ağbal, a former finance minister and experienced technocrat. The next day, Berat Albayrak, President Erdoğan’s son-in-law, resigned as Minister of Treasury and Finance, a position he had held since 2018. While Albayrak officially announced his resignation via Instagram, citing health issues, ASG sources believe Minister Albayrak was removed from his post after Mr. Ağbal briefed President Erdoğan on the Central Bank’s $40 billion deficit in foreign reserves. Minister Albayrak has been replaced by former Deputy Prime Minister Lütfi Elvan, a seasoned and competent official. Elvan’s replacement in the Budget and Planning Commission post was another former Minister, Cevdet Yılmaz. All three men are quite competent, with track records dating back to the first decade of Justice and Development Party (AKP) governance.

After Uysal’s appointment in 2019, the former Governor slashed interest rates from 24 percent to 8.25 percent at President Erdoğan’s direction, putting pressure on the lira and causing it to slide. The Central Bank then began to sell foreign exchange reserves and borrow dollars from domestic banks to buy lira, a strategy that backfired when Covid-19 hit and the amount of foreign currency entering Turkey fell drastically. Trying to fill these gaps has drained the Central Bank’s foreign exchange reserves, as it now owes more foreign currency to domestic banks than it has.

As President Erdoğan’s son-in-law, Minister Albayrak was largely shielded from responsibility for the poorly performing economy, but that is no longer the case. Albayrak’s removal had been rumored for months and was largely seen as an indicator of whether Erdoğan would get serious about rescuing Turkey’s economy and returning to orthodox economic policy. Given his spats with politicians and bureaucrats loyal to Erdoğan, Albayrak is not expected to return. While Albayrak’s handling of the economy is likely the main reason for his departure, there is also speculation that Governor Uysal’s replacement with Mr. Ağbal played a role. Governor Ağbal is a technocrat and known for his fierce criticism of Albayrak’s economic policies, whereas Uysal and Albayrak had a strong working relationship.

In addition to Turkey’s economic woes, President Erdoğan is struggling to keep his governing coalition with the Nationalist Movement Party (MHP) together and the personnel change may in part be an attempt to save the alliance. Had Erdoğan not replaced Uysal and Albayrak, MHP might have called for early elections to bring in new leadership and reverse Turkey’s economic decline. Erdoğan has since called for Turkey’s parliament to convene earlier than scheduled to help rejuvenate his ruling AKP. While more moves are expected, Erdoğan may wait a bit longer before a larger cabinet reshuffling to see how well the new appointees work with their counterparts and respective staff.

Erdoğan is also threatened by breakaway parties led by former Prime Minister Ahmet Davutoğlu and former Deputy Prime Minister Ali Babacan, who served under and were close allies of Erdoğan until a falling out over AKP’s direction in 2019. Both Governor Ağbal and Minister Elvan are Erdoğan loyalists, but Ağbal worked for a number of years under Babacan and Elvan served as Deputy Prime Minister under Davutoğlu. Bringing in Ağbal and Elvan could thus be a shrewd move by Erdoğan to prevent defections to Babacan and Davutoğlu’s parties and make it harder for Erdoğan’s former allies to mount a real challenge to his rule.

Internationally, President Erdoğan likely views President-Elect Biden’s administration with trepidation, which may have also played a role in his decision to clamp down on the economy. Erdoğan mostly avoided U.S. sanctions and other repercussions during the Trump era, but he is expecting tougher times ahead. Though it is unclear whether the Biden administration will move forward with sanctions over Turkey’s purchase of S-400s from Russia or push for large fines on Turkey’s HalkBank for previous violations of Iran sanctions, it will likely take a harder line on Erdoğan’s aggressive actions abroad, including in Syria, Libya, and the Eastern Mediterranean. At the same time, both Biden and Erdoğan are pragmatic and will likely seek a relationship that is more stable and policy-driven.

State of the Economy

President Erdoğan is de facto in charge of economic policy in Turkey and has increasingly interfered in Central Bank decisions, especially regarding interest rates. He has long believed that raising interest rates is inflationary and instead favors cutting rates to boost growth and spending. These unorthodox economic policies, combined with Erdoğan’s increasing authoritarianism at home and assertiveness abroad, have caused an exodus of long-term foreign direct investment and capital from Turkey’s bond and stock markets, leaving Turkey with a chronic deficit in savings. The tourism sector, another crucial source of foreign currency, has been badly affected by the pandemic and has further contributed to a steep fall in the lira.

Turkey’s economy is now cratering and there are rising fears of another financial crisis if the government does not enact real changes to monetary policy. The Turkish lira has fallen over 30 percent against the dollar this year, hitting a record low that makes it the worst performer in emerging markets. The economic situation is further worsened by persistent inflation around 12 percent, rapidly shrinking Central Bank reserves, and unemployment around 13 percent, all of which have further deterred foreign investment. Both the IMF and Moody’s predict a five percent contraction in 2020, which would be Turkey’s first annual contraction since 2009 after an average growth rate of more than 5 percent between 2010 and 2018. Minister Albayrak had been unable to stop the lira’s decline despite spending Turkish foreign reserves; since the beginning of 2019, the lira has lost almost half its value and the Central Bank has used an estimated $120 billion in foreign exchange reserves to prop it up.

Unlike Minister Albayrak, who investors rarely saw or spoke with during his tenure, Minister Elvan is pro-markets and pro-investment, making him much more approachable. He has a reputation for reaching out to business leaders, NGOs, and other players to consult on new regulations. Both Minister Elvan and Governor Ağbal are credible and respected bureaucrats who believe in a rules-based free market economy. Given President Erdoğan’s control over economic decisions, however, Ağbal and Elvan will have a difficult time making tangible changes to monetary and fiscal policies. Both are loyal to Erdoğan, so a newfound independence for the Central Bank and in Turkey’s fiscal and monetary policy is unlikely.

In a recent speech, President Erdoğan signaled a pro-investor stance, saying that Turkey will not refrain from implementing the right prescriptions even though they may be painful. He outlined his goal to attract international investors through increased transparency and predictability, an accessible and effective legal system, good governance, and structural reforms. Investors will need to look for further clues as to whether either Ağbal or Elvan will be able to convince Erdoğan that steep interest rate increases are necessary, but both have expressed their commitment to stabilize prices and attract domestic and foreign investors.