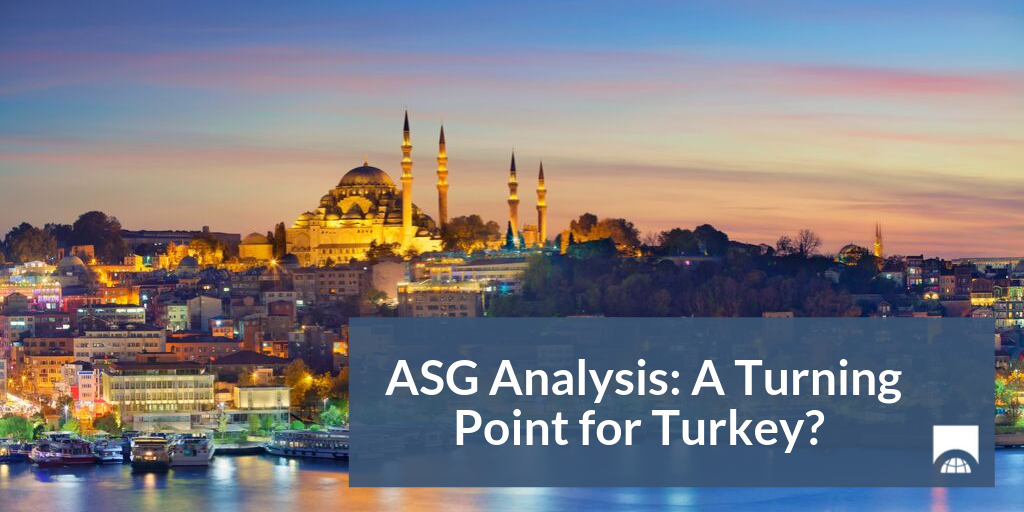 Turkey wants to be seen as ready for business after three years of domestic and regional turbulence amid electoral uncertainty.  Some positive signs are apparent:

• Turkey has so far managed the lira with stability, and economic performance is strengthening;
• Tensions with the U.S. have waned for now, and new European Union leadership should reaffirm arrangements on migration after some tension;
• Large, symbolic investments are being announced.

Whether the case is credible depends on several events that should be followed closely over the coming few weeks and months:

For the first time in three years, a clearer picture is beginning to emerge around how companies might engage government stakeholders in Turkey. No major elections are scheduled at the national or municipal levels until 2023, and the immediate threat of U.S. sanctions has receded (though this may change if pressure on the administration from Congress increases). This should give the government some leeway to address the underlying economic challenges it faces. Opinion polls before the March 31 mayoral elections showed that the economy was a top concern for voters, and a return to healthy growth will be important for Erdoğan’s next election campaign.

At the same time, breakaway movements from within the AKP led by former party leaders Ali Babacan and Ahmet Davutoğlu have emerged as potential political challenges for Erdoğan. While these parties may become a channel for dissent, they are unlikely to unseat Erdoğan or significantly limit his authority. A long expected political reshuffle (likely to take place within the next 30-45 days) will further consolidate power around Erdoğan and address some of this internal tension. Possible changes include adjustments to streamline the presidential system to make it more effective, as well as a significant overhaul of the AK Party, which is expected to take place during a party congress scheduled for next month. Up to two-thirds of existing AKP members could change as the party seeks a new look following its municipal election losses.

This shakeup will also involve a much-anticipated cabinet restructuring that will likely include the removal of finance minister Berat Albayrak in favor of former finance minister and experienced technocrat Naci Ağbal. Members of the current cabinet from the private sector are set to be replaced by seasoned MPs or former ministers, as both AKP advisors and parliamentarians think that the disconnect between ministers and political field operatives cost the AKP local elections. Other ministers that may be replaced include the ministers of health, tourism, agriculture, education, and trade.

A multi-year economic program to rebalance the economy is underway, and underlying economic factors are beginning to steady. These are important developments for an economy that has faced significant challenges, including large amounts of privately held foreign denominated debt, persistent inflation, high youth unemployment, current accounts deficits, and U.S. tariffs.

Recent economic data provides some reason for optimism. The second quarter’s 1.5% year-on-year contraction was smaller than anticipated due to robust export performance, and the economy should begin expanding in the second half of the year. Inflation has slowed, and government stimulus in automotive, white goods, and other manufacturing sectors has countered some of the worst effects of the contraction in consumer demand. Turkey is also on track to achieve a current account surplus for the first time in more than a decade. In another sign that it hopes to stimulate growth, the Central Bank has cut rates by another 325 basis points – a total of drop of 750 basis points in 2 months – and softened its inflation tracking number to slightly above 15%.

If sustained, these indicators will further strengthen confidence in the economy; projections for 2020 anticipate 2-3% growth in contrast to a largely flat 2019. Nevertheless, economic developments should be monitored closely as Turkey works to address its ongoing challenges.

In recent meetings, President Trump and President Erdoğan appear to have papered over differences and found a modus operandi, despite underlying disagreements on a range of topics including U.S. collaboration with Kurdish YPG in Syria. Trump has been reluctant to apply sanctions in response to Turkey’s purchase of Russian S-400s and has so far avoided pressure from Congress to do so. Congress only recently returned from its summer break and may become impatient, particularly if tensions with Turkey heat up over disagreements on issues like Syria.

The Trump administration has also indicated that it hopes to increase bilateral trade by a factor of five, to $100 billion annually.  While the headline goal is unrealistic, this suggests that the two leaders will look to maintain a cooperative bilateral atmosphere after three years of tension. For Trump, increasing bilateral trade could help to rebuff pressure from Congress on sanctions. Still, progress toward a trade agreement depends on Turkey accepting onerous conditions (such as purchasing LNG from the U.S. rather than closer sources) and the Trump administration advocating effectively. Businesses would be wise not to invest in this process.

While the leaders look to signal increased cooperation, opposing interests in Syria continue to be a source of tension. A recent agreement between Turkey and the U.S. established a command center and joint military patrols in northern Syria and set up a safe zone for refugees, but the deal does not resolve underlying differences about how the two sides view the YPG. Recent trilateral meetings between Turkey, Iran, and Russia further complicate the matter and could increase pressure from Turkey for the U.S. to withdraw. The two leaders will meet on the sidelines of UN General Assembly meetings in NYC this month; the tenor of that meeting will signal the future direction of bilateral relations.

Turkey’s relationships with the EU could also be strained by renewed discussions regarding the implementation of the Turkey-EU migration deal. A recent uptick in migrants from Turkey to Greece has alarmed European leaders, who Erdoğan has accused of not complying with the deal. The new European Commission, which recently announced Greek Brussels-insider Margaritis Schinas as the migration commissioner, has migration high on its agenda, and both sides have incentives to come to the table. New Greek Prime Minister Kyriakos Mitsotakis’s offer to initiate a constructive dialogue with Ankara should help. A resolution is likely, even if the relationship is rocky in the meantime.

A Path Forward for Investment?

Some investors are beginning to take notice of improvements in the investment climate, and several recent investment announcements could serve as a model for companies looking to expand their presence in Turkey. Volkswagen, which decided earlier this year to build a factory near the western coastal city of Manisa, is in late stage talks regarding a $1.3 billion investment. The pharmaceutical manufacturer Gilead has also recently announced its intention to invest $250 million to localize two innovative drugs.

These investments are a positive signal, and companies that understand the Turkish government’s investment priorities (e.g., increasing local production, exports) have an opportunity to strike attractive deals. In many cases, a nod from the top can help to fast-track investments that would otherwise encounter roadblocks due to bureaucratic inertia or lack of capacity. Given the Turkish economy’s challenges, investors motivated by Turkey’s long-term potential and fundamentals could reap significant dividends following a timely investment decision.

While there are sure to be challenges ahead, there is now an opportunity for business to engage in long-term planning that had been impossible during Turkey’s recent political turmoil. As they make decisions, businesses should keep the following in mind:

• As Turkey shows signs that it is beginning to emerge from recession, it is now a good time for investors to re-examine potential investments or previously agreed projects that have been put on hold. As with other emerging markets, any new commitments will not be risk-free, but recent developments indicate that Turkey is motivated to attract the foreign capital.

• The economy is relatively stable and Turkey is in the midst of an economic rebalancing program aimed at export-led industrial growth, but new political challenges are sure to arise. Promoting growth and employment will remain a priority regardless of the top bureaucrats that emerge following the pending reshuffle.

• With a new cabinet set to take office with a fresh set of directives, businesses should seek to establish relations with new officials and tailor their value propositions to Turkish government priorities. Making contact with key officials who can fast-track investment will be a critical success factor.

• For U.S. investors in the automotive and parts, aerospace, defense, pharma, and high-technology sectors, it is worth monitoring the potential for increased access to the Turkish market as a result of proposed trade negotiations.