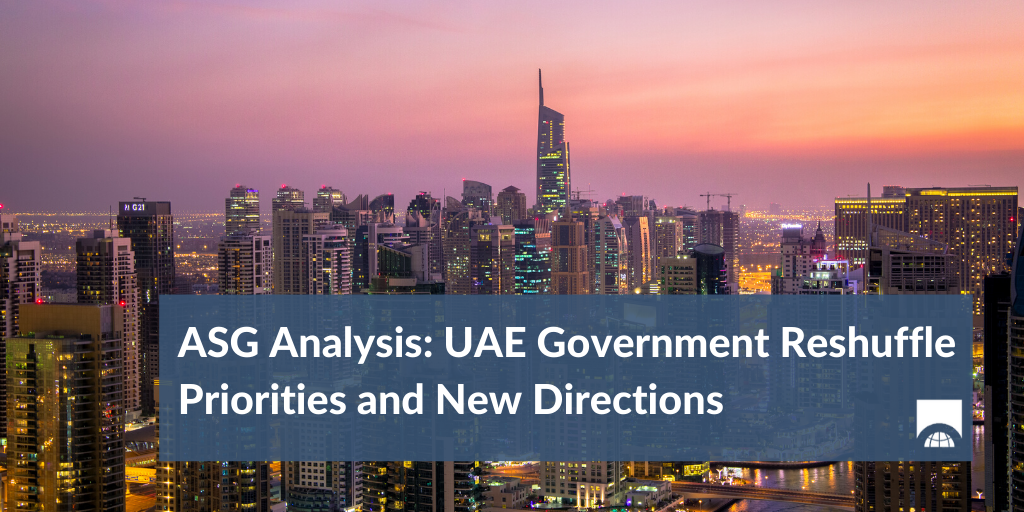 On July 5 in a series of tweets, UAE Prime Minister and Vice President Sheikh Mohammed bin Rashid Al Maktoum announced a sweeping reshuffle of the federal government including the creation of new government ministries, the merging of other ministries and agencies, and the appointment of several new Cabinet officials. The reshuffle follows comments made in May by Sheikh Mohammed, who is also the Ruler of Dubai, that the UAE would review the government structure as part of its response to the Covid-19 crisis, with the aim of creating “a government that is more agile, flexible, and fast to maintain its pace with new and different priorities.” In his announcement this week, Sheikh Mohammed laid the groundwork for further changes in the future, explaining that “constant changes will remain the slogan of the coming period until we reach the best government model that keeps up in this new era and achieves the aspirations of the Emirati people.”

While the reshuffle affected a wide range of sectors and government authorities, the most significant changes providing insight into the UAE’s new priorities revolved around a streamlining of government, an increased emphasis on digitization and digital technology, a reinforcement of the Ministry of Economy, and increased prioritization of food security amid the current crisis. We have included a visual of all changes announced at the end of this update.

Notably, all changes were made at the federal level, rather than in emirate-level governments. We expect emirate-level government to follow the lead of the federal government over the coming months with similar consolidations and reshuffles to address new priorities following the onset of the pandemic. Absent from this reshuffle was any explicit indication that Abu Dhabi is expanding its power over countrywide decision-making or acquiring Dubai government assets, developments that have been rumored recently due to Dubai’s difficult financial position and high debt levels.

The UAE has been especially hard hit by the economic fallout from the pandemic. The severe drop in oil prices as global demand fell sharply (exacerbated in early March by the brief price war between Saudi Arabia and Russia) has taken a heavy toll on Abu Dhabi revenues, of which oil typically accounts for around 80 percent. While prices have rebounded to some degree in recent weeks – Brent Crude closed around $43 per barrel on July 7, compared to an 18-year low below $20 per barrel on April 21 – they remain far below their near $70-per-barrel mark at the end of 2019. Furthermore, the production cuts that have contributed to the price rebound mean that the UAE produced only 2.5 million barrels per day (bpd) in June, well below its capacity of 4.2 million. While Dubai relies far less on oil for its revenue, many of its key sources of income – including tourism, aviation, logistics and retail – have taken significant hits. Dubai also faces the impending maturation of tens of billions of dollars of government debt, estimated by Capital Economics at more than $21 billion over the next three years and an additional $30 billion in 2023.

Against this backdrop, the emphasis on digitization, focus on economic management, streamlining of government, and prioritization of self-reliance provide insight into how the UAE intends to move forward from the current crisis.

One of the headline moves of the reshuffle was the announcement that 50 percent of government service centers will be eliminated and transitioned into fully digital portals within two years. Hamad Al Mansoori, previously the Director General of the UAE’s Telecommunications Regulatory Authority (TRA), has been appointed Head of Government Digital Services to lead this initiative and create a single online portal for government services. Sheikh Mohammed also announced an emphasis on the development of work-from-home capabilities. Omar Al Olama, who has served as Minister of State for Artificial Intelligence since 2017, was appointed Minister of State for Digital Economy and Artificial Intelligence and will lead this initiative. In another digitally focused appointment, Mohammed Hamad Al Kuwaiti was named the UAE’s Head of Cybersecurity. Al Kuwaiti also serves as Executive Director of the National Electronic Security Authority, the UAE’s federal cybersecurity authority. Finally, Sheikh Mohammed announced the creation of a new Ministry of Industry and Advanced Technology to be led by Sultan Al Jaber, who fulfills a number of roles including that of CEO of the Abu Dhabi National Oil Company (ADNOC) and is a prominent figure in federal and Abu Dhabi leadership circles.

Taken together, these moves signal that the Covid-19 pandemic has accelerated the government’s plans to make digital technologies a centerpiece of the UAE’s economic growth strategy, with a significant digital overhaul of government services, development of work-from-home capabilities to equip Emirati entities to operate in a post-Covid world, and increased emphasis on cybersecurity. These priorities will likely create increased demand from UAE government entities for digital services such as data storage, data processing, and cybersecurity solutions, and prompt greater regulatory focus on data privacy and localization. These events also make it increasingly likely that the TRA will move forward with the new Data Protection Law which has been rumored to be under development for more than a year. Another area that will likely see increased digitization is the healthcare sector. The global pandemic has triggered high levels of interest in areas such as telemedicine, genomics and artificial intelligence for healthcare.

Reinforcement of the Ministry of Economy; New and Continuing Priorities

These changes underline a shift in government focus, in Dubai particularly, from healthcare crisis response to broad economic recovery. In March 2020, when faced with an already sluggish economy, the UAE Cabinet passed a resolution opening a number of business activities in agriculture, technology and manufacturing to full foreign ownership. In the post-Covid landscape, the government will continue to incentivize foreign direct investment, particularly in the fields of technology, healthcare, education, agriculture and manufacturing. In return it will demand local investment in production processes, innovation, and research & development. “Emiratization” will more likely take the shape of “localization,” translating into local content requirements rather than private sector hiring quotas. A good example of the government’s thinking is the May 3 Abu Dhabi Executive Council decision that introduced new public procurement criteria favoring bidders able to demonstrate a degree of local content in their goods and services.

While considering important domestic questions about fiscal stability, foreign ownership, long-term visas for foreigners, and income tax, the UAE’s foreign economic policy will continue to be based on coalition-building and the development of strong bilateral relationships with current and emerging economic powers. The UAE will furthermore seek to expand its portfolio of trading partners and diversify its supply chains in the wake of the Covid-19 pandemic.

In addition to the elimination of 50 percent of government service centers, further streamlining measures include a plan to merge about 50 percent of federal agencies within other agencies and ministries. Several major mergers were announced immediately, including that of the Ministry of Energy and Industry with the Ministry of Infrastructure Development to create the Ministry of Energy and Infrastructure. Additionally, the National Media Council and Federal Youth Foundation were merged into the Ministry of Culture and Knowledge Development to form the Ministry of Culture and Youth. The Emirates Investment Authority, the UAE’s federal asset manager, gained authority over several agencies, including the Federal Electricity and Water Authority, the Emirates Post, Emirates Transport, and the Emirates Real Estate Corporation. We provide a full description of the government consolidation measures on the last two pages of this report.

The last major federal-level reshuffle took place in October 2017. This week’s measures are likely inspired in part by a desire to cut government expenditures and downsize the federal bureaucracy in the wake of Covid-19, as also announced by Sheikh Mohammed in May. As mentioned above, ASG expects that government restructuring won’t be limited to the federal level as the different emirates consider their strategies to respond to the economic crisis. Individual emirates will likely look to consolidate banks and government-related entities. Although we currently see increased levels of inter-emirate collaboration in fields such as healthcare and education, we do not believe that this will necessarily lead to broader federalization in the long-term.

An additional significant piece of Sunday’s reshuffle was the UAE’s doubling down on prioritization of food security efforts. Minister of State for Food and Water Security Maryam Al Muhairi, who was attached to the Ministry of Presidential Affairs, will lead efforts to invest in food technology, expand international food supply chain relationships, and oversee the security of food stockpiles. Newly appointed Minister for Climate Change and the Environment Abdullah Belhaif Al Nuaimi will support the domestic food production efforts of Emirati farmers. Taken together with efforts described above to incentivize local content among foreign investors, these measures point to an emphasis on developing domestic capabilities and reducing the UAE’s reliance on foreign trade following the pandemic.

As highlighted in Sheikh Mohammed’s announcements, the UAE federal and emirate-level governments will likely continue to see changes in the coming months as the country responds to the pandemic and retools for the future. Companies operating in the UAE should plan current business decisions around the priorities outlined in broad strokes in this reshuffle – domestic capability development, government downsizing, and increased digitization – while expecting further changes along these lines.