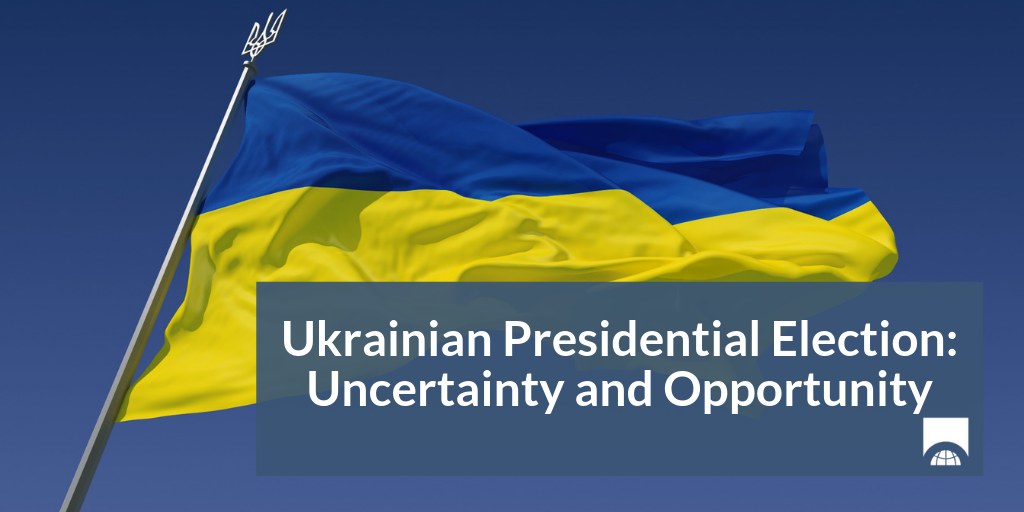 In Ukraine’s April 21 second-round presidential election, 41-year-old actor and comedian Volodomyr Zelensky trounced incumbent President Petro Poroshenko by a margin of approximately 73 percent to 25 percent. Zelensky, who has never held elected office, is most well known for his role playing a teacher-turned-president on television. The peaceful process, the challenger’s victory, and the incumbent’s immediate acceptance of his loss attest to the strength of Ukraine’s democracy despite enormous obstacles and interference from a neighbor. This electoral history provides a strong base and a rallying point for reformers.

Was this a vote against Poroshenko or for a different version of reform?  Incumbency is a well-known danger in Ukrainian elections – only one president, Leonid Kuchma, has won reelection – but the magnitude of Zelensky’s victory sends a clear signal that Ukrainians are once again hungry for reform.

Poroshenko is seen as a vestige of an old Ukraine driven by corruption and oligarchic interests. He carried out sufficient reforms to (barely) satisfy IMF requirements and put Ukraine’s economy on the path to recovery but lacked the political will to tackle the high-level corruption and impunity that have hamstrung Ukraine’s development since independence.  Poroshenko, who took office in the dangerous days after Crimea and the start of the war in the east, often seemed focused on keeping oligarchs on side for as long as possible and so was unwilling to dismantle networks of economic, political, and judicial forces that protected businesses born in the chaos of the 1990s.

Zelensky, who has been dubbed “the Ukrainian Trump” due to his television celebrity and status as a political outsider, is in many ways the living embodiment of a new Ukraine. A generation younger than Poroshenko, Zelensky will be the first Ukrainian president to have come of age in independent Ukraine, with the potential to break the “homo sovieticus” mold of corrupt and self-interested governance. He is also Jewish and a native Russian speaker who managed to transcend Ukraine’s traditional east-west divide, winning the support of both native Russian speakers in the country’s east and Ukrainian nationalists in western cities like Lviv. More than anything, Zelensky – who provided few specific policy prescriptions and campaigned largely via social media rather than traditional campaign events – represents a break with Ukraine’s political establishment. In the run-up to the election, more than 60 percent of his supporters viewed voting for Zelensky as a protest vote.

Zelensky is a blank slate onto which Ukrainians have projected their desire for a leader strong and independent enough to stand up to the oligarchs and put citizens’ interests first. He has made vague pledges to do so, and he counts several notable reformers among his advisors – former Minister of Finance and rumored future foreign minister Oleksandr Danyliuk, former Minister of Economy Aivarus Abromavicius, anti-corruption crusader Ruslan Riaboshapka, and Member of Parliament Serhiy Leshchenko. In the hours following his election, Zelensky promised new faces in government, including the replacement of Prosecutor General Yuriy Lutsenko, who has come to symbolize the rot in Ukraine’s justice system. The quality of those appointees will provide an early signal of Zelensky’s commitment to reform.

…But Will They Get It?

Despite his lack of political experience, Zelensky has his own questionable connections with highly entrenched interests. Zelensky’s television show, “Servant of the People,” is broadcast on a channel owned by self-exiled Ukrainian oligarch and Privat Group founder Ihor Kolomoisky. In 2016, to preserve the stability of the financial system, the Ukrainian government nationalized Privat Bank and used $5.6 billion in taxpayer funds to fill a hole in the bank’s balance sheet, which it maintained Kolomoisky and his business partner had created through fraudulent activities. Kolomoisky, who also has significant energy and media holdings, has sufficient Russia ties to smooth his business dealings and at times act as a go-between, raising questions about potential Russian influence. Zelensky and Kolomoisky maintain that their relationship is limited and purely professional, and Zelensky has vowed to punish any wrongdoing by Kolomoisky and keep Privat Bank out of his hands. However, journalists have uncovered shared business partners, bodyguards, and advisors that may indicate deeper ties.

Oligarchic backing has long been a near-requirement for most Ukrainian politicians. But the combination of Kolomoisky’s notoriety and his public support for Zelensky’s candidacy will – and should – put their relationship under a microscope. Kolomoisky said recently he would return to Ukraine if Zelensky became president, and the oligarch has recently and in quick succession won three cases against the Ukrainian government related to the nationalization of Privat Bank. Given the notorious corruption within Ukraine’s court system, the timing of the verdicts so close to the election is suspicious. While the National Bank of Ukraine and the Ministry of Finance have appealed the verdicts, the rulings have sown sufficient doubt on the nationalization and accusations of fraud and embezzlement against Kolomoisky to smooth his return. This will put Zelensky’s pledge to hold him accountable to an early test. ASG expects that the IMF will express interest in finding funds lost in Privat Bank, and this will shore up the new president’s resolve.  Lost money rarely is found, but learning where it went, who guided it on its way, and how it can be prevented may be an accomplishment for a reform presidency. Beyond Privat Bank, Kolomoisky’s interests in the energy industry give him ample incentive to exert whatever influence he may have, particularly following Russia’s recent announcement of a ban on oil and petroleum product exports to Ukraine.

Whatever his ties to Kolomoisky, Zelensky will have his work cut out for him when he takes office in late May. The major challenges facing Ukraine remain the same – moving forward on the country’s European path while fighting a Russia determined to stymy that effort.

The absence of a serious pro-Russian candidate in the election demonstrates how much has changed since Russia’s invasion of Crimea and the Donbas in 2014. Ukraine’s westward orientation is no longer in question, and European and U.S. leaders have signaled their eagerness to work with the new president to push forward his reform agenda. Russian malign activities continue, and Putin – who has pointedly declined to congratulate Zelensky on his victory – will likely seek to test the new president early in his tenure. Zelensky has pledged to breathe new life into negotiations to implement the Minsk Agreements and make the return of Ukrainian hostages held in Russia and eastern Ukraine his first priority. A Russian think tank close to the Kremlin has already suggested little change in relationships but has noted a range of possibilities, including a Georgia-like warming of relations even while territory remains occupied by Russian-backed forces.

Zelensky will also need to prove he has the mettle to force the passage – and crucially, the implementation of – politically difficult reforms. The next tranches of Ukraine’s $3.9 billion stand-by agreement with the IMF are due for release in May and November, but this will require a deeply unpopular gas price hike and continued progress on financial and banking sector reform, anti-corruption measures, and the privatization of state-owned enterprises. Key markers of Zelensky’s commitment to reform will be his ability to stand up a truly independent anti-corruption court that successfully prosecutes high-level cases, his willingness to tackle land reform, and his commitment to open and transparent privatization processes for state assets, including in the gas sector.  His administration’s openness to concerns of foreign investors will also provide a test, although it will take some months for his administration to organize itself for this purpose.

Parliamentary elections scheduled for October 29 will give Zelensky little time to demonstrate his reformist credentials and ability to govern before his Servant of the People Party faces its first major electoral test. Zelensky must decide soon whether his party will field a full slate of candidates or form a partnership with one or more existing political parties. Several factions of reformers are already rumored to be in discussions with Zelensky and his team to do just that.

With a new president and parliament taking office in quick succession, the next 12 months represent a rare opportunity to shape the Ukrainian government’s agenda. Investors and businesses operating in Ukraine have much to gain if Zelensky can break the hold of oligarchs on government and fulfill his campaign promises to clean up corruption, privatize state assets, and initiate land reform. While Zelensky’s lack of political experience is a liability in some respects, it provides a unique opportunity to impress upon the new team governing Ukraine the concerns and reform priorities of business and investors.