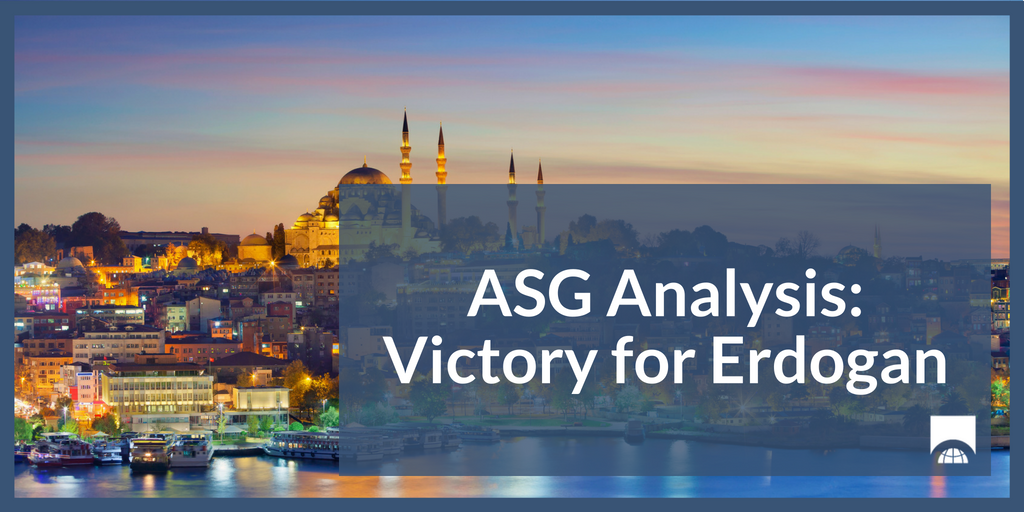 Erdoǧan won Turkey’s presidential election in the first round with 52.59% of the vote. This result nearly equals his 2014 total, this time against a much more dynamic opposition and with Turkey’s highest turnout in years: 87% of Turks voted. Erdoǧan polled above both his party and the 2017 referendum in favor of changing to the presidential system. After more than 16 years, he remains the singular figure in Turkish politics.

In parliament, Erdoǧan’s Justice and Development Party (AKP) fell short of a majority, but the success of its nationalist coalition partner (the Nationalist Movement Party, or MHP) carried the coalition to a majority. MHP’s success was the election’s biggest surprise, surviving a deep split and nearly doubling what polls had suggested it would receive. The Turkish Parliament will be the most diverse in recent history and includes the Kurdish People’s Democracy Party (HDP), despite its leadership being in prison.

AKP influence over mass media and the broader environment influenced the election’s outcome. Still, the opposition remains stuck with the support of nearly half the country. And nearly doesn’t cut it against a leader who has remained motivated, resolute in the use of state power, and able to get his supporters to the polls.

Key domestic dates for 2018 are July 5, when the election result will be confirmed, and October 1, when parliament returns from recess. High on the agenda will be legislating to put in place the presidential system, which requires as many as 6,000 pieces of legislation to be amended. During the campaign, the current Deputy Prime Minister, Bekir Bozdaǧ, promised to end the state of emergency, but already the junior coalition partner has called for it to remain in place. In between, Erdoǧan will put in place his cabinet and senior leadership.

March 2019 is scheduled to bring municipal elections. This should provide an opportunity for the opposition to test its strength outside traditional strongholds.

Despite the AKP - MHP parliamentary victory, coalition politics will be worth monitoring. The election results have positioned the MHP to play power broker.  MHP leader Devlet Bahçeli, for example, may ask Erdoǧan to place MHP leaders in senior positions, including in the cabinet, and to make substantive concessions on legislation.  Erdoǧan has been a master of shifting coalitions, and may field offers from some in the opposition coalition to keep the MHP from becoming comfortable as kingmaker.

Erdoǧan’s economic advisors will be an important indicator of how he plans to address Turkey’s growing economic problems. President Erdoǧan promised to be more involved in economic policy, a prospect that has disturbed currency markets. However, AKP sources have suggested that key posts will be filled by experienced, reliable executives from the private sector. One point of consistency in the new government will be Finance Minister Naci Ağbal, who will be solid on policy but may not impress investors as much as other potential candidates. Any other outcome will disturb investors and hasten the weakening of the economy.

The state of emergency has been used to justify large-scale firings, incarcerations, prosecutions, and restrictions on the freedom of speech. AKP sources have said that it will be ended in October, but the MHP has said that it should remain in place. What happens will be an early sign of how Erdoǧan intends to govern a country with a majority that remains just above 50%. Throughout the AKP’s 16 years in office, it and its leader have been challenged in different (sometimes illegal) ways by diverse forces, including segments in the military, the judiciary, Gulenists, secular groups, the Kurds, and even factions within the party. Now each of those groups is weakened, and the president’s power is particularly strong. One option would be to focus on issues that could add to the AKP’s base and attract new voters. This would call for a return to the pragmatism of the first two terms in office, especially on economic matters. But President Erdoǧan thus far has shown a preference for beating his opponents, not for offering them inducements.

Security will remain a concern. Extremists groups, losing their bases in Syria, likely will seek targets elsewhere. Turkey may become a target as well as a possible transit route.

Tensions between the U.S. and Turkey have subsided for now but will return periodically until the United States determines its policy in Syria and Iraq. The U.S.-Turkish announcement of progress in Syria helped the AKP, coming shortly before the election, but did not signal either an interest in intervening in Turkish politics or a definitive resolution of issues in Syria. Now, long-simmering issues will return to the fore, including the detention of an American pastor (and Turkey’s desire for the return of a Turkish religious figure from the U.S.), the purchase of Russian surface-to-air missiles, and a fine to be levied on a major Turkish bank.

There should be relatively little change in Turkey’s relationships with Europe in the near term. Turkey’s role in managing the flow of migrants makes it an important partner, even while it continues to be the focus of criticism over civil liberties. The president’s proposed new organization of the government eliminates the separate department for negotiations with the European Union, a recommendation that sends a political signal but is also a recognition that the office has had little domestic authority for years. The upcoming European Council and NATO summits may provide windows into this relationship.

For business, the complete overhaul of Turkey’s government means that attention can turn to governance. For several years, the government has worked to develop and implement policy in the face of an attempted coup, disputes within the AKP, multiple elections since 2015, and the expected transition to a presidential system. At times this has made decision-making difficult to predict. Now, the structure of Turkey’s new presidential administration, the key cabinet members, and major policy proposals Erdoǧan hopes to pursue will begin to take shape.