ASG Analysis: What to Expect from the Ambitious New German Coalition Government 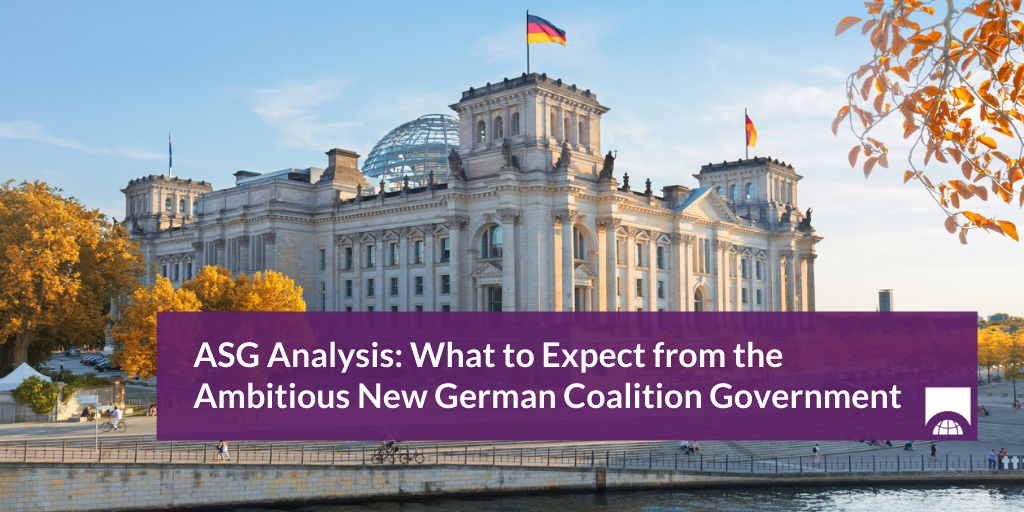 Germany’s incoming coalition government’s detailed policy program, or Koalitionsvertrag, for its five-year term is titled “Dare More Progress.” It outlines a broad and ambitious vision for Germany focused on progressive policies and attracting investments in climate, digital technology, and health care. The program is primarily intended for party membership, but it also serves as the guardrails for the coalition, as governments usually fulfill more than 75 percent of promises in the document by the end of the term.

Some of the major landmark policies include:

The combination of assertive environmental policies with liberal social policies aims to tackle the government’s priority domestic macro issues: climate change and socioeconomic inequality. The government’s approach is notably business-friendly: it seeks to open avenues for investment in renewable energy, housing, and mobility while also using social policies to boost living standards in Germany. The new immigration policy will also allow companies and organizations to recruit talent from abroad to live and work.

The new government has also highlighted the need to boost investment in green technologies, health, and digitalization. Its program particularly focuses on increasing state research and development spending to 3.5 percent of GDP. Lauding German biotechnology’s role in developing the mRNA Covid-19 vaccine, the coalition aims to increase investment in health research, including by creating data hubs and investing in cutting-edge medical technologies. On health, the program highlights the need to create a framework for stockpiling medicines for health crises, securing medical supply chains, and digitalizing healthcare delivery. It also aims to legalize cannabis, which would make Germany the first country in Europe to do so.

Business leaders across the Atlantic should see these policies as an opportunity to engage with the government on its priority areas, such as digitalization and biotechnology research and development, among others. The combination of the center-left policies of the SPD and Greens with the business-friendly FDP means the government is unlikely to lean into overbearing regulation, while creating ample avenues for engagement with the private sector.

Before discussions on major domestic policy reforms can begin, the government will have to tackle the rise in Covid-19 cases in Germany, the Omicron variant, and a relatively low vaccination rate. Scholz has favored a mandatory vaccination policy, which is likely to become one of the new government’s first policies as the country prepares for the holidays. The new health minister, Dr. Karl Lauterbach of the SPD, is a renowned epidemiologist and will be tasked with implementing a possible vaccine mandate and additional Covid-19 policies.

Under the new government, foreign and European policy will be led by the Greens’ co-leader Annalena Baerbock, a notable appointment due to her strong human-rights- and values-based foreign policy approach. Baerbock is likely to represent the biggest personnel divergence from the previous government, which often favored a softer, quiet line on human rights due to commercial interests. Reflecting her tougher stance, the policy program includes more explicit mentions of addressing China’s relationship with Taiwan and ongoing human rights violations in Xinjiang than past public stances.

An early sign of how the new government will lead globally will come through its presidency of the Group of 7 in 2022, where it can shape the global response to Covid-19 and climate change. The new government’s program for the G-7 outlines commitments to strengthening multilateralism, establishing an “international climate club,” beginning to design a global emissions trading system, and increasing Germany’s international climate financing.

U.S.-Germany relations are likely to improve with the new government. The Biden administration is likely to find a German government more aligned on issues like human rights, which will benefit Washington’s goal of securing European support on dealing with China.

Germany’s policy towards Russia bears monitoring. Foreign Minister Baerbock has called for a harder line than Chancellor Merkel’s cautious, behind-the-scenes approach. The new chancellor, however, echoes his party’s traditional preference for engagement, and Russian President Vladimir Putin does not listen to ministers.

Russia poses an early test, given the risk of renewed military intervention in Ukraine. Technical delays in the approval of the Nord Stream 2 pipeline will put the new government in a bit of a holding pattern and leave it exposed to the possibility that developments on the ground end up forcing Germany to suspend the project. The crisis will also reveal whether Scholz is able to assert the kind of leadership role that his predecessor played in both European and trans-Atlantic debates during earlier manifestations of Russian adventurism. If the coalition tries to break ranks with the Biden administration and more hawkish EU member countries over Ukraine, it could set in motion a more difficult period in Berlin's dealings with Washington while limiting Germany's influence over European policy toward Russia.

On EU policy issues, the traffic-light government also marks a shift from Merkel’s gradualist approach towards a more reform-based platform. It calls for the use of pan-EU lists of candidates for the next European Parliament election in 2024, a policy supported by French President Emmanuel Macron. These lists would reform the Spitzenkandidat or lead candidate system by allowing each Europarty to nominate a lead candidate and a small list of supporting candidates to run in all EU member states for the presidency of the European Commission – similar to how most national elections in Europe are held. If agreed to before 2024, the transnational system would likely raise the profile of the EU’s top jobs and may present challenges to Commission President Ursula von der Leyen’s reelection. If the nominee for Commission president in 2024 is not German, the coalition agreement gives the Greens the right to nominate Germany’s European commissioner.

The program also endorses reassessing the EU’s fiscal rules to make concessions for climate and stability. It also prioritizes strong rule of law conditions for EU funds, a point directed at Poland and Hungary and a marked shift from Merkel-era appeasement. It also reaffirms that the joint debt borrowing under the pandemic recovery plan, called NextGenerationEU, should remain temporary.

Most importantly, a change in the chancellery in Germany means the EU’s largest economy and a leading voice in the European Council now shifts to a center-left figure. Scholz’s appointment comes alongside a new social democratic prime minister in Sweden, a new conservative chancellor in Austria, a liberal-conservative government in the Czech Republic, and a likely centrist government in Bulgaria, shifting the balance of the high-level decision-making of the European Council. 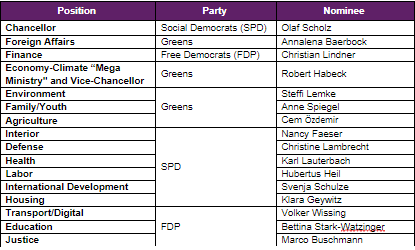