Via the U.S.-India Business Council. 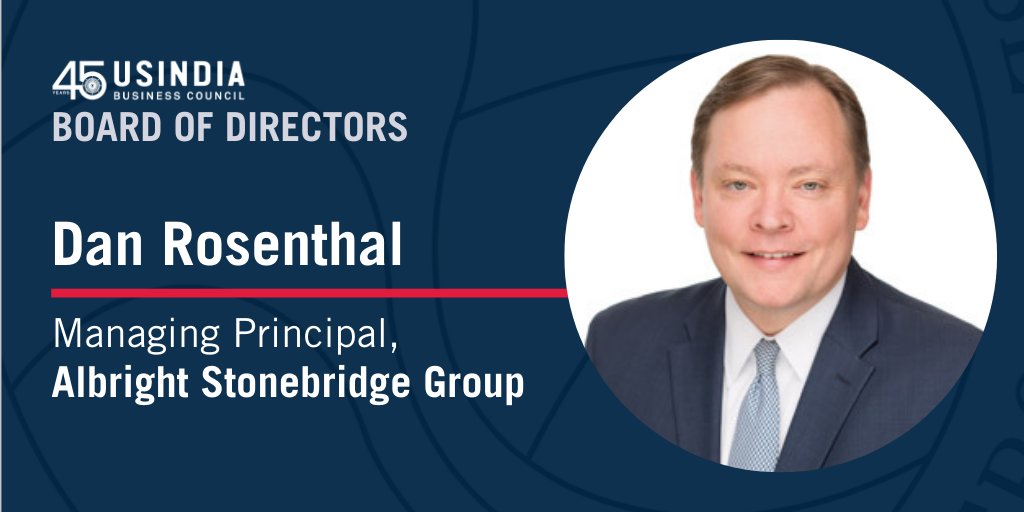 “Amid the historic disruptions of the COVID-19 pandemic, USIBC has adapted to a digital-first model for engaging our members and key stakeholders in the U.S.-India corridor,” said USIBC President Nisha Biswal. “As we close out our 45th anniversary and look to lay out a roadmap to the 50th, our new Board members will support the Council as we explore new ways to deliver value and advance member priorities.”

"With these great additions to the Board of Directors, USIBC strengthens its depth and expertise in important sectors like defense, infrastructure, and digital services, among others,” said Board of Directors Chair and Executive Chairman of Nuveen Vijay Advani. These sectors and the U.S.-India relationship will be a catalyst for economic growth in the years ahead, especially as we work together to rebuild after the pandemic."

Dan Rosenthal is Managing Principal of Albright Stonebridge Group (ASG), where is serves as chief executive officer of the global firm. He is also a member of the Investment Committee of Albright Capital Management LLC, an affiliated investment advisory firm focused on emerging markets. Since joining ASG in 2010, Mr. Rosenthal has overseen the firm's business development, communications, marketing, and legal functions. Prior to joining ASG, Rosenthal served as a senior executive with a California-based internet company, on the White House senior staff, at the Department of Commerce’s International Trade Administration, and at the U.S. Agency for International Development.

Dr. Vivek Lall was recently appointed Chief Executive of General Atomics Global Corporation. Most recently, Lall served as Vice President of Aeronautics Strategy and Business Development at Lockheed Martin and as an advisor to the U.S. Secretary of Transportation, which regulates U.S. and global aviation policies and technologies. Previously, he held numerous marketing and engineering leadership roles with The Boeing Company and worked for Raytheon and the NASA Ames Research Center.

Karan Bhatia is the head of global policy and government relations at Google, where he advises Google’s leadership on policy issues and leads Google’s work with policy makers, government officials, and key political stakeholders in the United States and around the world. Before joining Google in 2018, Bhatia served as President of GE’s Government Affairs & Policy function and in senior positions in the U.S. Government, including at the Departments of Commerce and Transportation. Prior to his government service, he was a partner in the Washington, D.C. law firm Wilmer, Cutler & Pickering.

Bob Pragada is the President and Chief Operating Officer (COO) of Jacobs. Since joining Jacobs in 2006, Pragada has held several senior management positions including Senior Vice President, Global Sales; Group Vice President, Northern Region (United States and the Republic of Ireland); and Vice President, Field Services. He returned to Jacobs in 2016 after serving as President and CEO of the Brock Group. Pragada previously served as an officer in the U.S. Navy Civil Engineer Corps for 9 years where he rose to the rank of Lieutenant Commander.

Paul Knopp is Chair and Chief Executive Officer at KPMG LLP. He also serves as Chair of the Americas region and is a member of both KPMG’s Global Board and Management Committee. Prior to becoming Chair and CEO, Knopp’s multi-decade career as an audit partner at KPMG focused on serving leading global companies in the manufacturing, life sciences, transportation, professional services and technology industries. He served as the global lead audit engagement partner and Engagement Quality Control Review Partner for KPMG audits of numerous Fortune 500 companies. He was elected to serve a five-year term on KPMG’s U.S. Board of Directors in 2012 and served as Lead Director of the Board of Directors.

The U.S.-India Business Council represents top global companies operating across the United States, India, and the Indo-Pacific.  Amid dynamic growth within the U.S.-India commercial partnership, we serve as the premier voice of industry and create connections between businesses and governments across both countries.  Through our flagship Washington, D.C. and New Delhi offices, as well as presences in Mumbai, San Francisco, Chicago, Boston and New York, we work with members to identify and advance key policy priorities.  Recognizing that U.S.-India trade is increasingly driven by new business hubs, USIBC is also focused on strengthening connections between cities and states.

The U.S. Chamber of Commerce is the world’s largest business federation representing the interests of more than 3 million businesses of all sizes, sectors, and regions, as well as state and local chambers and industry associations. Its International Affairs division includes more than 80 regional and policy experts and 25 country- and region-specific business councils and initiatives. The U.S. Chamber also works closely with 117 American Chambers of Commerce abroad.