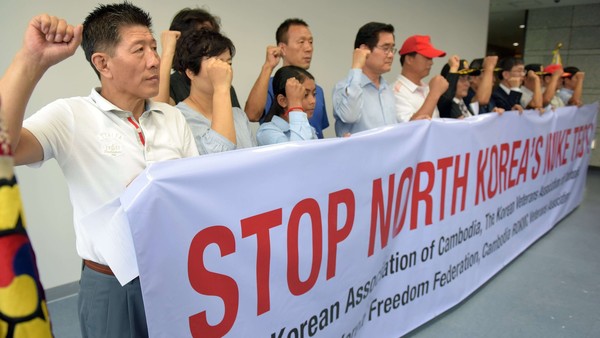 Her words came hours after the US House of Representatives voted overwhelmingly in favour of new legislation to step up unilateral American sanctions against North Korea.

Yet even as new sanctions loom, North Korea’s biggest test to date has thrown into stark relief the failure of existing ones to halt its nuclear progress — and with China still unwilling to cast its treaty ally into economic ruin, analysts see little hope that the next round of measures will achieve that goal.

Part of the problem with existing sanctions against North Korea is that they are relatively narrow, says Evans Revere, a former US diplomat in Asia now at the Brookings Institution.

“North Korea is often described as the most heavily sanctioned country in the world, but that’s hardly the case,” he says. “There are a whole range of measures taken against Iran that were not taken against North Korea — and the irony is that Iran does not have nuclear weapons.”

US sanctions against Iran that helped force it into nuclear concessions included swingeing measures against foreign banks that assisted it in evading sanctions. Current and former officials say Washington has mostly shied away from such moves with respect to North Korea for fear of creating a diplomatic clash with China, on whose banks Pyongyang is believed to rely.

The North Korea Sanctions Enforcement Act passed last week seeks to strengthen the US stance by obliging the president to take firm action against people or entities who knowingly assist banned activities by North Korea.

“It’s a forcing mechanism,” says Joshua Stanton, a lawyer who helped draft the legislation and has criticised the government for holding back from firmer action against Pyongyang.

Despite a UN report detailing "crimes against humanity" in North Korea, he notes, the US has not imposed human rights-related sanctions against North Korea — as it has against countries such as Myanmar and Burundi. Supreme leader Kim Jong Un has never been singled out for US sanctions, unlike Zimbabwe’s Robert Mugabe and Belarus’s Alexander Lukashenko.

Yet even the new House bill stops short of forcing action against non-compliant Chinese banks: any breach of sanctions must have been “knowing” and the president can waive action if it would affect national security.

Mr Revere notes that previous financial sanctions proved successful in “getting the attention” of North Korea in 2005, when the US froze $25m of North Korean assets held in Banco Deltha Asia, a small bank in Macau. But action against a large Chinese bank would be a more serious matter. “Since we already have a North Korea problem, do we want a China problem? That’s the one thing you want to avoid,” he says.

As well as its indirect impact on US sanctions, foreign diplomats say China has consistently sought to limit the scope of UN Security Council sanctions against North Korean nuclear work and arms imports. Its implementation of the sanctions has also been questioned — notably in 2012, after Pyongyang paraded a missile launcher with marked similarities to a Chinese model.

After North Korea’s third nuclear test in 2013, China hardened its stance, with measures including the closure of accounts held at major Chinese banks by Pyongyang’s Foreign Trade Bank.

But Beijing’s verbal response to the January 6 test has been milder than in 2013, despite admonitions from the US that its strategy for restraining North Korea “has not worked”. The test followed recent Chinese efforts to revive the stalled six-party talks on Pyongyang’s nuclear programme, and to improve the bilateral relationship with North Korea. In October it sent a member of the elite Politburo Standing Committee to festivities in Pyongyang — the first visit by such a senior official under Mr Kim’s rule.

“Xi Jinping seems determined to get a rapprochement with North Korea after two years of a hardline approach,” says Shi Yinhong, a professor at Renmin University. “This policy change is the result of long deliberation, and may still have momentum.”

Mr Shi says China’s efforts to pursue a friendlier strategy with North Korea undermine the chances of strong new sanctions in the forthcoming UN Security Council resolution, as do frayed US relations with China and Russia. “The powers of co-operation to deal with NK are weak . . . this is not a good time,” Mr. Shi says.

Analysts say the existing sanctions have probably slowed the pace of North Korea’s nuclear development, while damaging its profitable illicit income streams from drugs to counterfeit dollar bills. But North Korea has shown signs of reducing its exposure to financial sanctions, in part through moving to trading in cash. The number of North Korean messages sent using the Swift financial system fell from an average annual level around 40,000 in the eight years to 2011 to less than 2,000 in 2013.

Under Mr Kim’s four-year rule Pyongyang has asserted its right to nuclear weapons ever more assertively, amending the constitution in 2013 to proclaim its status as a nuclear power. Chinese nuclear experts told US counterparts last year that Pyongyang may have had as many as 20 nuclear warheads at the end of 2014, a figure that could double by the end of this year.

North Korea’s regime is “the type most resistant to the successful application of sanctions,” Joseph DeThomas, a former state department adviser on North Korea, wrote last week on the 38 North website. “[It] is able to impose tremendous hardship on its population and its ruling elite are inward-looking [and] authoritarian in the extreme . . . Sanctions large enough to deter North Korea are also likely to be of the type that might tip it into a desperate war.”