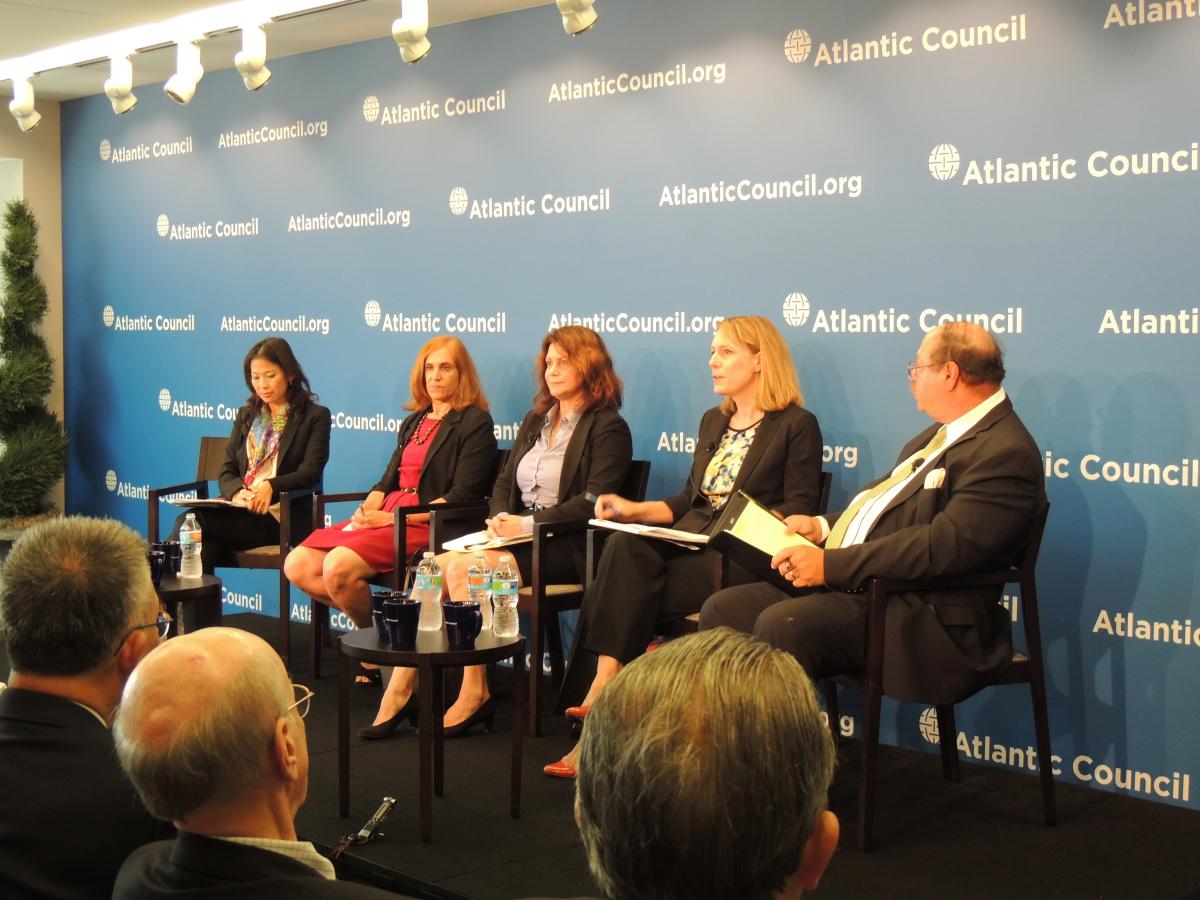 Cross-Straits Series: Implications of the Upcoming Taiwanese Elections to the Asia-Pacific

The upcoming Taiwanese presidential election on January 16, 2016 has drawn increasing attention to Beijing and Taipei's relationship. In Taiwan, the Democratic Progressive Party (DPP) presidential candidate, Tsai Ing-wen, has been projected to defeat the ruling Kuomingtang (KMT) Nationalist Party candidate in 2016 by different polling agencies. For eight years, KMT has taken a pro-China stance, which helped stabilize the relationship between the two governments. How will the election results affect Taiwan’s relationship with China and other Asia-Pacific countries?

On September 9, the Brent Scowcroft Center on International Security’s (BSC) Asia Security Initiative hosted a Cross-Straits Series event on the timely issue of the implications of the upcoming Taiwanese elections to the Asia- Pacific. The discussion brings together Dr. Carla Park Freeman, Associate Director of the China Studies Program at the Johns Hopkins School of Advanced International Studies (SAIS); Ms. Meredith Miller, Vice President for Southeast Asia at the Albright Stonebridge Group; Mr. Robert A. Manning, Senior Fellow of the Brent Scowcroft Center on International Security at the Atlantic Council; and Ms. Bonnie S. Glaser, Senior Advisor for Asia at the Center for Strategic and International Studies. The discussion was moderated by Ms. Nike Ching, Senior Foreign Affairs Correspondent with the Voice of America Mandarin.

The session began with remarks from Ms. Glaser on the Taiwanese perspective. She stated a few trends of Taiwan’s political environment. There have been growing voices of dissatisfaction with the governance, food safety, and economy competitiveness in Taiwan, especially from the youth. The changing political environment in Taiwan is also marked by an increasing number of people who self-identify as Taiwanese, not Chinese. There is no doubt that all these political trends contribute to the increasing support for DPP. She also commented on US concerns about the future of Taiwan in terms of defense and the economy.

Dr. Freeman provided a Chinese perspective. She referred to how President Xi Jinping’s attitude has been toward Taiwan, remaining firm on the 1992 Consensus, which is the outcome of a meeting in 1992 that elicited the term "One China." When it comes to China’s expected reactions to the changed leadership in Taiwan, there are two different sides. On the negative side, Xi would take a harder line, constraining international space to Taiwan more than ever before. Or, on the positive side, China would take pragmatic steps to develop good ties with DPP, as a continuation of its relations with the KMT.

Southeast Asian countries should also be considered as stakeholders in a possible Cross-Straits crisis, Ms. Miller said. In terms of regional stability, several Association of Southeast Asian Nations (ASEAN) countries have territorial claims on the South China Sea, overlapped with China. In terms of regional economic integration, ASEAN is making enormous efforts to exert leadership in Asian economic integration. However, although Taiwan is considered a key factor to accomplishing the objectives of ASEAN, Southeast Asian countries’ behaviors would still intensely depend on the reaction of China after the Taiwanese election.

Lastly, Dr. Manning spoke from Northeast Asia’s perspective. Northeast Asia, which consists of Japan and the Republic of Korea, would be placed at the forefront if a Cross-Straits crisis happens, also involving the United States and China. Japan has troubled relations with China dealing with the East China Sea. The United States is also greatly involved in the issue, taking Japan’s side. Concerning Korea, it is not expected to play a role in the crisis, but to stay neutral because of its ambiguous position between the United States and China, who are the country’s greatest partner of security and the most important economic partner, respectively.

Link to the full article here.