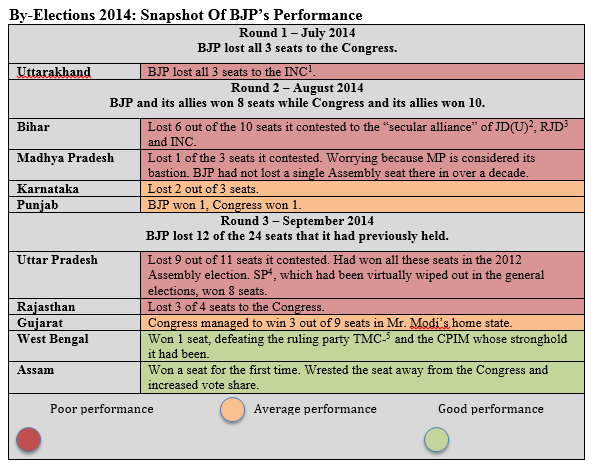 Almost five months have passed since the Bharatiya Janata Party’s resounding victory in the Indian general elections, and the atmosphere has largely been positive and full of possibility. However, in August and September, the party suffered its first political setback in the form of a series of losses in several local elections at the state level. The party has now set its sights on two major states – Maharashtra and Haryana – where large-scale state assembly elections are a fortnight away.

The BJP’s poor performance in the by-elections has come only four months after its decisive national victory in May, when it won 282 of 543 Lok Sabha (lower house) seats to become the first party in over three decades to win a clear majority without the need for allies. In Uttar Pradesh, the BJP had defeated powerful incumbents to win 72 out of 80 seats, and in states like Gujarat and Rajasthan, the party won every seat it contested. Political analysts attributed the party’s performance to a combination of anti-incumbency and the popularity of now-Prime Minister Narendra Modi among India’s burgeoning middle class

However, the BJP’s electoral defeat in the by-elections demonstrates the complexity of India’s federal structure. Arguably, these elections are fought on different planks like caste and local issues. For instance, many attribute the party’s losses in India’s largest state, Uttar Pradesh, to an out-of-touch, polarizing campaign. In Bihar, a strategic alliance of the other major parties (including two former ruling parties supported by lower and middle castes) led to the BJP’s defeat.

Although some analysts opine that the BJP’s dismal performance in the three rounds of by-elections presage a poor performance in the upcoming state elections, it is important to note that the by-polls were not large-scale state assembly elections, but individual polls for only a handful of seats that had fallen vacant in some state assemblies. The mood in these small pockets of the country does not reflect the mood in other states.

While opposition parties were quick to point out that the BJP’s poor performance is an indication of Modi’s waning popularity, analysts believe that these results cannot be attributed to people’s opinion of the Prime Minister. It is important to note that Modi did not personally campaign in any of the constituencies, lending credence to the view that the BJP derives its relevance from the Prime Minister. Interestingly, Modi is now going to hold three political rallies in Mumbai (Maharashtra) – the first time that a Prime Minister will campaign in a Maharashtra state election – and he is likely to also campaign in Haryana as well.

The assembly elections should no doubt be closely watched. In Maharashtra, two key alliances – BJP with Shiv Sena, and Congress with the National Congress Party (NCP) – have broken up. In Haryana, there will be a tough contest between the incumbent Congress and the BJP.

The BJP is looking to take advantage of anti-incumbency in both states to register victories. Its losses in the by-elections could serve as an antidote to the complacence that some observers believe might have set in following the party’s sweeping victory on the national stage. After the by-election defeat, BJP President Amit Shah, who led Modi’s presidential-style campaign in the national election and is now spearheading the party’s campaign in the two states, urged party workers to focus on the imminent state elections.

Currently, there are only 7 BJP-led state governments out of 30 and these potential victories could serve to expand its footprint at the state level. Increasing its tally by acquiring two important high-income states could help the Centre garner political bargaining power and electoral support over the next few years.