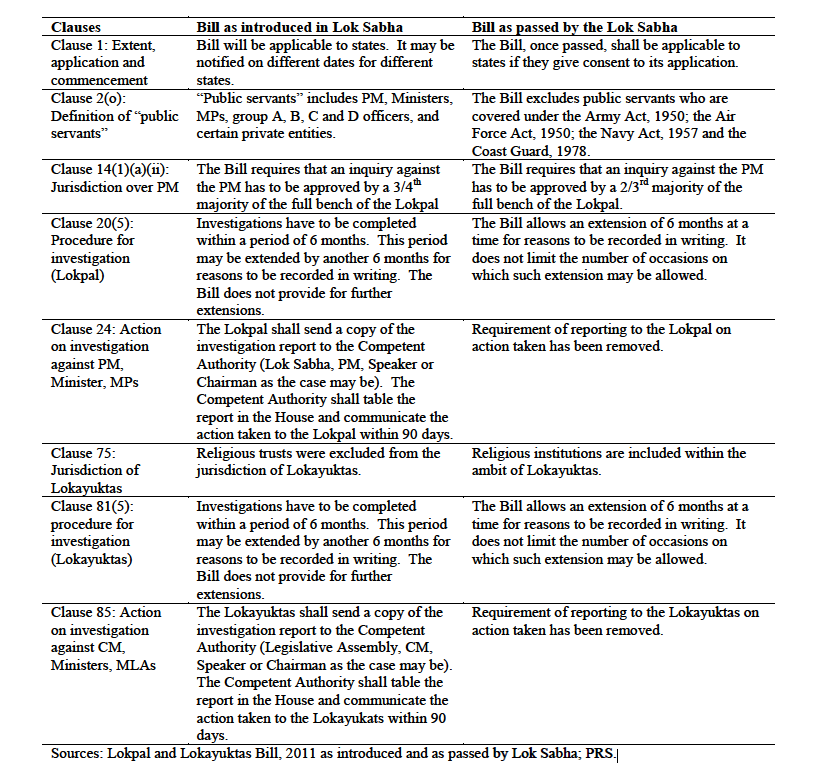 The Indian Parliament has passed the much-debated and highly contentious Lok Pal (Ombudsman) Bill. The Bill creates a new independent agency empowered to investigate charges of graft by setting up a strong anti-corruption ombudsman to probe corruption in the top echelons of the government.

Public servants, including the prime minister (with certain safeguards), ministers, members of parliament and other officials, fall under the purview of the Bill. NGOs, the private sector and public-private-partnerships were excluded despite strong demand – especially by the Left Parties – for their inclusion.

The passage of the Bill by the Lower House of Parliament (Lok Sabha) on December 18 comes after it was passed by the Upper House (Rajya Sabha) a day earlier. It is now only one step away from coming into force, as it requires the assent of the President of India to be signed into a law.

Incidentally, It became the first bill to be passed during the 12-day Winter Session of the Parliament and, after the passage of the Bill, both houses of Parliament were adjourned sine die – two days ahead of the scheduled close on December 20.

The Parliament has tried to pass the Lok Pal Bill eight times previously. Earlier bills to create a Lok Pal have lapsed seven times in the past, and in 1985 one was even withdrawn.

From the time the anti-corruption activist Anna Hazare began his first fast at Jantar Mantar in April 2011 demanding enactment of a Jan Lok Pal bill drafted by his team, the Bill became a veritable tinderbox, with a two year history full of twists and turns.

In the months preceding Hazare's highly popular nationwide campaign, the government constituted a Group of Ministers, headed by then Finance Minster, and now President of India, Pranab Mukherjee, which suggested a range of anti-corruption measures, including the Lok Pal bill. Hazare only ended his fast when the government formed a joint drafting committee consisting of ministers and civil society members. Two separate drafts were proposed, with the government introducing a version that was widely criticized as flawed.

The Bill was then referred to the Parliamentary Standing Committee. Hazare went on a fast again, only for the government to re-introduce the Lok Pal and Lokayuktas bill, which was passed by the Lok Sabha in December 2011, and then introduced in the Rajya Sabha in 2012 and promptly referred to a Select Committee. A week ago, Hazare began yet another fast demanding the urgent introduction of a new anti-corruption law. The amended Bill was then tabled in Rajya Sabha, with the Lok Sabha finally passing the Bill earlier this week.